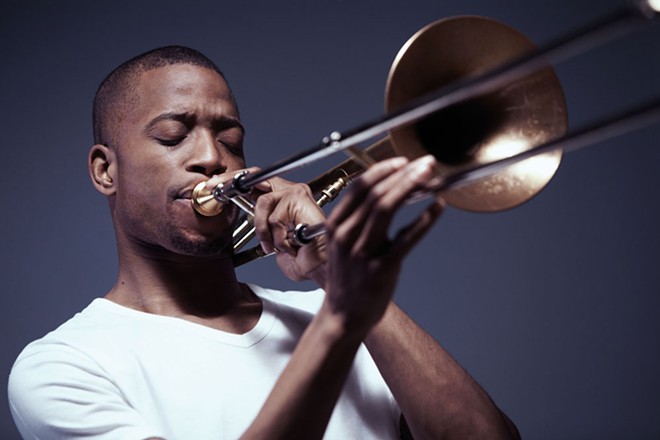 Trombone Shorty and his band Orleans Avenue are dropping by The Fox in August.
You could make the case for a few cities being the heartbeat of American music — New York, Nashville, Austin, maybe even Seattle or Portland.

I would argue for New Orleans being the ultimate, though, thanks to its collision of cultures and styles. And right now, there's probably no performer out representing New Orleans' music better than Trombone Shorty and his band Orleans Avenue (all due respect to any touring Marsalis family members).

You'll see Trombone Shorty described as a "jazz" artist, but don't let that lull you into thinking his show is some somber recital for erudite, elbow-patched aging hipsters. He incorporates serious funk, soul, gospel and R&B sounds into his music, as well some hip-hop, for concerts basically guaranteed to get you on your feet and moving throughout.

You'll have the chance to see for yourself when Trombone Shorty headlines The Fox on Sunday, Aug. 13. Tickets are $40 and $50 and go on sale Wednesday night at midnight. You can get them through TicketsWest outlets or The Fox box office during regular hours.

Trombone Shorty is touring behind a new album, Parking Lot Symphony, on which he and his band knock out killer originals and covers of fellow New Orleans artists The Meters ("It Ain't No Use") and Allan Toussaint ("Here Come The Girls").