Learning to live with dandelions, Spokane's infectious-disease response plan, and why do we lie? 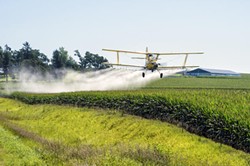 2,4-D: Bad for your pets, bad for your kids, bad for you.
The chemical compound 2,4-D that dispatches weeds without hurting your grass may, unfortunately, be hurting your pets, you or your kids. Originally developed as a chemical weapon to “starve” Axis powers  in World War II by destroying their potato and rice crops, 2,4-D was a failure. Potatoes and rice were untouched by it. But weeds weren’t. Now it is widely used on farms, and is the most common herbicide found in suburban areas. But there are serious doubts about just how safe it is.

According to a report from public radio station KCET in Burbank, California, “The International Agency for Research on Cancer, a division of the World Health organization, classifies 2,4-D as a possible human carcinogen, mainly due to the chemical’s ability to cause genetic damage. Exposure has been linked to low sperm counts and male reproductive damage in animals, as well as reduced litter sizes. Dogs who lay on lawns treated with 2,4-D have a significantly higher risk of developing cancers.”

Might be better to just learn to live with dandelions.

Practice makes perfect
What if a plane lands in Spokane carrying a passenger suspected of having a highly infectious disease like Ebola? You’ll be happy to know that the city has a response plan for just such an event. The plan will be put to the test next Wednesday in what’s described as a “full-scale exercise” involving multiple players including the fire department, sheriff’s department, state and local departments of health, LifeFlight, and the U.S. Department of Health and Human Services. A “patient” will be transported from the airport to the “Special Pathogens Unit” at Sacred Heart Children’s Hospital, established in response to the Ebola epidemic in 2015.

You can’t hide your lyin’ eyes
Fake news, alternative "facts"… why do people lie? Explore the psychology of not telling the truth in the current issue of InHealth.