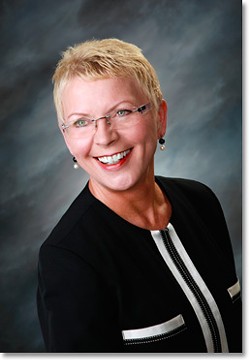 Courtesy of SFCC
Gullickson is leaving SFCC for another community college, in Virginia.
Janet Gullickson, Spokane Falls Community College president, has accepted a job in Virginia and will resign from SFCC effective July 1.

Gullickson has been SFCC president since 2012. She's leaving to take over as president of Germanna Community College in Fredericksburg, Virginia, where two of her children live.

"I love SFCC. I love the students, faculty and staff, and it's a fabulous place to work and be," Gullickson tells the Inlander. "But it isn't where my kids are."

Darren Pitcher, SFCC vice president, will take over as acting president for a year while Community Colleges of Spokane conducts a nationwide search to replace Gullickson, according to a CCS press release.

"I am tremendously honored to be chosen as acting president and look forward to supporting the work of our faculty, staff and students here at Spokane Falls Community College," Pitcher said in a statement.

Gullickson points to success SFCC has had in adding three Bachelor's of Applied Science degrees. That includes a new Bachelor of Applied Science in cybersecurity that SFCC won approval for last month. The college recently began remodeling its gym. It also moved its courses in Pullman to Washington State University's campus, a move that allowed SFCC to keep its Pullman branch and cut costs.

But there have also been challenges. Gullickson says she had hoped that SFCC would increase the graduation rate more than it has in the past five years. The college — like Spokane and Tacoma community colleges — struggled implementing software called ctcLink, contributing to budget issues across the Spokane's (and the state's) community college system. That didn't play into her decision to leave, Gullickson says, but she says it was an issue. Coincidentally, the Virginia Community College System uses the same software, with few issues compared to Washington. 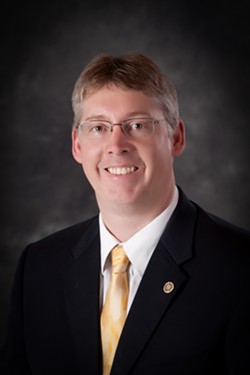 Courtesy of SFCC
Darren Pitcher will take over for Gullickson for the next year as acting president.
"I don't think we can underestimate how hard the implementation has been for any of our staff," Gullickson says.

Pitcher, her replacement, worked in leadership roles at Miles Community College in Miles City, Montana, for 13 years before joining SFCC.

"I cannot think of a better person to serve in this important role," CCS Chancellor Christine Johnson says in a statement. "Dr. Pitcher has demonstrated outstanding leadership and commitment as vice president and I know that dedication to service our students will continue in this new role."

Gullickson says she appreciated her time in Spokane.

"I really want to thank the Spokane community," she says. "They have been so gracious to me."

Learning to live with dandelions, Spokane's infectious-disease response plan, and why do we lie?

The Smokes are leaving Spokane, but you have one more chance to see them Friday