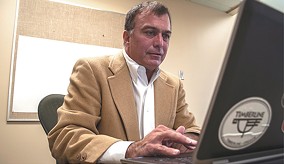 EWU professor Ed Byrnes
If you're African American or Native American in Spokane, you're generally more likely to be stopped, searched and arrested by police, according to a long-anticipated report on race and police-initiated stops in Spokane.

Additionally, Spokane police officers used force on Native Americans at disproportionately higher rates, compared to the percentage of times they were stopped. Native Americans, for example, were involved in 2.5 percent of police stops, but 9.3 percent of uses of force, according to the data analyzed by Eastern Washington University professor Ed Byrnes.

That data is the basis for Byrnes' and SPD Capt. Brad Arleth's second report on race and policing in Spokane, which has been on the minds of community members for years, and was one of the top priorities for Chief Craig Meidl when he took over as top cop last year. Byrnes says he hopes that this report will spark a community discussion concerning racial disproportionality in policing, as well as other areas of society.

Indeed, it's an issue immediately concerning to many in Spokane, considering a recent jury decision to acquit a white man for shooting a black man in the back, killing him. In that case, Edward Bushnell claimed that he was trying to stop William Poindexter from assaulting his girlfriend in July 2015 when the two men got into a fight. As Poindexter and the woman walked away, Bushnell shot Poindexter in the back. An all-white jury found that Bushnell acted in self-defense, sparking a strong reaction from the Spokane community this past weekend.

During a public discussion on Saturday, Rev. Walter Kendricks, pastor of Morning Star Baptist Church and president of the Spokane Ministers' Fellowship, suggested the potential that the Department of Justice review the case, the Spokesman-Review reports.

Byrnes' report, which focuses solely on police-initiated contacts with citizens, largely follows results of the analysis released in 2015, but also includes data broken down at the neighborhood level.

For the most part, neighborhood-level data follows the citywide trend that people of color are stopped at disproportionally higher rates than their representation in the city's population. But officers are not necessarily stopping people of color in one neighborhood more often than another, Byrnes concludes.
"This is not a simple matter," he says. "As a community we need to understand that yes, racial disproportionality exists, but the problem is nuanced."

For example, the majority of searches happen during an arrest, as opposed to "safety frisks," leading Byrnes to conclude that "it therefore does not appear that SPD officers are creating reasons to search people on the basis of race."

Additionally, if the officer is white, the likelihood of that officer searching a person or making an arrest "decreases significantly." Minority group members make up about 8 percent of the city's police force, but conduct 12 percent of searches and are responsible for 13 percent of arrests, Byrnes says.

Ultimately, Byrnes and Arleth, who together initiated this research into the relationship between race and policing, recommend that the city assemble a commission made up of officers and citizens to address the racial disparities.

In the wake of Byrnes' and Arleth's first report, the Mayor's Advisory Council on Multicultural Affairs formed a workgroup that reviewed police policies and training programs, but did not ultimately write a report.

Byrnes says he is encouraged by the fact that the Spokane Police Department voluntarily participated in the study, and has fully cooperated with the data collection.

"That gives me some faith that line officers as well as leaders have this on their mind," Byrnes says. "And that they can productively sit down with members of the community, who are affected, and get somewhere."