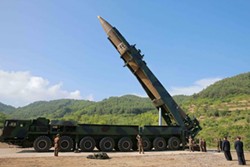 North Korea had a successful missile test on July 4.
ON INLANDER.COM

Good times, bad times
Sammy Hagar's set last week gave fans a taste of the prodigious rocker's continuing talent, but left some feeling the show must go on after a 15-song set that ended before the sun had fully set.

North Korea tensions rise with intercontinental missile test
With the reportedly successful test of a missile that could reach Hawaii, the New York Times reports, "'Self-restraint' is all that is keeping the United States and South Korea from going to war with the North, the top American general in South Korea said on Wednesday." (NYT)

Woman attacked by bear near Priest Lake
A woman and her dogs were attacked by a bear near the Priest Lake visitor center yesterday, the Spokesman-Review reports. She was seriously injured and taken to Sacred Heart. (S-R)

Not my...declaration?
NPR tweeted out the full text of the Declaration of Independence yesterday, and as could be expected, some people didn't catch on, and others who did were upset, because why not, it's the internet after all? Some folks went so far as to call the 241-year-old political language propaganda, in a perceived jab at the president. (Mediaite, Buzzfeed)


The few angry tweets that got the most attention got plenty of backlash: