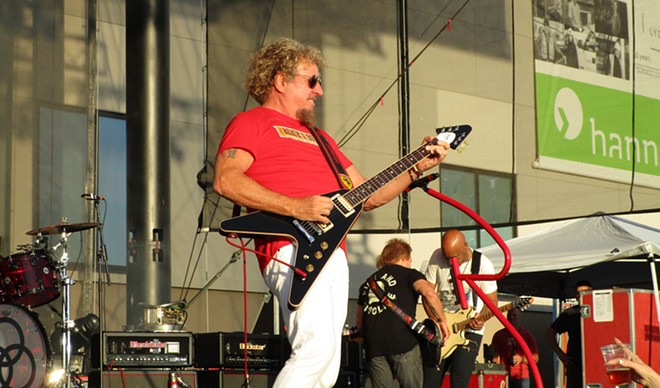 Hagar still sounds great as he prepares to turn 70 later this year, and he's the same happy-go-lucky party monster fans have come to know and love through four decades of hits as a solo artist and with bands like Van Halen, Montrose and Chickenfoot.

Hitting the stage after a video montage showcasing his time in the rock 'n' roll spotlight, Hagar played guitar, took slugs of booze out straight from the bottle, danced and chatted up the crowd between giving a lot of good-hearted shit to bass player Michael Anthony, a longtime friend and musical partner since their time together in Van Halen.

Dan Nailen
Jason Bonham (left), Michael Anthony and Sammy Hagar braved some serious sun.
Hagar's band this tour is The Circle, and it's an all-star crew consisting of Anthony, Jason Bonham (son of Led Zeppelin's John Bonham) on drums and guitarist Vic Johnson — the least-known musician on stage, and probably the most impressive on Friday, as he knocked out killer solos and lead-guitar work on songs originally done by guitar geniuses like Eddie Van Halen and Joe Satriani.

The setlist was satisfying, including a number of monster hits that lesser bands would build a whole hour set around. Hagar touched on his early Montrose years with "Rock Candy." He played a few of his solo hits, including the raucous opener "There's Only One Way to Rock," the clear crowd favorite "Heavy Metal" and "I  Can't Drive 55," which really pales when played next to other, far better songs. The Van Halen years were well represented thanks to tunes like "Poundcake," "Why Can't This Be Love" and "Finish What Ya Started" (this countrified tune was probably the best Van Halen track of the night." And Hagar threw in one Chickenfoot ("Big Foot") and a few Zeppelin covers, too ("Good Times, Bad Times" and "When the Levee Breaks" were great fun thanks to Bonham's bashing, and the show closed with "Rock and Roll").

It's a testament to Hagar that the beer lines were long and active all night, from well before he hit the stage right up until they closed them down.

The bummer, though, was that Hagar and Co. only played a 15-song set, including the two-song encore. And even though Hagar's son Andrew Hagar (aka "Drew Haggis") played an unadvertised and brief opening set of acoustic folk (not bad, either!), the show felt stunted when it came to an abrupt end as the sun was still setting.

I've seen people leave shows early, but Hagar's show had the opposite ending — a lot of people milling around inside the venue feeling like there should be more music. It's always good to leave the people wanting more — and Hagar is no spring chicken — but no doubt many fans left both satisfied at what they heard, and listing songs in their head they wish he'd played.

Trump wrestles with CNN, poll says civility on the decline, Christie's day at the beach, and morning headlines