Trump wrestles with CNN, poll says civility on the decline, Christie's day at the beach, and morning headlines 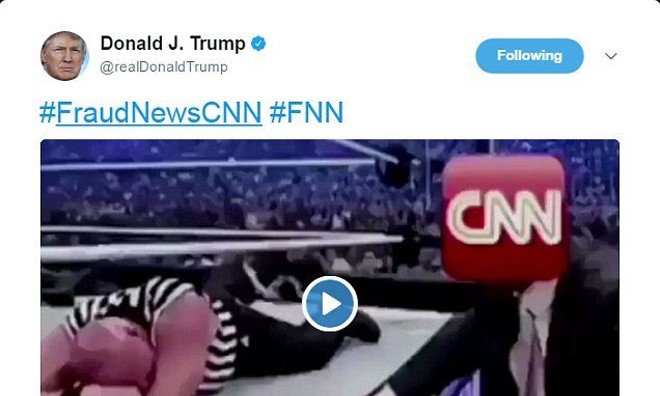 President Trump was busy on Twitter again this weekend, with CNN the latest object of his cyber-scorn.
ON INLANDER.COM

NEWS: The President of the United States tweeted a video over the weekend showing him wrestling with and punching "CNN." (via the New York Times)

NEWS: Proposed cuts to Medicare in the stalled Senate Republican plan to repeal and replace the Affordable Care Act would put life-changing services at risk for millions of Americans most at risk. (via the New York Times)

THIS WEEK: Celebrate your independence from run-of-the-mill July events with La Luz at the Bartlett, Fred Armisen at the Bing, and bucking bulls at the 50th annual Cheney Rodeo.

Uncivil behavior
On the eve of our nation's 241st birthday, 7 in 10 Americans believe that civility in the U.S. has declined since Trump's election, according to a new PBS NewsHour/NPR/Marist University poll; 61 percent said they do not place much trust in the Trump administration. Trust in Congress and the media is low, while trust in the intelligence community and the courts is high, according to the poll. (NPR)

Differing opinions
White House official Thomas Bossert said on ABC 's "This Week" that he's "proud" of Trump's tweets: "He's the most genuine president... I've seen in my lifetime." But the conservative National Review says that Trump's obsession with the media will be his undoing.

Wrestling's fake; this isn't
In other politics-related wrestling news (or wrestling-related politics news), there's a new "heel" unlike any other on the Appalachian Mountain Wrestling circuit: the Progressive Liberal, whose signature finishing move is the "Liberal Agenda." (NPR/Sports Illustrated)

Shutdown times 11
Eleven states, including New Jersey (see below) enter the new budget year with their governments shut down; Washington is not one of them., as Gov. Jay Inslee signed a two-deal budget deal in Olympia with minutes to spare Friday night. (ABC News/ USNews.com)

Drawing a line in the sand
After ordering the state's beaches closed due to a budget impasse, New Jersey Gov. Chris Christie and his family spent their Sunday on one of the same beaches he had ordered closed down. Not surprisingly, Garden State beachgoers aren't happy. (CNN)

One dead in South Hill shooting
One man is dead after an officer-involved shooting following a domestic violence incident Sunday night on Spokane's South Hill. (KHQ)
Two killed in SR 27 crash
A fiery crash off of State Route 27 early Saturday morning claimed the lives of a 20-year-old woman and 21-year-old man from Spokane Valley. A 21-year-old Spokane Valley man who was driving under the influence is being held on two counts of vehicular homicide. (KREM/Spokesman-Review)