This Fourth of July, be smart and leave the fireworks to the professionals in order to avoid serious injuries.
A first-of-its-kind study by University of Washington Medicine researchers has identified the type of fireworks that cause the most severe injuries — shell-and-mortar fireworks.

Since 1999, about 10,500 people have been treated for fireworks-related injuries every year in the U.S., according to the U.S. Consumer Product Safety Commission. However, there hasn’t been a lot of data collected on what types of fireworks cause the most severe injuries, says Dr. Monica Vavilala, director of the Harborview Injury Prevention and Research Center, in a statement.

These style of fireworks typically instruct users to put the barrel-like mortar on the ground, drop in the shell, light the fuse and run. However — even when done correctly — accidents can still occur, with severe consequences. 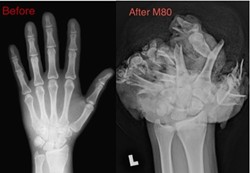 Talsaniahands.org photo
An X-ray of a human hand, before and after an M-80 exploded in it.
The study reviewed the cases of 294 people admitted to Harborview Medical  Center for severe fireworks injuries from 2005 to 2015 to determine which types of fireworks cause the most injuries, as well as identifying injury patterns and severity.

Megan Phillips, assistant fire marshal for the Spokane Fire Department, says she can’t speak for the numbers, but she’s not surprised.

“Some of the heavier-duty fireworks have the potential to create devastating injuries to people," Phillips tells the Inlander. “There are professionals out there who have licenses, and they know what the safety rules are, and they follow those. So my advice would be not to mess around with any of those larger-caliber fireworks at all.”

While shell-and-mortar fireworks are among the list of legal fireworks that can be sold and possessed in the state of Washington, possession and use of all consumer fireworks are banned in Spokane County. This applies to the cities of Spokane, Spokane Valley, Cheney, Millwood and Liberty Lake. Possession or use of illegal fireworks can result in a $536 ticket.

This year marks the 25th year that the ban has been in effect, and an estimated 2,200 fires have been prevented over the years as a result, according to the Spokane Fire Department.

In Idaho, a new opinion from the state Attorney General’s Office has made aerial fireworks illegal for sale to the general public. This opinion effectively closes the commonly understood loophole that allowed aerial fireworks to be sold, as long as the purchaser signed an agreement saying he or she would not set them off in Idaho.

According to the UW study press release, the next step for them is to use the data to change policy and personal behavior to prevent injuries in the future.