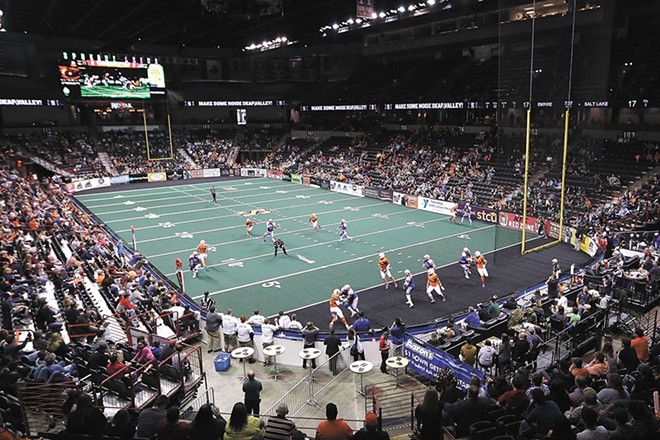 Young Kwak photo
The Empire's demise likely means the end of indoor football in Spokane, at least for now.
The Spokane Empire’s 2017 season ended not with a bang, but with a whimper.

The other two incarnations of Spokane’s indoor football teams won league championships in their inaugural seasons. After switching leagues in 2016, the Empire looked to win an inaugural title again for a third time. But Sioux Falls beat them 55-34 in the final.

The Empire’s off-the-field woes were much worse. Revenue from ticket sales and sponsorships were declining. Karen Kiehl, the Empire's former director of operations, says that an indoor football team is content just to break even, and the Empire didn’t. On Wednesday, the team’s owners announced that they would not return for the 2018 season.

In a press release, the owners said they will spend the season looking to establish more local sponsors or finding someone to purchase the team, which could mean another league switch, relocation or the end of indoor football in Spokane. The Empire’s future is unclear.

Despite 12 wins in their first Indoor Football League season, the Empire was struggling. They were forced to change names, from the Spokane Shock, because the Arena Football League, the previous league they played in, owned the name and wanted $250,000 for it, Kiehl says. They decided to save the money and change names.

Kiehl says she believes the name change hurt the organization, but they didn't have much of a choice, and moving from the AFL to the IFL was the right move.

“We went from big markets like San Jose and Philadelphia to more places like Des Moines, Iowa,” she says. “That business model was more sustainable.”

Kiehl says Spokane did not fit in with the AFL, which now only has five teams, all of which are based in much larger cities, all in the Eastern time zone.

The IFL has nine teams — 10 before Wednesday’s announcement — in cities of comparable size to Spokane, but the switch did not solve their problems. Spokane was still geographically isolated from the others and, Kiehl says, the perception among fans was that they switched to a lesser league, so fewer people cared to buy tickets.

Two other IFL teams, the Salt Lake Screaming Eagles and the Colorado Crush, ran some fan-engagement experiments, allowing fans to discuss play strategies with the coaches. Kiehl says the Empire also experimented with this, but did not receive enough fan support to keep it going, an indicator that the audience was dwindling.

The Empire also struggled on the field, Kiehl says. Expectations were high after a conference-winning, 12-4 season, but multiple player injuries, especially on the offensive line, threw them off their game. After a strong 7-2 start to the season, the Empire lost six of their final seven games to finish with an 8-8 record.

Kiehl says the Empire is beginning to put away equipment in storage and making sure they can take care of the players still nursing injuries. All of the players will become free agents on Aug. 1.

“He made a really tough decision, and he made a business decision,” Kiehl says of majority owner Nader Naini. “There is only so much money you can lose over the years.”