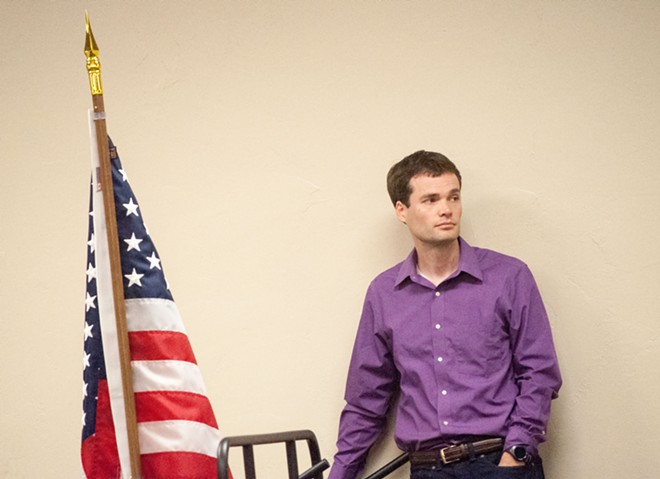 Daniel Walters photo
Andrew Biviano, chair of the Spokane County Democrats, has been pushing to get the party out from under the cloud of Public Disclosure Commission issues.
If you're hiring an attorney to respond to a serious Public Disclosure Commission complaint, you probably can't do much better than Michael Connelly. He's not only an attorney, he's the former commissioner and chair of the PDC.

So when the Spokane County Democratic Party was facing an state attorney general investigation into months of late-reported, unreported and misreported Public Disclosure Commission reports, Connelly was exactly who they hired to review their response.

Now, another PDC complaint has accused the Spokane County Democrats of yet another PDC violation — for failing to report the money they paid or owed Connelly.

"I think it just annoyed me that they were not even trying to be in compliance, considering the fact they are in court with the AG right now," says complainant Glen Morgan, the Thurston County Republican responsible for a number of recent PDC complaints against Democrats. "It just confounds me."

Morgan writes in his complaint that the Spokane County Democrats hired Connelly to respond to his previous PDC complaint, and alleges that the Democrats have received bills from the attorney. But he says he can't find their evidence on the PDC filings. Morgan argues that the legal bills should have been recorded as payments, debt or an in-kind contribution.

"However, the [Spokane County Democrats have] chosen to violate the law instead, possibly and astoundingly in cooperation with a former PDC commissioner as legal counsel, who absolutely knows better than allowing his client to overtly violate the law like this," Morgan writes. "This specific violation of the statute is exceptional and unexplainable in this context."

But Andrew Biviano, chair of the Spokane County Democrats, said that shortly before the Inlander alerted him to the complaint last Friday, his team had already identified the error and amended their filings to include the money the Democrats owe Connelly.  He says that, in fact, Connelly has not been advising or reviewing the PDC reports the Democrats have been submitting.

Morgan also accused the Democrats of being late to report two reimbursements related to bringing Nina Turner, a state senator from Ohio, to speak at the Tom Foley Legacy dinner on March 25.

"The [Spokane County Democrats have] habitually failed to accurately report debt for the following known and predetermined expenditures," Morgan writes. "Even during litigation, and despite 'hundreds of hours' spent 'coming into compliance,' there seems to be a total unwillingness to comply with this statute."

"I think it just annoyed me that they were not even trying to be in compliance considering the fact they are in court with the AG right now."

But Biviano sees the exact opposite narrative. He points out how his team of volunteers have day jobs, and just came on in January, but have still managed to accurately report almost all the 2017 filings — while simultaneously fixing erroneous 2016 filings.

"He’s trying to create this image of a runaway train," Biviano says. "But this is the best he’s got with a fine-toothed comb. Three mistakes that have already been fixed."

Biviano says he's not embarrassed at all about how the Democrats are doing.

"People need to know that the Democratic Party is doing well," Biviano says. "We’re compliant. We’re doing a good job at catching our own mistakes, the few that there are."

"If he can make their lives as miserable as possible, he may deter them from participating in the process," Biviano says.

Morgan is by far the most prolific filer of PDC violations in the state. He's filed seven complaints this month alone. Biviano compares the stress that Morgan puts on the system to a hacker overloading site with traffic as part of a denial-of-service attack.

"He likes to make everything salacious as possible," Biviano says. "He’s on over 100 complaints right now."

"He’s trying to create this image of a runaway train. But this is the best he’s got with a fine-toothed comb. Three mistakes that have already been fixed."

Some of the complaints Morgan has filed — like one describing the Spokane County Democrats' initial pile of apparent violations — he felt were legitimately outrageous. But many of the other complaints, concerning more niggling violations, were filed to make a point: Morgan feels the PDC rules comprise a broken system.

When asked if the latest issue he's targeting the Spokane County Democrats with is one of the pieces of campaign finance law he'd like to reform, Morgan was torn. In particular, he acknowledges that the way that debt is reported to the PDC is odd.

Often, campaigns will bring in someone with an accounting background, only to find that the standards of accounting — like how debt is reported — are different in major ways from Washington state's finance laws. But he's not exactly sure how that should be fixed.

"As I've gotten into this more and more, I've gotten more of the background on why each of the little requirements ," Morgan says. "I understand that dishonest political campaigns that run on the edge will [build up] a bunch of debt, and then won’t report it until after the campaign."

Either way, Morgan's crusade hasn't earned him many friends on either side of the aisle. He exclusively targets Democrats, but Republicans aren't happy with him either.

"They don’t like the fact that I’m doing this at all right now," Morgan says. "[I have] more Republicans pissed at me for filing these complaints."

Morgan says they're worried that Democrats are going to retaliate against Republican groups with a series of their own PDC complaints.

"Everybody is worried about a tit-for-tat kind of battle," Morgan says.

So far, such a battle hasn't come to pass. If it does happen? Morgan welcomes it. If there are problems with the PDC regulations — and he says there are — a PDC war could be revelatory.

"It builds a greater data set to make a judgment call to influence whatever reform is necessary," Morgan says.

By contrast, despite having his organization hammered by Morgan's complaints, Biviano thinks the PDC system is working pretty well as it is — though it could certainly use more funding.

"The goal here is to get the information to the public," Biviano says. "It’s there. It’s all out."