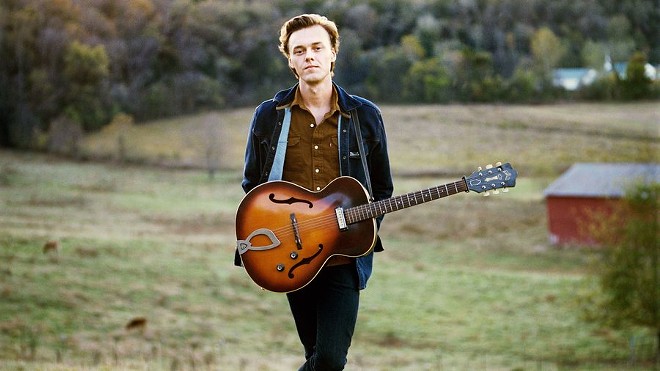 Parker Millsap headlines Thursday at the Bartlett.
We're shutting down July with a week full of fun to be had throughout the Inland Northwest. You can find myriad options in our event listings and Staff Picks. Here are some highlights of the week ahead:

OUTDOORS | Head to the Shadle Library for a Fly-Tying Basics class. It's never too late, nor to soon, in life to become a fisherman/fisherwoman.

LIVE BANDS | Chicago's Sidewalk Chalk blends myriad styles into a sound entirely their own. A little jazz, a little hip-hop, soul R&B and funk all pop up in songs that will stick in your head. They headline tonight at the Bartlett. Here's a little sample:

VISUAL ARTS | Spark Central is hosting a DIY Screen Printing Party, so just bring a blank shirt and be ready to make some fashion magic.

LIVE BANDS | Herb Alpert and Lani Hall headline a show at the Fox. You know him from his classic album Whipped Cream and Other Delights.

LIVE BANDS | Last summer, Parker Millsap came through town and delivered an excellent show full of tunes from his self-titled album and breakthrough follow-up The Very Last Day. Here's hoping there are some new tunes in the works for this headlining return to the Bartlett. Here's one of his best:

FESTIVAL | It's opening day of the Watershed Festival at the Gorge, the annual three-day country throwdown that this year has a rare Chris Stapleton appearance in the Northwest. That's reason enough to go brave the heat.

FESTIVAL | It's Skyfest weekend at Fairchild Air Force Base, so prepare to be amazed by flying feats Saturday and Sunday, including the Thunderbirds air show.

FESTIVAL | It's the second Unifest, this time taking place outdoors in downtown Spokane, bringing a mix of music and art and a pop-up market to your Saturday night.