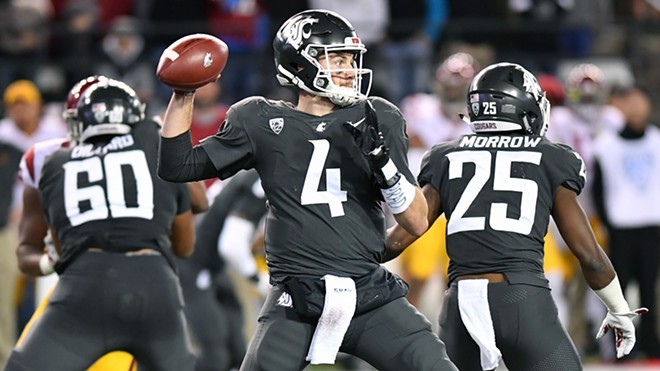 WSU Athletics
Luke Falk — coming off a 34-of-51, 340-yard, two-touchdown performance against USC — and the undefeated, 11th-ranked Cougars hit the road for the first time in 2017, traveling to Eugene to face the 4-1 Ducks at Autzen Stadium.
Can a Duck fly with one broken wing? Let alone two?

Washington State will find out Saturday in Eugene (5 pm; KAYU 28, KXLY 920 AM) when the 11th-ranked Cougars, undefeated through five games and 2-0 in Pac-12 play, hit the road for the first time this season in a North Division clash against unranked Oregon (4-1, 1-1) at Autzen Stadium.

WSU is coming off the signature win of the Mike Leach era, a thrilling, come-from-behind, nationally televised 30-27 victory over then-No. 5 USC last Friday at Martin Stadium; normally, this matchup would have all the makings of a trap game, with the Cougars, having drained their emotional well eight days earlier, facing a dangerous opponent on the road.

But that was before Oregon's Pyrrhic victory over Cal last Saturday night in Eugene: the Ducks ran away from the Golden Bears, 45-24, but in the process lost their two most important offensive players — starting quarterback Justin Herbert, a 6-foot-6, 230-pound sophomore who plays well beyond his years, and top running back Royce Freeman, a 6-foot, 238-pound battering ram who's poised to smash every Oregon rushing record in his final year before taking his physical game to the NFL.

Freeman left the game in the first quarter with a shoulder injury, and did not return. He is expected to play, but his effectiveness is in question. Oregon is well-stocked at running back — second- and third-stringers Kani Benoit and Tony Brooks-James could start for most teams in the country — but the quarterback situation is far more dire in Eugene.

Herbert suffered a broken collarbone on a first-quarter touchdown run and is expected to miss 4 to 6 weeks. His backup, undersized senior Taylor Alie, a former walk-on, has been inconsistent in limited action — he's thrown 34 passes in four years with the Ducks — and left the Cal game in the fourth quarter with what appeared to be a concussion. True freshman Braxton Burmeister entered the game, burning his redshirt and completing his only pass for four yards. Rivals.com rated Burmeister the nation's seventh-best dual-threat quarterback after he threw for 4,461 yards and ran for 1,470 more last season at La Jolla (California) Country Day School. Two more true freshmen, one recruited as a wide receiver, back up Burmeister.

If that seems like an underwhelming quarterback situation for a team that played in the national championship three years ago, it is. The Ducks are paying the price for a notably poor record of recruiting and retaining quality quarterbacks over the past five years; since Marcus Mariota's arrival in 2011, ending in the school's first Heisman Trophy three years later, Oregon has signed seven quarterbacks, incuding four 4-star prospects. All but Herbert and since-departed Jeff Lockie washed out, with five of the seven transferring after a year or two.

A big part of the problem was Oregon's inability to replace Mariota, who left for the NFL after his junior year; they brought in dual-threat graduate transfers in 2015 (Eastern Washington's Vernon Adams) and 2016 (Montana State's Dakota Prukop), sending a message to those on the roster — as well as potential recruits  — that developing quarterbacks was less than a high priority for the program. The lightly recruited Herbert, who played at Engene's Sheldon High, a few miles from campus, beat out Prukop as a true freshman last year; he's the first quarterback the Ducks have successfully developed since Mariota.

The Cougars have no such problems at quarterback — record-breaking senior Luke Falk, one of the country's best QBs, completed 34 of 51 passes for 340 yards and two touchdowns last week against the Trojans and has lit up the Ducks for 876 yards and six TDs, completing 70 percent of his passes with no interceptions, in victories the past two years. Jamal Morrow, who ran for 91 yards and a score against USC, averaging 15 yards per carry, and James Williams are a powerful 1-2 punch in the backfield. In last year's 51-33 rout of the Ducks, the Cougs rolled up 280 yards on the ground (7 yards per rush) and six touchdowns, two apiece by Morrow, Williams and Gerard Wicks.

Oregon's defense has improved this year under new coordinator Jim Leavitt, who turned Colorado's defense into one of the Pac's best the previous two years, but the Cougars' offense is by far the most potent that a fairly green Ducks unit has faced this season. Getting consistent pressure on Falk is a must for Oregon, which has the talent to do it. The Ducks blitzed often and effectively against Cal, but the Cougs have a better O-line than the Bears.

There's an interesting subplot on the other side of the ball: Will the presence of Joe Salave'a on the Oregon sideline be a greater motivation for the Ducks, or for the Cougars? Salave'a, Washington State's defensive line coach from 2012 through 2016, left Pullman for Eugene in January as a key hire for new Oregon head coach Willie Taggart; in addition to coaching the D-line, the eight-year NFL veteran is also the Ducks' associate head coach. Salave'a, responsible for the significant Samoan and Polynesian presence on the Cougars' roster, including WSU's most dominant defender, junior tackle Hercules Mata'afa, is having the same impact in Eugene.

Two Cougars you won't see at Autzen Stadium are freshmen Zaire Webb and Anthony White, Jr.; Webb, a defensive back, and White, a wide receiver, were dismissed from the team after being arrested by Pullman police for allegedly attempting to shoplift $225 worth of merchandise from a Walmart in Pullman on Wednesday night.

The bottom line: It's difficult to see how Oregon (a 2½-point underdog which is opting for an all-yellow look on Saturday night) holds the high-octane Cougar offense under 30 points — WSU has torched the Ducks for 127 points the past three years — and the Ducks, with two quarterbacks who are question marks, could be hard-pressed to put up 30 points against a WSU defense that stepped up and shut down USC when it needed to.

The weather, which looked yesterday like it could become a factor, likely won't be: Any rain should be light and winds moderate, good news for a team that throws the ball 55 times a game, completing 74 percent of those passes. The Ducks' corresponding numbers (mostly Herbert)? 29 and 69.