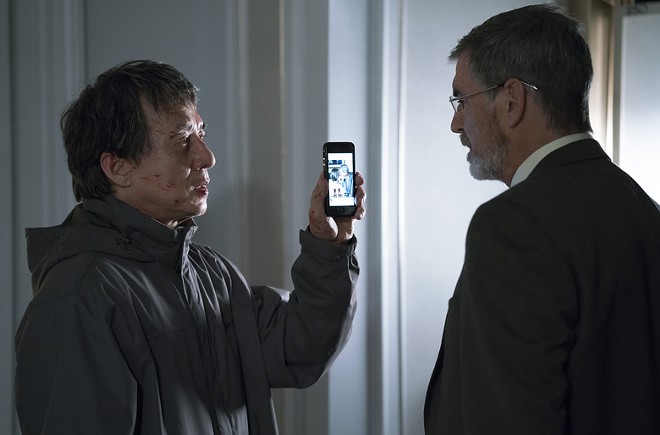 Jackie Chan and Pierce Brosnan in The Foreigner.
We're in that weird limbo between blockbuster season and Academy Award season, when most of the films hitting screens are mostly genre exercises and probably-not-Oscar-worthy odds and ends. This week's cinematic offerings including a couple of biopics, a dark Jackie Chan vehicle, and a teen slasher movie just in time for Friday the 13th.

DOLORES (at the Magic Lantern)
A documentary about the life of civil rights activist Dolores Huerta, best known for founding California labor unions in the 1950s and ’60s alongside César Chávez. Huerta, still active at 87, discusses adversity and gender inequality; other interviewees include Hillary Clinton, Gloria Steinem and Angela Davis. Not rated.

THE FOREIGNER
Jackie Chan is an immigrant restaurateur whose daughter is killed in a terrorist bombing, and he seeks revenge on the people responsible for the attack. It's an OK action-drama, says Seth Sommerfeld in his 2½-star review, but its tone is inconsistent and its moral compass is all out of whack: "Seeing Chan back in action delivers a decent supply of thrills, but ultimately The Foreigner tops out as a decent run-of-the-mill action flick with the real fun swapped out for an attempt at gravitas." Rated R.

HAPPY DEATH DAY
A slasher version of Groundhog Day (or Edge of Tomorrow), wherein a popular college girl is offed by a masked killer, wakes up that same morning alive and well, then gets killed all over again. The only thing that will end the cycle: She needs to uncover the murderer’s identity. Rated PG-13.

MARSHALL
Biopic veteran Chadwick Boseman (42, Get on Up) stars as Thurgood Marshall, the Supreme Court’s first African-American justice, who's assigned to represent a black chauffeur accused of raping a white woman in 1941. Rated PG-13.

PROFESSOR MARSTON AND THE WONDER WOMEN
The narrative drama of Wonder Woman's creation in the 1940s by William Moulton Marston, a psychologist who used the progressive, feminist ideals of his wife and mistress to define the ethos of the beloved superhero. Rated R.

Blade Runner 2049
BLADE RUNNER 2049 (3½ stars)
The long-awaited sequel to Ridley Scott’s 1982 sci-fi masterpiece turns out to be a meditative, leisurely paced art film disguised as a franchise cash-in. Building upon the rich, futuristic world of the original, director Denis Villeneuve's sprawling epic allows itself room to breathe, aided by some of the most stunning images of cinematographer Roger Deakins' career. Rated R.

BRAVE (re-release) This 2012 Disney-Pixar production won the Oscar for Best Animated Feature and focuses on the fiery-haired Princess Merida, who, armed with her trusty bow and arrow, must reverse a charm that has turned her mother into a bear. Rated PG.