Spokane County, with some exceptions, will no longer ask job applicants about their criminal record, joining a national push to "ban the box" and give candidates with convictions a fair chance. 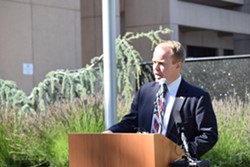 Wilson Criscione photo
Spokane County Commissioner Josh Kerns: ""We wouldn't want to disqualify a good candidate because of something that happened back in their past."
Kerns and Mary Kuney adopted the policy change Tuesday. From now on, employment applications no longer will ask if a candidate has been convicted by a court of law within the past 10 years. The county will not run a criminal background check on candidates until after the county has determined the applicant is otherwise qualified for the position.

"We wouldn't want to disqualify a good candidate because of something that happened back in their past," Kerns tells the Inlander. "That was our thought on it."

The policy change has been in the works for four or five months, says Tim Hansen, Spokane County Human Resources Director. Hansen says French approached HR then wanting the department to look into how it could change its policy. Nationwide, 150 cities and counties have adopted ban-the-box policies, according to the National Employment Law Project. The county's policy, Hansen says, is similar to city of Spokane's policy, changed in 2014.

"We actually modeled ours pretty heavily after the city's," Hansen says.

In 2016, out of 14,000 applications processed by county HR, only four percent were eliminated due to a conviction occurring in the last 10 years, according to the county.

Departments dealing with public safety — such as the Spokane County Sheriff's Office, detention services, and court systems — are excluded from the policy.

"The whole basis of this approach would be to look at the experience, the skills, and then once we felt like they were a viable candidate, at that point we would do a criminal background check," Hansen says.

Rick Eichstaedt, executive director of Spokane's Center for Justice, which has pushed for ban-the-box legislation statewide, says he was happy to hear about the county's change in policy. He was encouraged that the conservative board of commissioners supported the idea after the mostly liberal Spokane City Council did so years earlier.

"This indicates that it's not a liberal vs. conservative issue," he says. "It's: 'How committed are we to get back to work after people come out of a system?'"

The next step, he says, is for such policies to extend to the private sector. So far, those efforts have been unsuccessful both in the city of Spokane and statewide, the latter despite 6th District Sen. Michael Baumgartner, a Republican, coming around to the idea earlier this year.

"Frankly, passing it statewide gets rid of concerns that businesses have, that this is going to create an unfair regulatory burden," Eichstaedt says. "If it applies statewide, then everybody in the state has to comply with it."

Eichstaedt says the Center for Justice hasn't pushed for a ban-the-box policy for the private sector on a county level. And if he did, he may see little support. Kerns says requiring private businesses to "ban the box" would be outside of the county commission's role.

"I don't think it's our place in county government to do that," Kerns says. "This is something that we feel is going to be able to work for us, and I think this is more of us leading by example, rather than mandates."

A visit in the night: Inlander readers share their ghost stories