A visit in the night: Inlander readers share their ghost stories 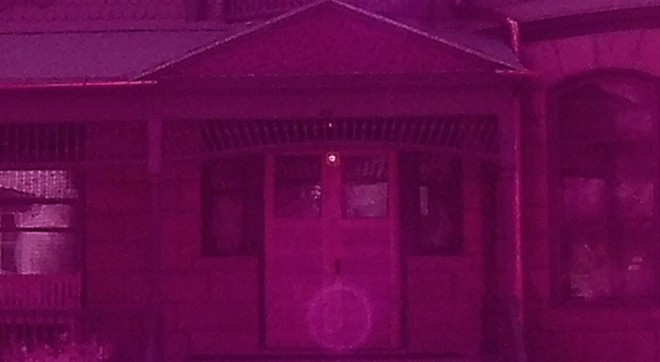 Mark Porter
Spokane Paranormal Society co-founder Mark Porter snapped this photo that appears to show a woman in the doorway of the old home once occupied by the mayor in the early 1900s in Deadwood, South Dakota.
In light of this week's cover story on ghosts and why we want to believe, we asked for your ghost stories, and you delivered. Here are a few hair-raising tales:

A VISIT IN THE NIGHT

On her way back to the car after watching a movie at NorthTown Mall, the woman sees a girl with long, dark hair in a red hoodie and Converse sneakers, standing oddly still in the parking garage.

When she glances back, the girl is gone.

This isn't so surprising. She's seen spirits since she was a child.

But then on the way home, she notices an old man standing by a mailbox, staring as her car passes. Again, she glances back. The man is gone.

"I thought something was wrong, because I usually don't see two spirits like this," says the Spokane woman, who asks that her name not be used with her story.

This is early December 2006, and about a week before, a longtime friend had called her from across the country after getting out of the military. They'd been close while growing up, but one or the other always seemed to have a boyfriend or girlfriend, and things hadn't worked out. But now, they were both single, and he'd wanted to know if she'd take a chance. She was excited, but couldn't come see him right away.

Now, arriving home, she checks her MySpace to see a message from his brother: her friend died.

Distraught, she tries calling, but no one is picking up their phone. Eventually, she falls asleep, and in the middle of the night, she's woken up and sees him standing there next to her.

"He was standing next to my bed, looking down, and he just kept saying, 'I’m so sorry, I didn't mean for this to happen. It was the road,'" she says. "He just kept repeating that."

She tells him it's okay, and stands up, then he touches her shoulder. Suddenly, she sees through his eyes.

"I saw him in the passenger seat, I saw somebody’s hands turning a steering wheel, saw it going towards a tree, and then there was a big white light," she says. "Then I was back in my room."

She tells him she loves him, and will miss him, and shortly after, he vanishes.

The next day, his brother calls her back and gives the details of the crash, which match what she'd seen the night before.

"It's heartbreaking, but I was glad that I got to see him one last time," she says.

It's about 2 in the morning, and caregiver Dave Eidy is helping an elderly woman at a care center in Spokane.

She's in a double room, with a solid wall separating the beds, but on this night, the other side is vacant, waiting for a new resident.

He turns to leave, and tells the woman he'll see her in a little bit, when a man clearly whispers from the other side of the room, "Alright, get out now."

"It was a whisper in a spooky deep voice," Eidy says. "I turned the lights back on and asked [her], 'Excuse me, what was that?'"

In her high, squeaky voice, she answered, "I didn't say anything."

In another room where he's cared for patients over the years, Eidy says he's always felt like there's a presence, almost like a camera or person watching him.

The first woman he cared for there was in the late stages of dementia and was incoherent, but would sometimes get distressed and stare above the armoire, Eidy says:

"You could tell she was looking at something."

After she passed away, Eidy says he checked in to see how the new resident was adjusting to the new space, and how she'd been sleeping.

"She said, 'Oh, fine, but there’s always this man sitting in the chair in the corner,'" Eidy says. "She said, 'He doesn't say anything, but I wish he wouldn’t sit in my room.'"

Unlike the other resident, this woman was clear-minded.

"After she was gone, a few other residents said the same thing, 'There’s a man that comes in my room and sits in that chair,'" Eidy says.

"It was back in the 1970s. I was sharing a third-floor apartment with another young woman in Hollywood, California. The house used to be a single-family dwelling but was converted to three apartments — one on each floor.

One night, when my roommate was out, my bedroom door seemed to open and I sat up in bed and thought I spoke to my roommate.

I 'saw' a floating figure and felt it sort of settle on me, then I fell back to sleep.

I thought it was a dream, until a few days later I heard my roommate tell her mother on the phone about an almost identical experience to mine.

We asked the landlord about it after that and he said the owner of the house, quite a few years back before it was converted to apartments, had hung herself from our balcony after her young daughter died. The house had been studied by paranormal investigators.

We never saw 'her' again, but about a year later, another friend who had moved in after us called and told me he had the same experience (I hadn't told him about it before). I think the house has long since been torn down for development."


FIGURE IN THE DOORWAY

"The house I grew up in, and that my mother still lives in, was constantly active. It was just part of living in the old, Gonzaga-area house. There are a variety of stories that could be told, but one of my most recent experiences was quite the wildest one I'd experienced.

In 2010, my son and I had lost our apartment after our landlord lost his house and took over the unit we lived in. We had to stay at my mother's house as we looked for a new place.

One week, my son took a trip to Seattle to visit his father and I was left alone in the creepy upstairs. I heard the usual footsteps, but being alone I was a little spooked and decided to go downstairs to have a cigarette on the back steps.

I stepped out of my bedroom and glanced over at my son's room and saw his door was open. I was going to close it, but I saw a shadow pass in front of his nightlight and cast the outline of a man on the opposite wall.

I turned on the hallway light and went down the stairs, averting my eyes from the open doorway of my son's room. I got downstairs and went through the dark house looking at the floor, afraid to look up.

I got to the back porch and opened up the back door and stepped out onto the landing of the steps and lit my cigarette. I felt uneasy. It was at that moment that the paint cans on the back porch were making loud pops, like the lids were being pressed down and popping back up.

In that moment, I forgot that I was 39 and nearly headed back in to wake my mommy.

I'd never had such activity around me and was actually scared. Instead, I returned to my room, head down like Charlie Brown, looking at the floor the whole way. I got in my room and turned on the TV.

Shortly after that, I heard a long squeal in the hallway. I muted the TV and it was quiet. Then, the squeal happened again. I recognized it as one if the pet rat's empty water bottles. It was as if the air was being squeezed out of it and the squeal is the noise of the air drawing back in through the ball bearing in the nozzle.

I left the TV on, and eventually it quieted down and I was able to fall asleep. There was nothing in the following nights, so I suppose it had had its fun."

Another perspective on opioid addiction; Spokane clinic, nursery on the move