SPORTS: The Zags are looking good, thanks in part to Zach "Snacks" Norvell, AKA the "microwave."

NEWS: Here's a rundown of all the police news you missed last week. 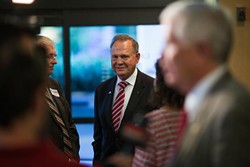 Kevin D. Liles/The New York Times
Roy Moore has earned the endorsement of Donald Trump and the Republican National Committee
Trump backs alleged child molester It wasn't an apology or even an admission of guilt that earned Roy Moore, the Alabama Senate candidate accused of child molestation, the endorsement of President Trump and the Republican National Committee once again. Moore didn't do any of that. Instead, all it took was time before they went fully on board with electing an alleged child molester to the U.S. Senate. (New York Times)

A tragic loss
Devon Tyler, the son of former Spokane NAACP president Phil Tyler, committed suicide on Nov. 28 at the age of 22. Now, Phil Tyler wants the community to have a discussion about depression and mental health. (Spokesman-Review)

Contaminated
Almost a year since Fairchild Air Force Base found out it was contaminating nearby water supply, private well owners in the area are frustrated by the lack of transparency — and the lack of clean water. (KXLY)

Tree thieves
Want to keep thieves away from your trees this winter? Spray the trees with a repellent of skunk scent, fox urine and a sticking agent, as the University of Idaho did for its trees on campus. (KREM)

THE FUZZ: SPD officer arrested for DV, a constitutionalist in Mexico and more