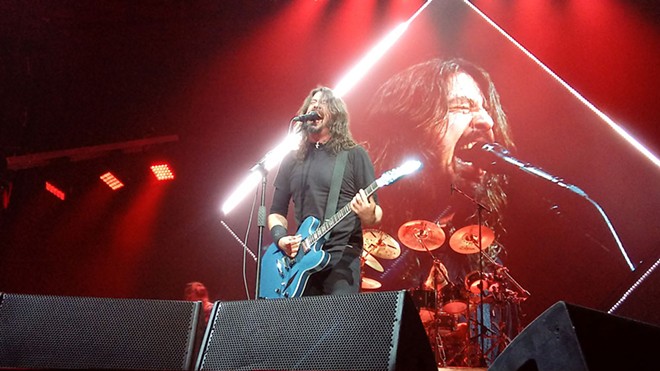 Foo Fighters leader Dave Grohl is enough of a rock 'n' roll historian to know what's needed to deliver a killer arena-rock show, and he showed that Monday at the band's packed Spokane Arena gig:

PLAY THE HITS
Twenty-two years into their career, the Foo Fighters have a ton of material, and the fans all have their favorites. As Grohl joked early on, if you'd gone to see the band 22 years ago, "we had 12 songs. We now have 367 songs." A slight exaggeration, but the band has a ton of albums, including a strong new one in Concrete and Gold. And while Grohl mentioned that the band likes to touch on each of its albums during the show, the hits were pretty much all part of the three-hour gig. "All My Life" and "Learn to Fly" came early, "This Is A Call" and "Everlong" closed down the encore, and in between the band delivered some of their biggest tunes throughout, from "My Hero" to "Times Like These," "Monkey Wrench" to "Best of You." 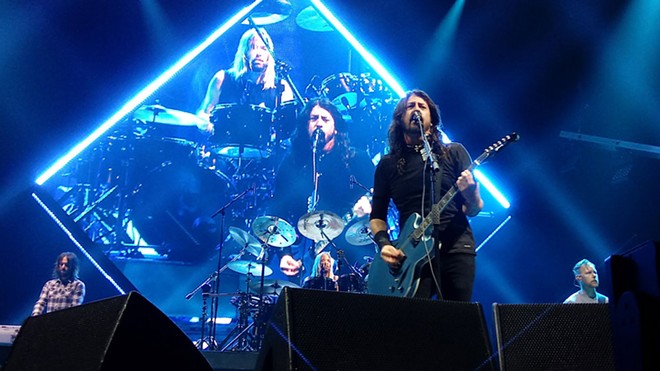 Dan Nailen
Four out of six Foo Fighters (left to right): Rami Jaffee, Taylor Hawkins, Dave Grohl and Nate Mendel.
PLAY TO EVERYONE IN THE ROOM, AND MAKE THE ROOM FEEL SMALL
Grohl chatted up the audience often, from the hardcore fans stuffed down front and holding up signs alluding to lead guitarist Chris Shiflett's sexiness, to the folks sitting in the rafters forced to look at screens for closeups of the frontman and various Foos. And he galloped all over the stage, focusing on different seat sections (and different cameras) all night. Grohl also got the audience to join forces for some communal experiences like a massive singalong or lighting up the arena with a sea of cell phones. 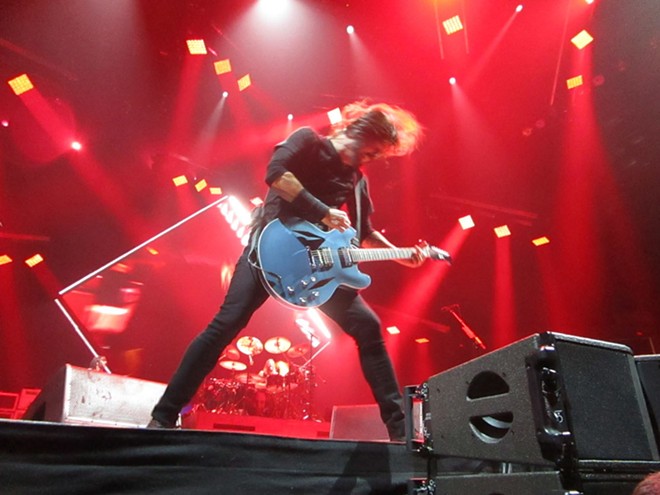 Dan Nailen
Grohl spent the majority of the Foo Fighters' show in full thrash-rock mode.
PACK A KILLER LIGHT SHOW
What appeared a simple diamond-shaped video-screen backdrop early on proved to be a pliable piece of stage magic, shifting shapes and heights and projecting all manner of objects to the audience depending on the song. Just when you thought you'd seen everything the band's special effects could do, they'd deliver something new — right up through the encore.

GIVE EVERYONE IN THE BAND PROPS
The Foo Fighters are Grohl's machine, no question about that. He's the chatty dynamo at center stage thrashing out one moment, crooning a ballad the next. But he gave his talented players plenty of spotlight, from in-show banter with Shiflett or drummer Taylor Hawkins to cover songs led by his sidemen. Shiflett delivered a fun Alice Cooper cover ("Under My Wheels") while Hawkins joined forces with opening act The Struts' lead singer Luke Spiller on winning take on the Queen/David Bowie tune "Under Pressure," with Grohl taking over the drum kit to a huge roar. Rhythm guitarist Pat Smear whipped through a spirited (if abbreviated) version of the Ramones' "Blitzkrieg Bop," while bassist Nate Mendel and keyboardist Rami Jaffee also got some time in the spotlight. 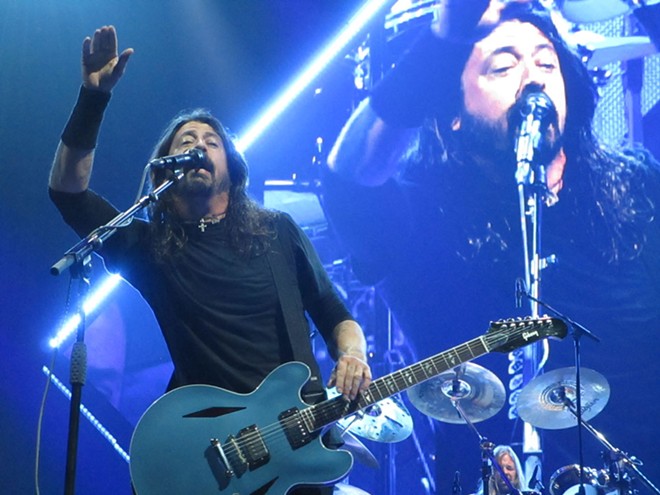 Dan Nailen
Dave Grohl worked hard to connect with the nosebleed seats. Including waves.
MAKE THAT NIGHT'S CROWD FEEL SPECIAL
Early on, Grohl talked about the last time the band played Spokane (it was 2003), or more accurately, his inability to remember it. "I don't know the last time we played in Spokane, 20 years ago?" Grohl said. "You know what that means? We have a lot of catching up to do. Is that alright?"

Judging by the cheer, indeed it was, and the three-hour show let the band deliver one to remember for a long time. That's especially true for one fan who got called up on stage after shouting requests at Grohl. Not only did the dude named Brian get the song "Big Me" sung to him directly while he sat at Grohl's feet, he got some good-natured jibes from his hero when Grohl asked incredulously, "Are you wearing sweatpants right now, motherf—-er!?!" before having the 12,000 or so on hand yell "Nice sweatpants, Brian!"

DELIVER THE NEW STUFF
The Foo Fighters' Concrete and Gold album pushes their sound beyond classic guitar-rock and Grohl's punk roots to incorporate some serious Beach Boys harmonies and '70s pop-rock moves. Three women backup singers helped deliver strong new tracks like "The Sky is a Neighborhood," the Hawkins-sung "Sunday Rain" and "Dirty Water." (The ladies really shined on an encore cover of Tom Petty and the Heartbreakers' "Breakdown"). The band kicked off the show with the Grammy-nominated howler "Run," and it set the pace for a rocking good time all around.

Here's a Spotify playlist of the setlist, and here's the complete setlist: