How an Inlander story sparked an angry argument, HR complaint against Councilwoman Stratton 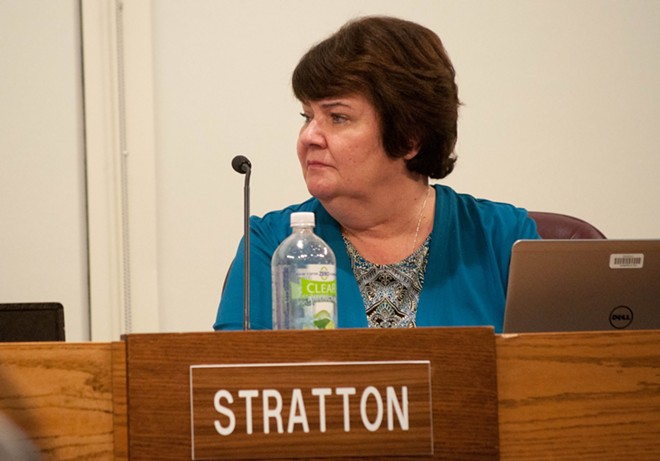 Daniel Walters photo
Karen Stratton says she has tried to avoid former M&P president David Lewis after an argument that led to an HR complaint filed against her
An Inlander article about possible appearances of conflicts of interest in City Hall sparked a tense elevator interaction and an angry parking lot confrontation between City Councilwoman Karen Stratton and former city union leader David Lewis back in January, a recently obtained Inlander records request reveals.

"On January 27th, at approximately 1:45 pm, I received a threatening statement from Councilwoman Stratton," the complaint from Lewis said. "After reflection, I consider this as an instance of bullying/harassment rather than verbal assault.”

The HR investigation cleared Stratton of any wrongdoing. Still, the damage from the argument and ensuing HR complaint nearly a year later, with Stratton saying that she now intentionally avoids Lewis.

The bulk of the story focused on the potential appearance of a conflict of interest in the fact that newly appointed HR director Chris Cavanaugh has a brother-in-law, Joe Cavanaugh, who leads Local 270, the largest union in the city of Spokane. The Inlander knew about the controversy partly because Stratton had raised the concerns in a city council meeting while explaining her vote against appointing Cavanaugh.

Stratton also mentioned Lewis's marriage to an HR analyst during her interview with the Inlander about her concerns. At the time, Lewis was president of the Managerial and Professional Association, a union that represents about 270 city employees.

The Inlander story also referenced the police chief's marriage to the then-head of internal affairs, and Stratton's marriage to Park Board president Chris Wright, and Lewis's marriage to an HR analyst.

Last year, Lewis told the Inlander, politely and warmly, that he agreed that the "public has the right to know about who works at City Hall." Shortly before the story was finished, he called and said he had chosen to step down as chair of the M&P union to avoid the appearance of a conflict.

But for Lewis, it didn't end there. While the Inlander was the only media outlet to write about the story, Lewis also says he received calls from the Spokesman-Review. According to the HR investigation, Lewis says he had to deal with resulting "unprofessional conduct from other employees at City Hall."

"Stories like that can generate a lot of internal discussion with the employees here that can create a hostile work environment for people who work here," Lewis says. "This is my livelihood."

It's particularly tricky, he says, when the stories involve a person's family.

After Stratton got wind of Lewis's frustration early this year, she says she thought that Lewis had started intentionally avoiding her. She says she'd been told Lewis was spreading the idea to employees that she was not a "friend to M&P" for "leaking" Lewis's relationship to the Inlander. Stratton didn't feel it was a leak it all — that it was all public information.

Today, Lewis says it was all a misunderstanding, that he hadn't been attempting to avoid Stratton and hadn't been badmouthing Stratton.

Still, tensions boiled over in the city elevator in January: When Lewis ran into Stratton and her husband, Stratton told Lewis she'd be sending him an email, intending to address their conflict head-on. Lewis, however, interpreted it as a sort of legal "cease and desist." He heard it as a threat.

When they ran into each other again in the parking lot, an argument broke out, as they fought about Stratton's role in the Inlander story, the impact it had on Lewis, and Stratton's own potential conflict with her husband on the Park Board. Both Lewis and Stratton were angry. Both raised their voices.

Lewis told HR that when he lamented the unprofessional conduct he and his wife had received as a result of the story, Stratton responded "good." (Stratton denies this.)

The HR investigation ultimately found that Stratton had not violated city policies — her argument with Lewis did not fit the definition of either bullying or harassment. But it also warned her that, because she can influence the city budget, she "should remain aware that her words and comments may carry more meaning to an employee than the words and comments of a colleague."

Similarly, Cavanaugh reminded Lewis that, since he'd had a role as the M&P president,
it was "not unreasonable to conclude there would be a higher level of interest by the press than there would be for other City employees."

Lewis says he doesn't want to litigate the details, that his focus is on helping homeless people and doing his job.

"I'm a low-powered grunt in the trenches. I have no desire to get into a pissing contest with elected officials," Lewis says. "I don't want to create animosity between myself and powerful , that control the city budget and could put me out of the job if they chose to."

The situation highlights an occasional downside of Stratton's frequent forays into the nitty-gritty of City Hall. Stratton, a former city clerk, has often clashed with the Condon administration, particularly over details of hiring, organizational structures executive salaries. She was one of the people raising early alarms over the mysterious transfer of police spokeswoman Monique Cotton. And most recently, her amendments to the city budget overrode administrative changes in the solid waste department.

From Stratton's perspective, she cares deeply about city employees and wants to make sure they're protected. But the clash with Lewis shows that sometimes those same efforts can frustrate, or even intimidate or anger, the workers she's trying to protect.

In an email immediately after their confrontation, Stratton complimented Lewis on his hard work, lamented their conversation had not been approached in a more "constructive" way and issued an apology.

"We both behaved very badly on Friday and I apologize," she wrote, lamenting her belief that they had "had a mutual and honest respect for each other... that no longer exists."

But after the HR investigation, she says she's tried to stay away from Lewis. Stratton says she herself felt threatened by his level of anger toward her.

"That relationship is not repaired," Stratton says. "I will do everything I can to avoid being alone in a room, an elevator or a parking lot at City Hall with him. I feel very strongly that I stay away from him."

Lewis says it's unfortunate that Stratton was left feeling this way — and wants to see what he can do to fix what was broken.

"If I can repair the relationship, that would be a great outcome... I'm about trying to build bridges," Lewis says. "I believe wholeheartedly that Karen is passionate about what she does. And I want to help her with that."

This isn't the first time Stratton's frustration with someone at the city has caused her to avoid them: In 2015, Stratton stopped meeting with the mayor for months over frustrations over how Condon had endorsed her opponent. Eventually, the two reconciled.

But this situation is different, Stratton says. Asked after Monday's city council meeting if she were willing to try to mend the relationship with Lewis, said she wasn't.

To her, a line had been crossed. The damage had been done.