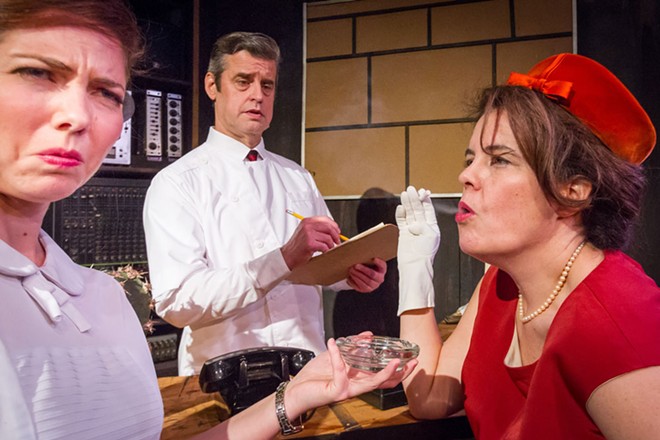 Jeff Ferguson
Cactus Flower continues its run at the Spokane Civic this weekend.
We have ample entertainment options for you in our event listings and Staff Picks, so go give 'em a whirl sometime. Or look below — some highlights of the week ahead!

FILM | You lucky ducks on the Palouse have an easy trip to enjoy the Palouse Cult Film Revival screening of Troll 2, a movie that's in close competition with The Room for the worst ever made. It's playing at the Kenworthy in Moscow. Here's a look at the glory that is Troll 2 (fun fact: there are no trolls in the movie, just goblins):

MUSIC | Three Doors Down managed to have a bunch of hits like "Kryptonite" and "When I'm Gone" well before it became known that Donald Trump was a fan. They even played his inauguration, leading to some awkward video. Now they're playing an acoustic show at Northern Quest tonight.

COMMUNITY | It's time again for the GSL Basketball Rivalry Games to take over Spokane Arena, starting tonight with LC vs. Ferris (aka Rubber Chicken), continuing Thursday with Shadle Park vs. North Central (aka Groovy Shoes) and concluding Friday with U-High vs. Central Valley (aka Stinky Sneakers).

WORDS | Head to Auntie's for a reading by Breanna Shields from her new YA book Poison's Cage.

THEATER | The Spokane Civic continues its run of the saucy Cactus Flower this weekend.

MUSIC | Hey, did you know you can still rock in America? Night Ranger knows it's true, and so will you if you check out the Bay Area classic rockers tonight at Northern Quest. I bet they'll play this one:

CLASSICAL | Looking for something completely different? The M Show: Music, Mayhem, Mystery with Mateusz Wolski is that. Join the Spokane Symphony’s ever-curious concertmaster at the Washington Cracker Co. Building for this unorthodox show featuring an ensemble of musicians performing familiar works from classical and pop music, along with smatterings of comedy and video. It also happens on Saturday.

MUSIC | It's a night of Gunderson tunes, from Noah Gunderson and Lizzy Gunderson, sharing the stage at The Bartlett. It's officially "sold out," but you might get lucky and find some last-minute tix.