Phantom Thread
Oscar nominations are out next week, which means those last few awards season stragglers are finally hitting Spokane theaters. Oh, and a bunch of movies you'll never hear about again that are getting dumped by their studios into the wastelands of January.

12 STRONG
A true story about the first Special Forces who were deployed to Afghanistan in the weeks following 9/11 and witnessed the escalation of the war in the Middle East. Chris Hemsworth, Michael Shannon and Michael Peña star. Rated R.

CALL ME BY YOUR NAME (4 stars)
It's no secret I love this movie — I put it at No. 3 on my top 10 list — and I can't wait to see it again. Timothée Chalamet stars as a 17-year-old American spending a summer at his family’s Italian villa, where he becomes infatuated with his dad’s slightly older research assistant played by Armie Hammer. Rated R.

DEN OF THIEVES
A January release starring Gerard Butler that runs 140 minutes? This oughta be good. Here he’s an LAPD officer on the trail of an elusive group of bank robbers planning to knock over the Federal Reserve. Rated R.

FOREVER MY GIRL
In what’s sure to be the best Nicholas Sparks story Nicholas Sparks didn’t actually write, a hunky country star returns to his small hometown only to discover he has a daughter with the woman he left at the altar. Rated PG.

MOM AND DAD
A young brother and sister must defend themselves from their parents when an unexplained hysteria possesses adults and drives them to murder their offspring. That Dad is here played by Nicolas Cage doesn’t bode well. Rated R.

PHANTOM THREAD
A decade after their masterpiece There Will Be Blood, Paul Thomas Anderson and Daniel Day-Lewis re-team for this romance about a prickly fashion designer falling for a much younger woman in the 1950s. As a worshipper at the altar of P.T. Anderson, I've already got my tickets. Rated R. 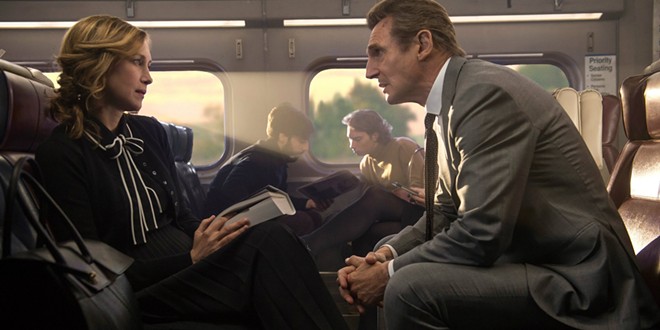 The Commuter
THE COMMUTER (2 stars)
Liam Neeson plays a former cop who swings into action-star mode when a shadowy cabal offers him a fortune to locate a mysterious object on his train ride home. As preposterous as you’d expect, but only sporadically exciting. Rated PG-13.

PROUD MARY (1 ½ stars)
Taraji P. Henson plays as an assassin-for-hire who becomes the unlikely chaperone of an orphaned boy whose father she killed. A real disappointment considering the trailer — and even the opening credits — promised the cool, retro thriller this decidedly isn't. Rated R.

Spokane's Citizen Hall of Fame nominations are open, and you're in charge