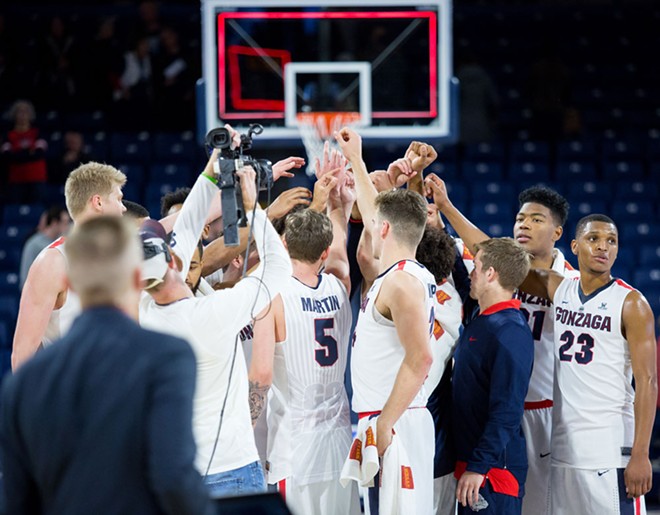 Libby Kamrowski
A road trip to Pacific and Saint Mary's this week could decided if Gonzaga wins another WCC regular season title.

Early February is usually smack dab in the middle of our slog through winter. But lately, things have felt a bit off. It’s been unseasonably warm, with the weather feeling more typical of early November or March. Inside, on the hardwood, it feels out of season as well.

January and February, when Gonzaga has to face the generally weaker competition of the West Coast Conference, are usually filled with blowout victories rather than tough tests. But right now Gonzaga is in the middle of a four-game stretch that looks much more like those they see in November and March than what they get in January or February.

It’s a welcome change, and a pivotal part of the season in which the Zags will define who they are.

“Anytime you can beat them,” head coach Mark Few said after Saturday’s win over BYU, “you know you beat a really good team.”

The Zags hadn’t beaten a good team since December. If only because they’ve faced just one or two such teams since the start of conference play. But now, with the Zags on the home stretch of the regular season, their schedule is getting a lot more brutal.

“We got through two games like that this weekend,” Few said.

Last Thursday the Zags defeated San Diego, 69-59. The Toreros have been stumbling since the start of conference play, but are a quality basketball team with one of the nation’s very best shooting percentage defenses. They held the Zags scoreless for long periods throughout the game, and even took a 40-38 lead after halftime.

Gonzaga, though, closed out strong and picked up the victory.

On Saturday it was BYU who came calling at the Kennel. The Cougars, winners of the three previous meetings in Spokane, are the only WCC team with resources on par with Gonzaga’s.

“BYU is a great program,” Few said after the game. “I have an unbelievable amount of respect for BYU, and Dave [Rose], and his program.”

Like San Diego, BYU is a defensive-minded team this season. The Cougars held Gonzaga to a season low 68 points, one less than the Zags’ previous season low of 69 set just the game before against San Diego.

While the Cougars held the Zags to their lowest point total of the season, the Zags held the Cougars’ dynamic duo of Yoeli Childs and Elijah Bryant to just 18 total points. It was their lowest combined score all season long, and a key reason behind Gonzaga’s victory.

The Zags will need to keep it up this week as they head to California for a pair of challenging road games.

First up is a date with the Pacific Tigers on Thursday. Gonzaga beat Pacific 81-48 back in late December here in Spokane, but the Tigers have gotten better since. They’re currently tied for third place with BYU in the WCC standings.

But the biggest game of the year is the one on Saturday when Gonzaga visits Saint Mary’s. These teams’ first meeting of the year, a 74-71 Saint Mary’s victory in Spokane on January 18, was an absolutely thrilling contest. It was also Gonzaga’s only loss in conference play.

Which means the Gaels, who sit at 23-2 on the year and a perfect 12-0 in conference play, are alone atop the WCC standings. The Zags likely need to win in Moraga if they want a shot at a sixth straight regular season championship.

Saint Mary’s was picked to win the WCC in the preseason, and currently ranks higher in the AP Poll. So, it could be a disappointing week for Gonzaga fans. Personally, I prefer exciting games against good teams over a string of blowouts, especially this time of year. Win or lose, they’re like a warm sunny day thrown into the cold monotony of early February.