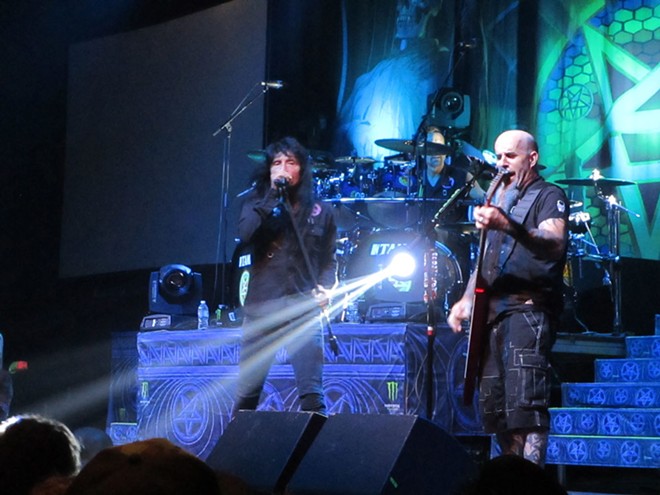 At one point during Anthrax's headlining set Saturday at the Knitting Factory, I found myself marveling at how these dudes — mostly in their 50s — were able to deliver such a pummeling, physical show.

They then promptly ended the gig after about 70 minutes and 11 songs, and you'll hear no complaints from me considering those 70 minutes were filled with some of the favorite songs of my childhood, and some new tunes that hold up easily to the thrash-metal pioneers' older material.

Hitting the stage after sets by Killswitch Engage and Havok, Anthrax promptly had the floor erupting in a swirl of mosh-pit insanity, bodies flying toward the security guards lining the front of the stage as the band tore into "Among the Living" and "Caught in a Mosh."

That's one hell of a one-two punch to launch a show, and the band didn't let up from that point forward. 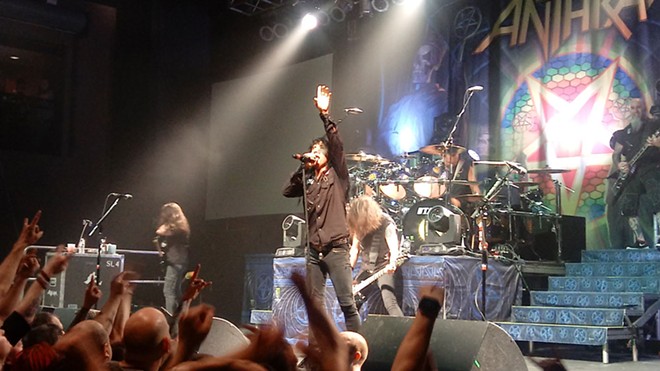 Dan Nailen
Anthrax had the crowd in a frenzy throughout its 70-minute set.

Singer Joey Belladonna prowled the stage side to side, exhorting the fans to sing along to some old favorites like their cover of Joe Jackson's "Got the Time" or "Madhouse." Bassist Frank Bello is always a blast to watch, his instrument slung so low it almost bounces off his shoe tops. The two guitarists, the goateed and bald Scott Ian and the young Jon Donais (he of the flowing locks and fleet fingers), delivered the rapid-fire riffs and searing solos that made the metal fans raise their devil horns early and often.

Mid-show, Anthrax delivered two songs from their most recent albums, and both, "Fight 'Em 'Til You Can't" from 2011's Worship Music and the epic "Breathing Lightning" from 2016's For All Kings, proved thrilling additions to their old tunes. There's still plenty of life in these old thrashers.

After Ian exhorted the crowd to check out For All Kings, "or at least listen to it for free tomorrow," Anthrax headed back into the familiar terrain that had the crowd packing the Knit to the rafters and going nuts. "Medusa," "I Am the Law" and "Be All, End All" all killed, as did "Antisocial." 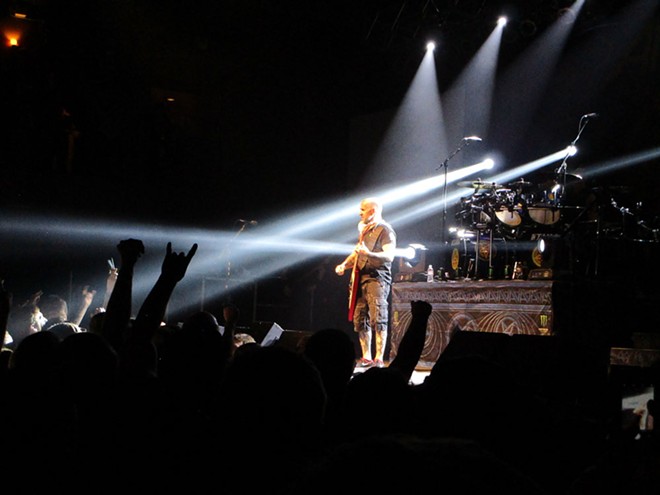 The show-closing "Indians" is a fine tune, too, and a worthy one to end the show on, but seeing Belladonna put on a toy headdress to perform it as he did when it first came out in the '80s seems a little tone deaf to the times, especially considering the tune's pro-Native American message.

That's a small complaint from an overwhelmingly entertaining show, but one that lingers since it was the last song of the night. There was no encore on Saturday—perhaps the only nod to the band members' advanced years.