NEWS: A new mother quit her Spokane County job after struggling to find a place to pump breast milk.

Arrested for a cause
Three people were arrested outside of U.S. Rep. Cathy McMorris Rodgers' (R - Spokane) office yesterday. The people were protesting President Donald Trump's immigration policy and advocating for the passage of a clean Dream Act. They were arrested after they refused to leave her office. (Spokesman-Review)

Spokane restricts Live PD
The Spokane City Council has put restrictions on reality shows like COPS and Live PD, requiring that they get permission from alleged criminals before appearing on TV. (KXLY) 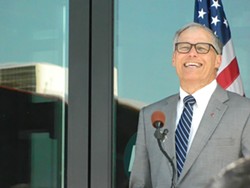 Could it be?
South Korea says North Korea is willing to abandon its nuclear weapons, giving the U.S. cautious optimism about defusing the confrontation. (New York Times)

This time he's gone too far
House Speaker Paul Ryan and other conservatives are worried about Trump's plan to raise tariffs on aluminum and steel coming to the U.S. "We are extremely worried about the consequences of a trade war and are urging the White House to not advance with this plan," says Ryan's spokeswoman. (CNN)