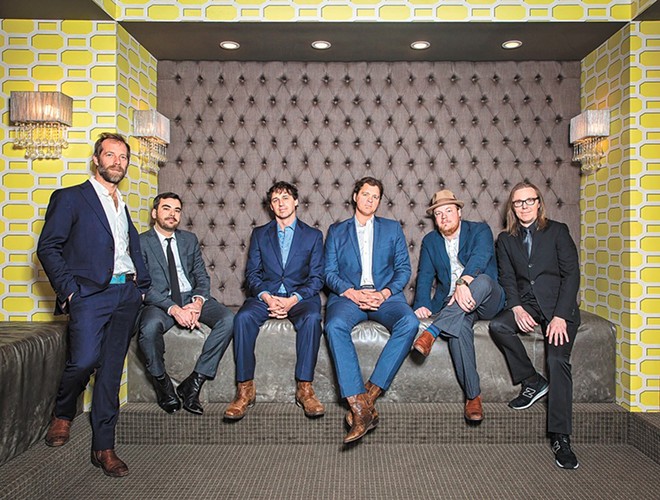 A collaboration between a symphony orchestra and musicians from more pop-oriented genres isn't necessarily a slam dunk every time.

Sometimes the symphony dominates and the featured performer shrinks in the music. Other times the symphonic versions of pop tunes leave you wanting more of the original feel, and less of the lush grandeur that comes with a full orchestra.

The Steep Canyon Rangers' appearance Saturday with the Spokane Symphony hit the sweet spot pretty well. You can attribute that to a couple of things: The band has worked seriously on creating symphonic arrangements for their songs for a few years now, and their songs are already pretty pliable things — a blend of bluegrass, country, blues and folk that naturally lend themselves to expansion and experimentation.

Saturday night, the Rangers' main songwriter and banjo player Graham Sharp told the audience before the show even began that if they were so inspired to hoot and holler, they shouldn't let the formal confines of the Fox Theater or the presence of the symphony deter them. The band wanted to hold on to a little of their hootenanny roots, and they did just that with a set list that leaned heavily on their new album, Out in the Open.

The showed opened with the title track of the band's 2015 album, RADIO, and I was briefly worried the symphony's power would overwhelm the acoustic crew, but by the follow-up "Blow Me Away" the sound between the sextet and the symphony was better balanced.

Surprisingly, the Rangers have arrangements for tunes from their new album ready to go, and they hit the new album hard early on with "When She Was Mine," "Can't Get Home" and "Roadside Anthems."

Sharp and guitarist Woody Platt took turns on lead vocals, and the hyperactive Nicky Sanders was a joy to watch as he bounded around the stage ripping into his fiddle parts. It was particularly fun to spy members of the symphony watching Sanders and smiling at his energy.

"We played here two times before, with Steve Martin," Platt announced early on, recognizing the band's past visits to the Fox and long-running collaboration with the comedian that earned them a slew of new fans.

"We are so happy to be rid of that deadweight," Platt deadpanned. "Don't tell him we said that."

While the band delivered their songs, the symphony's presence was felt in both dramatic and subtle ways. The tinge of horns on "Blow Me Away" and soft strings on "When She Was Mine" both added nice textures to the Rangers' tunes.

On an instrumental led by mandolin player Mike Guggino, the symphony went from complete silence to joining in on a powerful passage that ended up being one of the show's highlights.

While the symphony sat out a couple tunes so the Rangers could just do their thing, the band also returned the favor at the start of the second set when, on "Call the Captain," the band completely left the stage to the symphony for a bit.

The second set featured solid takes on "Let Me Out of This Town," the Sharp-sung "Las Vegas" and new "Farmers and Pharaohs," and the Rangers and symphony fit better and better throughout. "Old 97s Gonna Make it This Time" and "Going Midwest" offered more highlights on a night when the line between uptown and down-home music was blurred to beautiful effect.