When a hate group put up posters in downtown Spokane, residents quickly tore them down

Daniel Walters photo
The remnants of a torn poster for the white supremacist group Identity Evropa lingers on a light pole in downtown Spokane Sunday.
Lately, Stephen Purdue, a freshman undergrad studying biophysics and pre-med at Whitworth University, has been paying attention to reporting on white supremacy.

"I was trying, to the best of my ability, trying to follow the hate groups in the area," Purdue says. "Because — on or off the record — f—- that shit." 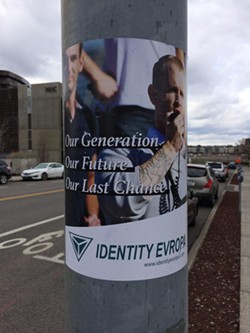 Stephen Purdue photo
Similar Identity Evropa posters have been posted at local college campuses.
So on Sunday afternoon, when he drove home from work to the San Marco apartments, several posters stuck to nearby light poles caught his eye. The name, Identity Evropa, sounded familiar. And when he looked it up on his phone, he confirmed it.

Identity Evropa is a white nationalist group, according to the Anti-Defamation League. Remember the alt-right marchers in Charlottesville chanting: "You. Will not. Replace us"?

It is unknown who put the posters up downtown on Sunday, but Identity Evropa hasn't exactly been shy about making fliers and banners a major part of their strategy, particularly on college campuses.

Last month, EWU held a rally in response to Identity Evropa posters on their campus.

The tactics have surged ever since the rise of Trump as a presidential candidate, according to the ADL. This January, the ADL counted at least 346 incidents of explicit white supremacist propaganda on campus, and that isn't even counting the WSU fliers with the trolling slogan, "It's okay to be white."

Eleven were in the state of Washington.

Stephen Purdue photo
This poster, on Riverside near Monroe, was quickly torn down after being photographed by Whitworth student Stephen Purdue.
"To actually see one of their posters in my neighborhood, that set off my anger," Purdue says.  "I don’t really have any tolerance for intolerance. It’s an established neo-Nazi group. I think that’s just not okay."

He tore the two posters down that he spotted before heading up to his apartment. A few hours later, he came outside and spotted more posters in the area, including some near the Spokane Club at the intersection of Riverside and Monroe. He tore those down too.

In all, he says, he ripped down seven posters.

And he wasn't the only one.

In Sandpoint, Idaho, in January of this year, police confronted a man accused of distributing a different series of hateful fliers and CDs at Sandpoint High School. He denied distributing but was banned from Lake Pend Oreille School District property for more than a year.

The First Amendment, however, protects hate speech. The police did charge the Athol white supremacists, but only for littering. Those charges were dropped, because, other than their racist content, they weren't any different from any other campaign literature.

This group, by contrast to Identity Evropa, is pro-immigrant.

"A border is not a wall," one CrimethInc sticker downtown reads. "It's a system of control." 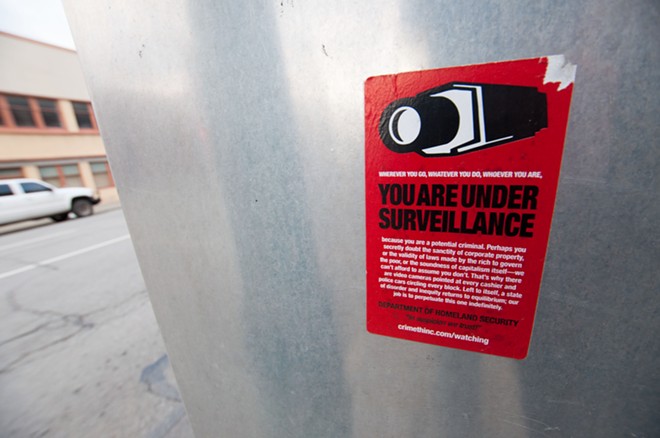