Gage Skidmore
Conservative pundit Ben Shapiro argues that the connectivity and anonymity the internet provides — combined with a backlash against identity politics — has resulted in some college students being drawn to the "alt-right."
Conservative pundit Ben Shapiro — the sharp-tongued, fast-talking, former Breitbart News editor-in-chief — had already published his first book, Brainwashed: How Universities Indoctrinate America's before he turned 21.

Today, Shapiro is 33 and has the most listened-to podcast in the country.
But while a lot of what Shapiro has written has taken aim at what he sees as the excesses of the campus left, the Inlander wanted to explore Shapiro's take on the campus right.

In other words, how has the right on campus changed since his undergraduate days at UCLA?

But Shapiro has also noticed the rise of a small group of students whose fights with the left have morphed into a different sort of ideology.

"One thing that is sort of unfortunate, is there are certain right-wingers on campus that have become more reactionary than conservative," Shapiro says. "Reactionary means just 'enjoying drinking leftist tears.'  Conservative means actually promulgating a conservative agenda. Actually pushing smaller government and individual rights and that sort of thing."

He says he is seeing a of "alt-right" students on campus, though he stresses that it remains a very small minority on college campuses.

"It's mostly kids who are reactionary and driven the idea that, if it pisses off the left, it must be good," Shapiro says. "It's and it's jovial."

We spoke with Shapiro for this week's cover story about the campus culture wars on the Washington State University campus. Much of the tension and conflict at WSU has been driven by James Allsup, the former WSU College Republicans president-turned-"alt-right" social media star. Allsup's planned speaking role at the Charlottesville, Virginia, "Unite the Right" — watch the video he took of the march here and draw your own conclusions — resulted in calls for him and the College Republicans to be punished.

Shapiro says that much of the aggressiveness of the campus right has been driven by the "increasing insanity of the left," including violent protests on campus, attempts to shut down speakers, and the notion that anyone with "white privilege" can't be a part of the debate.

The goal sometimes seems more about getting a rise out of liberals on campus than actually doing anything good for the movement, he says.

“There are some people on campus who are more interested in bringing in speakers who are provocateurs, just so they can watch, so they can 'trigger' leftists, than they are with ‘How many people am I actually convincing?" he says. "Is this starting a discussion? this pushing good ideas?”

In particular, he's thinking of his former Breitbart colleague, asshole provocateur Milo Yiannopoulos.  The Anti-Defamation League identified Shapiro as one of the journalists most harassed by anti-Semitic tweets during the 2016 campaign, and one of Shapiro's biggest harassers was Yiannopoulos.

Yiannopoulos greeted the birth of Shapiro's son with a racist joke. Yiannopoulos hired dwarves at his book party to wear yarmulkes, name tags labeled "Ben Shapiro" and bibs saying "It's my bris, I can cry if I want to."

You don't win the argument, Shapiro suggests, by simply generating outrage from people who are purely intentionally outrageous.

“If you want to make a point that the left is crazy, don’t invite a garbage human to piss off the left,” Shapiro says. "Invite somebody who is not a garbage human and says reasonable things, and the left still goes nuts."

Shapiro, too, has been subject of massive protests.

"They had to deploy 500 police officers for me to speak at Berkeley," Shapiro says. "And I gave a speech that — if you actually listen to the speech — it's hard to get more consensus conservative than the speech I gave."

Shapiro stresses that many of the more aggressive protestors aren't students, but also says he has seen a shift in how students on the left are greeting controversial speeches.

"'Diversity is our strength' is Orwellian claptrap coming from people who can't handle a memo that says women and men are different," Shapiro wrote last month on Twitter.

But a key distinction between Shapiro and students like Allsup is the ideology underpinning their controversial statements.

“That opposition [to the ideas of the left] bifurcates a little bit," Shapiro says. "There’s an opposition that says, all this stuff is bad, and the only way to fight is to fight it with conservative ideas of individualism. And then there’s this group of people that say, “Well, if they’re going to f—- with us, we’re going to f—- with them. Let's just do stuff that screws with their heads.”

Trump, for example, was elected by intentionally stoking the culture wars, despite having a record wildly different from traditional conservative ideology.

“He’s been more polarizing, obviously,” Shapiro says about Trump. “He’s been used as a flashpoint for a lot of people. Because he’s patted the alt-right on the head. Because he says idiotic things on a regular basis.”

Shapiro says that social media also provides a crucial role in the growth of the "alt-right" because it provides two things: anonymity and connectivity. In person, it's hard to find someone who will say they believe that whites are the superior race, but on anonymous message boards like Reddit and 4chan, entire communities of white supremacists are just a Google search away.

Shapiro remembers speaking at a dinner in California, where a student in a "Make America Great Again" hat turned to Shapiro — an Orthodox Jew — and said "another Shoah," referencing an "alt-right" anti-Semitic meme making fun of Jews who reference the Holocaust.

"I looked at him like, 'What the hell just happened here? What did you just say?'" Shapiro recalls. "I don't even think he knew what he was saying. I think he just thought it was funny in the circles where he ran, so it wasn't a problem."

Some right-leaning students, Shapiro says, start out with Pepe and Harambe memes online, politically incorrect jokes and images that don't have anything directly to do with white supremacy. But for some, he says, that's a gateway drug.

"They're on the message boards and, 'Well, everybody here is talking about racial IQ. That's interesting. Nobody wants to talk about that on the left. They refuse to talk about racial IQ, so that must have some merit to it,'" he says. "And then it turns into, 'Well, the reason they won't talk about it is because they're cucks, and because they're promulgating this identity politics of their groups, so why shouldn't we have an identity politics of white people?'"

Allsup lamented to the Inlander that not enough has been done to study IQ differences between the races, and argued that "anthropological research" couldn't possibly be racist.

Allsup has attacked Shapiro more than once on Twitter, often to defend the "alt-right." He lambasted Shapiro for leaving his position as Breitbart News editor-in-chief because the publication refused to stand up for writer Michelle Fields after she was grabbed by Trump campaign manager Corey Lewandowski in March 2016.

Allsup called Fields' claims of being grabbed by Lewandowski "false," though audio and video footage both backed up Fields' claim.

"What has 'constitutional conservatism' actually conserved?" Allsup wrote in another tweet to Shapiro. "The borders and American culture- both lost under "conservative" watch!"

In another tweet, Allsup rose to the defense of white nationalist Richard Spencer.

"Ah, Ben, there you go again," Allsup writes, "@RichardBSpencer isn't a Nazi. You should have him on your show and debate him!"

And in a tweet in May 2016, as Trump was racking up more and more delegates, the WSU College Republicans president proclaimed to Shapiro that the "alt-right" were "college educated, professionals" just like Allsup. 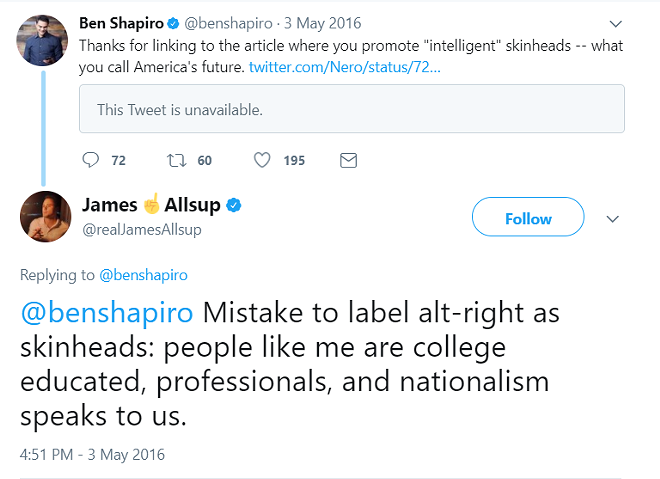