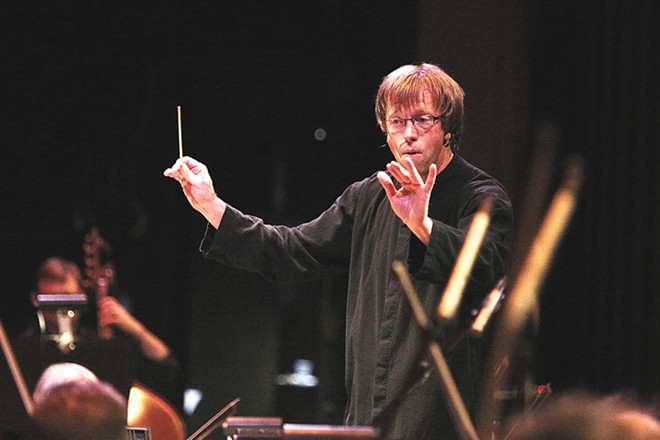 The concert schedule for the Spokane Symphony's 73rd season — the final for music director Eckart Preu — was announced today.

The 2018-'19 season includes 10 classics concerts and six pop concerts, as well as several special events. Preu is scheduled to conduct five of the classics concerts (Nos. 1, 3, 4, 5 and 10). Each of the five finalists to take his place will conduct the others.

Concert tickets go on sale Aug. 17 to the general public, but subscribers to the Spokane Symphony packages can purchase them now.

Elizabeth Pitcairn, owner of the 1720 Red Mendelssohn Stradivarius violin, or the Red Violin, will be guest performing.

6. Passion's Pursuit, Feb. 16 and 17, featuring Zhou Tian's Rise, Franz Liszt's Hungarian Rhaspody No. 2 and Concerto No. 2 in A Major and Brahms Symphony No. 4.

Cellist and guest soloist István Várdai will play Prokofiev's Symphony Concerto, which was at one time considered "unplayable," according to a news release from the Spokane Symphony.
10. Eckart's Farewell, May 4 and 5, featuring Joseph Boulogne's Overture to L'amant anonyme, Nebojša Jovan Živković's Concerto of the Mad Queen and Richard Strauss' Apline Symphony.

The Pops concerts feature performances by ABBA The Concert, Michael Cavanaugh in "The Music of Billy Joel," and Pink Martini, with backing from the Spokane Symphony.

Special concerts this season include Haunted Hallows: The Music of Harry Potter, The Nutcracker Ballet and Beethoven's Ninth on New Year's Eve.

And the Fox Family Series is back for a second year with Recycled Percussion (featuring instruments made from almost anything), Crique Zuma Zuma (featuring aerial acts, Egyptian limbo dances South African gumboot dances and more) and That Physics Show.

When a hate group put up posters in downtown Spokane, residents quickly tore them down