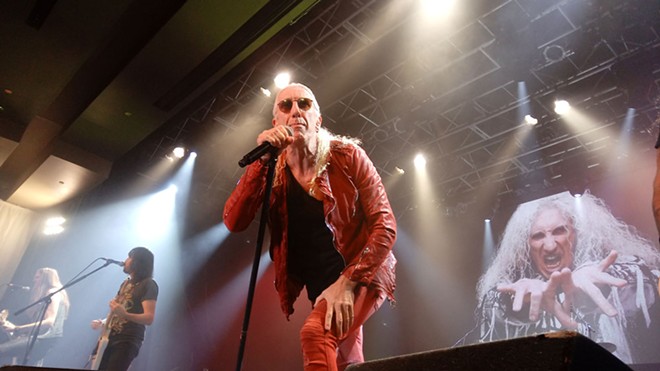 Saturday night at Northern Quest Resort & Casino, I got educated by Dee Snider, the man most of us know for his years as frontman for pioneering glam-rockers, Twisted Sister. It was a lesson I was happy to get, and a reminder of a similar experience a while back.

Several years ago, after years of ignoring and/or dismissing Alice Cooper, I went and saw the man in concert. And that was all it took to understand that I had been missing out, that Cooper had the songs to match the showmanship. Snider emphatically reiterated that point Saturday — that before you dismiss one of these "classic" acts for being merely a remnant of some long-ago pop culture moment, go see them in concert.

Like the case with Cooper, I was always more of a casual observer of Snider's music than a fan. I grew up in MTV's heyday when Twisted Sister's mainstream breakthrough came courtesy of cartoonish videos for "We're Not Gonna Take It" and "I Wanna Rock."

Dan Nailen
The leather jacket didn't last more than a couple songs before Snider ditched it.

At Saturday's show, Snider proved that his music is worth more serious consideration than being relegated to the dustbin of '80s nostalgia. The 63-year-old looked and sounded great, and even without the makeup and crazy stage clothes of Twisted Sister's MTV years, he was fun to watch commanding the stage. And the songs were powerful, straightforward hard-rock tunes impossible not to get swept up in.

The set list leaned heavy on Twisted Sister, of course, and hearing them live gave me new appreciation for both the big hits and the deeper cuts he played.

Snider opened the show, though, with a new song called "American Made," from his upcoming For the Love of Metal album. The crowd was on its feet from the start, and Snider rewarded them with a couple of older Twisted Sister cuts right after the new tune; both "The Kids Are Back" and "You Can't Stop Rock 'n' Roll" had the audience pumping their fists and singing along.

Snider paid tribute to some of his own musical heroes via covers of Led Zeppelin's "Heartbreaker" and a mash-up of Zeppelin's "Rock 'n' Roll" and old chestnut "Real Wild One (Wild Child)," famously covered by Iggy Pop.

Dan Nailen
"Oh, you DON'T wanna rock? The exit is that way."

Snider talked often between songs — no surprise to anyone familiar with the man — and talked about using "We're Not Gonna Take It" to help raise money to fight childhood cancer. After doing the song ballad-style for a while, Snider and his band kicked into the rocking version you still hear on the radio, the video screens showing images of Snider, John Denver and Frank Zappa as they all testified in Congress against efforts to censor rock music. In introducing "The Price," he talked about his musical peers who'd died the last few years, and images of folks like Prince, Tom Petty and David Bowie flashed on the screen over his head.

It was a nice way to showcase the modern rock era, while Snider's performance was an emphatic reminder of his own significant place in it.