REVIEW: Dirty Dancing charms on stage just as it did on movie screens 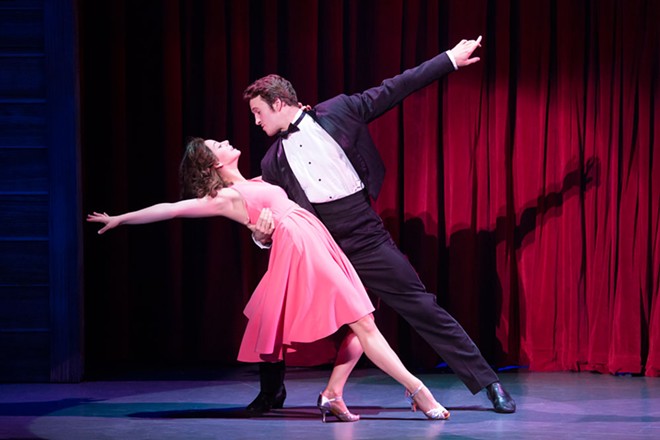 With every film-to-stage adaption, it’s fun to guess how certain beloved scenes will play out live in front of an audience and whether that version will do the film justice. With Dirty Dancing: The Classic Story on Stage, as with the film, we dive in the summer of 1963 and find “Baby,” played by Kaleigh Courts, packing up for the family camp that plays a monumental role in her coming-of-age story.

It’s clear throughout that Courts is a trained dancer, but it was impressive to see her feign being an awkward dancer in the beginning, arms and legs flailing about before her training with Johnny, played by Aaron Patrick Craven. It was satisfying to see her progression from dance rookie to sultry-moves wizard. Craven plays Johnny a tad more harsh and cold in demeanor than Patrick Swayze's film version in the film, but in the end, the audience seems as won over with him as Baby is. What he initially lacks in attention to Baby, he makes up for with attention to every detailed move, spin and piece of footwork. Craven takes complex moves and makes them look too easy, the telling sign of a talented dancer.

Several times Erica Philpot, who plays Elizabeth, a singer, steals the show with her captivating vocals and range, whether performing a solo number or accompanied by other vocalists. Anaïs Blake plays Penny, the professional dancer who Baby steps in for, and dazzles with her routines and variety of bold costumes.

Every scene seamlessly transitioned into the other with the help of a convincing mountainous stage set and props. The cast broke into the usual expected dance numbers accompanied by iconic songs from the film like "Hungry Eyes" and "Hey! Baby!" The orchestra, conducted by Jonathon Marro, provided the perfect accompaniment and sets the appropriate tone throughout.

Another treat for the audience was the inclusion of several songs, like “Save the Last Dance For Me” by the Drifters and “Stubborn Kind of Fellow” by Marvin Gaye, that were added into the musical that were originally intended for the film, but didn’t make it. And, of course, there were the long-awaited moments that delighted fans of the movie, like when Johnny storms back in to the room to say “Nobody puts Baby in a corner,” or the perfected lift in the end when Johnny holds up Baby in their big performance. Both iconic scenes were met with roars and cheers from the audience.

At one point one of the characters, Robbie, quotes The Fountainhead to Baby: "Some people count, some people don’t.”

To me, it rang as an ironic statement in a play where every character was vital to the storyline and every actor contributed to its success. In Dirty Dancing, the stage version, everybody counted, and most in the audience likely left the INB charmed by their effort.

Dirty Dancing: The Classic Story on Stage runs through Sunday at the INB. Visit the INB website for showtimes and tickets.