How has McMorris Rodgers' Christian faith influenced her response to Trump? 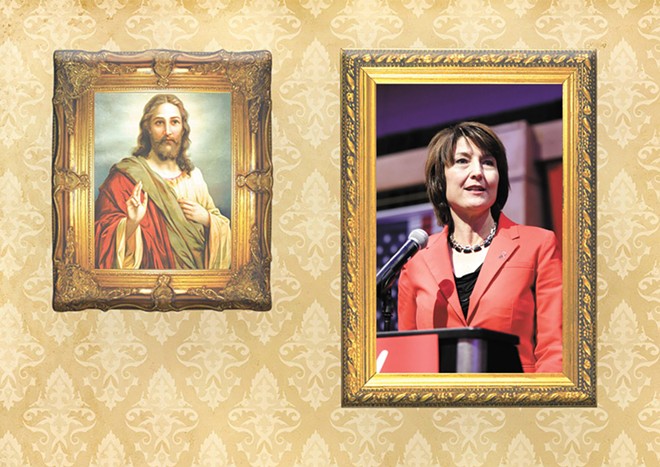 Last week, Attorney General Jeff Sessions decided to defend the Trump administration's family separation policy that has led at least 2,000 immigrant children to be separated from their parents, many of them held in cages, by citing scripture.

“I would cite you to the Apostle Paul and his clear and wise command in Romans 13, to obey the laws of the government because God has ordained them for the purpose of order,” he said.

But many others pointed out that it seemed wildly contrary to the orthodox Christian reading of the Bible. After all, according to the Bible, Jesus had explicitly condemned leaders who obsessed about the fine details of the law and neglected mercy and compassion. Some pointed to verses about commands to help the foreigners, strangers and children. Others noted the historical context: Romans 13 had been used to justify all matter of evil, including slavery.

Heck, Hillary Clinton weighed in: "Those who selectively use the Bible to justify this cruelty are ignoring a central tenet of Christianity," Clinton said. "[Jesus] did not say, 'Let the children suffer.'”

And yet, white evangelicals support Trump in insanely high numbers. Tom Brenner/The New York Times
President Donald Trump speaks during a meeting of the National Space Council in the East Room of the White House, in Washington, June 18, 2018. At the event, Trump remained resistant Monday in the face of growing public outcry over his administration’s policy of separating children from their parents at the border, repeating the false assertion that Democrats were the ones to blame for it, and suggesting that criminals — not parents — were toting juveniles to the U.S.
In fact, white Evangelical Christians are one group that has been much quieter to object to the family separation policy.

Which brings us to Rep. Cathy McMorris Rodgers. McMorris Rodgers attended Pensacola Christian College, a very conservative then-unaccredited independent Baptist college. ("We reject the man-made theory of evolution occurring over millions of years and believe that the earth is approximately 6,000 years old," the Pensacola states in its articles of faith.)

And McMorris Rodgers has been happy to discuss her own faith:

“God leads one step of it at a time," she told the Christian Broadcasting Network in 2014. "He prepares and he equips you for what's next."

And this month, in a speech before the Evangelical conservative Faith and Freedom Coalition, McMorris Rodgers stressed the Republican Party's accomplishments and offered up a prayer.

"I pray every day that God’s purpose in my life will be deeply rooted in my heart," she said. "And I pray that I will operate in the spirit of power and love, and a sound mind because God’s spirit is within me."

In an interview with Cathy McMorris Rodgers last month, after discussing her belief that she "had no reason to disbelieve" the women accusing the Trump of sexual assault and sexual harassment, we asked her what scriptures, if any, she turns to when deciding how to respond to Trump in that context.

"Well, I am a Christian. And I believe that I will have to give an account to God as to how I live my life and to how I treat my fellow man," McMorris Rodgers says. "I live my life to be an example to the best of my ability."

When asked about how scripture informed her response to Donald Trump in general, she initially praised Trump's record defending her faith.

"President Trump has defended Christianity. He has defended religious freedom more than any other president," McMorris Rodgers says. "He made the decision to move the embassy to Jerusalem."

That last one may seem an odd one — what does an embassy location have to do with Christianity? But the location of the embassy in Jerusalem is a big deal for a certain section of Christians, particularly those who believe Israel plays an important role in end-times prophecies.

"He's made decisions that I support. All of us have to give an account for ourselves personally. I work and live around a lot of people who I don't agree that their personal decisions," McMorris Rodgers says. "I have made a determination that I will work with President Trump when I can, and I will also take a stand when I don't agree."

So has McMorris Rodgers taken a stand against family separation?

McMorris Rodgers has said she's opposed to the practice.

“I have said we should not be separating families,” she said in a town hall in Pullman, according to the Washington Post.

So it's not accurate, to be clear, to say that she's been silent on this issue.
Similarly, a House Republican immigration bill supported by leadership wouldn’t explicitly ban the practice of family separation — but it would allow children to be held in ICE detention indefinitely with their parents.

Yet in terms of public statements, McMorris Rodgers — despite stressing her position as a mother in discussing everything from marijuana to school shootings — hasn't exactly been publicly sounding the alarm over the issue.

In the past month, Cathy McMorris Rodgers has posted or reposted tweets praising elements of the Republican’s tax reform bill over 50 times. She did not appear to mention the controversy over family separation once during that time.

She did, however, tweet a happy birthday message to Donald Trump.

Contrast McMorris Rodgers' muted opposition to family separation with former First Lady Laura Bush recent column which said: "I live in a border state. I appreciate the need to enforce and protect our international boundaries, but this zero-tolerance policy is cruel. It is immoral. And it breaks my heart."

Or with conservative Catholic columnist Ross Douthat calls it the "wickedest thing the Trump administration has done so far."

Or with Republican Sen. Ben Sasse: Family separation is wicked. It is harmful to kids and absolutely should NOT be the default U.S. policy."

Franklin Graham, an evangelical leader generally beloved on the far right, condemned it as well: "It’s disgraceful, and it’s terrible to see families ripped apart and I don’t support that one bit."

So did Bill O'Reilly, who said on Twitter, "the government should know how bad this looks and how innocent children are actually suffering."

Heck, even the Mooch got in on it: "You can’t simultaneously argue that family separation isn’t happening, that it’s being used as a deterrent, that the Bible justifies it and that it’s @TheDemocrats fault. @POTUS is not being served well by his advisors on this issue. "

It's not that McMorris Rodgers doesn't care about immigration. Even some of her critics believe that she, for example, does care about DACA students. But her position has generally been that working behind the scenes with leadership, as opposed to taking a dramatic stand, is the most effective for getting things done in the age of Donald Trump.

McMorris Rodgers was part of a successful leadership effort to tamp down a House petition to force leadership to allow a vote on protections for DACA recipients.

Instead, this week, House members will vote on an immigration bill that represents a compromise between the right wing and moderate wing of the Republican party: It provides a pathway to citizenship for DACA students, allocates $25 billion for the border wall that Trump promised Mexico would pay for and ends the visa lottery program.

UPDATE: Shortly after publication of this post, McMorris Rodgers did issue a critical statement of family separation. Here it is in its entirety:


“First, I do not believe the government should separate children from parents who are awaiting adjudication for breaking federal immigration law. As Americans, the land of freedom and opportunity, as a people who are warriors for human rights and human dignity, these policies are inconsistent with our nation’s values and everything we stand for.

“I believe that the administration should stop the practice of separating families on their own. However, President Trump has made it clear that Congress must make a formal policy change. Congress can and should fix this by passing a law that clarifies separation shouldn’t happen when families are apprehended illegally crossing the border. That is what I am working with my colleagues in the House right now to do.

“Again, I don’t believe in tearing families apart, but I also believe that people need to be coming to America legally, which is why I support increased border security efforts so families aren’t put in this situation. The new Goodlatte bill that I helped negotiate, the Border Security and Immigration Reform Act, will fix this family separation problem and authorize funding for construction of the border wall, close enforcement loopholes, end catch and release, reform the legal immigration system, create a merit-based visa program, and provide the DACA population a bridge to the legal immigration system and earn legal status in our country.”