NEWS: On Sunday night, WSU football coach Mike Leach tweeted a fake Obama video obviously doctored to make it look like he said something he didn't. When called out on it, he dismissed that it might be fake and said he wanted to start a "discussion." Finally, yesterday, he admitted the video was "incomplete."

FOR FUN!: A man with Spokane connections appeared on Jeopardy! last week. Not to be outdone, his brother will appear on Guy Fieri's Diners, Drive-ins Dives.

NEWS: Congresswoman Cathy McMorris Rodgers is a Christian. So how does that square with Trump's policy on separating children and parents at the border?

Listen to the children
When 10 Central American children are wailing after being separated from their parents, one Border Patrol agent jokes, "Well, we have an orchestra here." Listen to the audio of the children's cries here. () 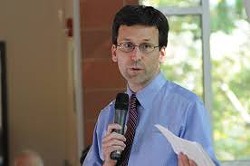 Gov. Jay Inslee and state Attorney General Bob Ferguson wrote President Trump a letter condemning the administration's policy of separating families at the border, saying the policy was inflicting "intentional, gratuitous and permanent trauma" on children and parents. Trump has remained defiant in the face of the criticism. (Spokesman-Review/New York Times)

Tariffs fired
Trump has told the U.S. Trade Representative to prepare new tariffs on $200 billion in Chinese imports. The move is sure to move the two countries that much closer to a trade war. (Associated Press)

Ring, ring...
Spokane Valley, getting less money than it thought from a telephone tax, has to dip into reserve funds to pay for street repairs. (Spokesman-Review)

How has McMorris Rodgers' Christian faith influenced her response to Trump?

As the Spokane Police Guild negotiates a new contract, the police ombudsman is feeling the union push back