One brother on Jeopardy!, the other to appear on Guy Fieri's Diners, Drive-Ins and Dives 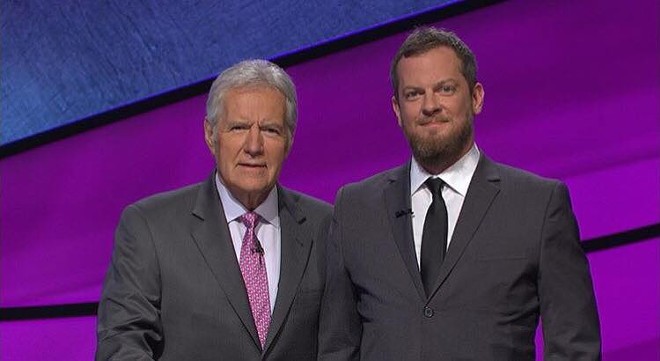 t was quite a week for the Brown brothers. On Friday, Jon Brown appeared as a contestant on the long-running quiz show Jeopardy! He was described as a bartender from Los Angeles, but Spokanites may recall him from Stella's, the beloved but now-closed sandwich shop, or as an occasional contributing writer to the Inlander.

His star turn on TV didn't exactly end well. He trailed most the game and bet everything but a dollar in Final Jeopardy. The final clue — "A Portuguese explorer gave this name to an island he sighted off Africa’s coast 40 days after Easter" — stumped all of the competitors. Jon had answered "What is Madiera?" and finished in third with that final buck. (The correct answer, by the way, is "What is Ascension Island?") 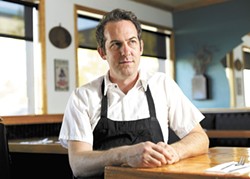 Meanwhile, earlier in the week, Jon's younger brother, Tony Brown, was rubbing elbows with Guy Fieri, who was in town filming for his Food Network show Diners, Drive-Ins and Dives. Tony, the chef and owner of Ruins restaurant on North Monroe, declined to give any comment to the Inlander, but one of guests present during filming confirms that Fieri was at Ruins for a future episode of DDD. (Fieri visited the restaurant twice: on Saturday, June 9, and again last week.)

Luke Baumgarten, one of the guests at the June 9 filming, gives this account:

"We got there on Saturday around 10. After a little milling around, the crew sent us in the side door. Guy was filming his intro by pretending to talk into the payphone that still sits near the front of the restaurant. He seemed amused to be in a place where pay phones still exist.

"Guy came in a few moments after we’d taken our seat and started off by apologizing. He said there were a couple tiers of places they feature on Diners, Drive-Ins & Dives and that Ruins was top tier. The top tier places, he said, get a lot of love on the show, and he said he gets angry emails from locals who find their favorite spots overrun by Triple-D tourists. He said something to the effect of, 'You’re going to need to run people out of this place!'

"When we got to attend the filming at Chaps 8 years ago, Guy methodically went around for over an hour interviewing people. This time he spent about 15 minutes, interviewing only one table — a man and his father who Guy seemed to know personally. After that the crew quickly packed up and we were left to eat our dirty fries, taquitos, gnocchi and a couple other dishes.

"After everyone left, Tony came around to each table, told us he’d gotten to the restaurant at 1 am to prep for the filming and then thanked us for coming."

No word yet on when the episode might be broadcast.