Possibly the single greatest winter outdoor action event ever held was the Red Bull Supernatural snowboarding competition. Maybe, like me, you were glued to a TV set when it first aired after weeks of anticipation from having seen the heart-stopping trailers. Or maybe you didn't even realize you were watching it but just happened to look up at a screen in some local bar or restaurant in disbelief as you watched some of the world's greatest snowboard athletes push the limits of freeriding and big air all rolled into one event.

The lines were so steep and the airs so comically huge that you could see on the face of almost every participant at the end of their run that they were glad to have not only competed but also to have simply survived. Supernatural was a competition so unique it wasn't even really a competition but rather a magnificent bonding event for a world-class band of winter warriors. The life span of this epic event was far too short-lived, but if you managed to view it, you will always have adrenaline-rushing images burned deep into your cerebral cortex. If you haven't ever watched it, then stop reading this right now and Google videos of the event so you can really understand what the rest of this article is all about.

You see, the thing is, this event wasn't held on some far off and hard-to-visit location like the French Alps, it wasn't held in the beard-deep powder of Japan, and it wasn't even held on the more reasonably nearby and legendarily steep mountain slopes of Alaska. No, it was held a mere couple of hours north of Spokane at one of the greatest snowcat-riding operations known to humankind, Baldface Lodge. What this means to the Inland Northwest rider is that you too can ride the slopes that formed permanent bonds amongst some of the greatest snowboarders to ever get lost in the white room. The Supernatural event and Baldface Lodge were brought to reality largely through the efforts of one man, a one-time American but now decidedly Canadian visionary and famously bald-headed snowboarder named Jeff Pensiero.

Over the past decade or so, I've been lucky enough to join Pensiero and his crew every winter for some of the best powder turns of my life accompanied by delicious food, the finest folks you'll ever meet, and a unique nightlife. Every year in early January, a few of my best friends and I make the trip to the airport in Nelson, British Columbia, where we meet up with a couple dozen or so other like-minded individuals and are greeted by some of the friendly faces from Baldface Lodge. After a short but thorough helicopter-safety briefing, we climb aboard a glorious whirlybird, are whisked high into the air and afforded amazing views of Nelson and the West Arm of Kootenay Lake. 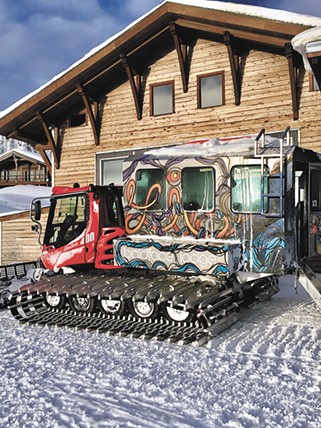 After just a few short minutes of breathtaking scenery, we are gently deposited at the snow-covered wonderland known as Baldface.

Each and every day spent at this wondrous place unfolds like some kind of powder-laden dream sequence. The morning begins with a breakfast spread so appetizing it's always important to remind yourself that you're going to be riding all day and it might be wise not to be stuffed to the gills — but if that's your thing, it's definitely an option. Once you're fully fed and caffeinated it's time to climb aboard one of the mural-adorned snowcats and head into the mountains for a full day of powder slaying.

Run after run with names like Scary Cherry, Cheeky Monkey, Pacific Ocean and Soul Patch provide everything from steep old-growth trees to wide-open bowls with untracked lines just aching to be carved up. Lunch at Baldface is consumed on the cat rides back to the top, so not a wondrous powder-shredding minute is wasted. After a day filled with so many glorious turns you're almost positive your legs can't take anymore, your snowcat chariot delivers you mercifully back to the fantastically appointed lodge, and the day's fun is far from over.

Après ski brings delicious soup and appetizers accompanied by any beverage your heart might desire provided by a staff always rocking the famously ever-present Canadian smile. A few games of pool, pingpong or perhaps even a wood-fired sauna later, it's time to sit down with friends for a dinner that rivals the best restaurants around the world. Once again feeling fully satiated, you might choose to return to the bar to tell stories of the day, or maybe have your aching muscles soothed with a relaxing massage, or maybe you'll wisely wander off to bed to be sure you're well rested for the next powder-stoked day.

Personally, I'm always way too amped up from the day's epic adventures to call it quits early, but then again I suffer from a severe case of FOMO. Plus, if you stay up late enough, you might get a chance to literally press the lodge's famous party button, which simultaneously turns up the music, dims the lights and fires up the disco ball. Just don't request to hear any Journey songs as their music is strictly forbidden in this particular mountain environment.

It's almost too good to be true that world-class snow slaying and hospitality like this can be found so close to home. I'd urge you to put a visit to Baldface Lodge on your bucket list right now. Sure, it's expensive, sure, you've got to take time off of work, sure, your kids might be jealous, but if it's good enough to create memories of a lifetime for some of the best riders in the world, it's good enough to make memories of a lifetime for you. If you're smart or lucky enough to make the trip to Baldface, make sure to tell Jeff I said hello. Just don't ask him to play "Don't Stop Believin.'" ♦