Young Kwak
Data on the criminal justice system is essential for decision-making, but difficult and expensive to gather.

In 2016, Spokane County was awarded a $1.75 million grant as part of the MacArthur Foundation's Safety and Justice Challenge — an initiative to rethink how communities use local jails facing overcrowding. The challenge includes dozens of other jurisdictions across the country. Spokane's ultimate goals are to reduce the jail population and reduce racial and ethnic disparities in the system as a whole.

Before Spokane was awarded the money, Williams says members of the Spokane Regional Law and Justice Council (SRLJC), a group made up of city and county officials, including judges, lawmakers and law enforcement, asked for the community's input and support. She and others jumped on board." 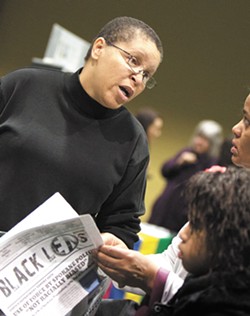 Young Kwak
The editor and publisher of the Black Lens, Sandy Williams, left, speaks with Charlotte Lewis and her daughter at a Martin Luther King, Jr. Day rally.

After the money was awarded, Williams says, that engagement dropped off, and requests for evidence of progress have been rebuffed.

In March, Williams and others who are frustrated with the lack of information sent a letter to the Law and Justice Council asking for data disaggregated by race, ethnicity, gender and age.

Separately, in April the American Bail Coalition (ABC), a trade association that works to further the interests of the commercial bail bond industry, submitted a records request to Spokane County, as well as the other Safety and Justice Challenge sites. Part of ABC's request asks for proof that the reforms are working. In other words, is the jail population going down?

So far, jail statistics indicate the population has held relatively steady for the past couple of years, and pulling out statistics on racial disproportions has taken longer than expected, says Jacquie van Wormer, a criminal justice professor who has been heavily involved in the grant work.

"The data exists in these siloed database systems," she says. "We collect so much data, but it's collected to hold records, not for the purpose of analysis. That's a whole different process."

Efforts to reduce the jail population in Spokane have largely focused on people charged with crimes, who are waiting for their cases to be resolved. The county has used the grant money to develop an algorithmic risk assessment tool that uses personal information to calculate a person's likelihood to skip court or commit a new crime. The Office of Pretrial Services, which monitors people released before their trial, also got a boost.

Williams, along with Spokane NAACP President Kurtis Robinson, Morning Star Baptist Church Rev. Walter Kendricks and Carmen Pacheco-Jones, chair of the Law and Justice Council's subcommittee on racial equity, say that before the letter was sent, not enough effort had gone into addressing racial and ethnic disparities.

An analysis of Spokane data from 2014 shows that African American and Native American adults were detained before trial at a rate about six times higher than white adults. The analysis showed disparities in arrests and the average length of stay in the jail as well.

But now, there has been some movement. Hundreds of county employees have recently gone through implicit bias training, van Wormer says, from those working in corrections, to the courts, to law enforcement.

Separately, members of the Law and Justice Council received an introduction to a racial equity toolkit, a set of questions that forces policymakers to consider whether new laws and policies could impact people of color and minorities in disparate ways.

"I have to say, the tone and receptiveness in the room was encouraging," says Julie Nelson, the director of the Government Alliance on Race and Equity, who led the tool kit discussion.

And at the end of April, the Spokane City Council approved a resolution to partner with the Law and Justice Council to fund and implement the racial equity toolkit.

"Studies that we've done from voluntary police stops, to who gets searched, to who gets arrested, to how long sentences are, to who gets programs, are racially disproportionate," Councilman Breean Beggs said ahead of the vote last month.

Although Councilman Mike Fagan ultimately voted in favor of the resolution, he expressed reservations about his support for allocating funds to pay for it down the road.

Cherise Fanno Burdeen has butted heads with the American Bail Coalition for several years now. As the chief executive of the Pretrial Justice Institute, a nonprofit whose goal is to eliminate money bail completely, the two are natural enemies.

She describes sensationalized TV commercials put out by the ABC and mailer campaigns with mugshots of people released from jail before their trials. The ABC has also worked with the American Legislative Exchange, a group characterized as a "stealth business lobbyist" by the New York Times that pairs corporations with conservative lawmakers to craft "model bills," to further the interests of corporations.

Fanno Burdeen sees the request for information in Spokane as the beginning of another attack against bail reform.

ABC Executive Director Jeff Clayton says they're just looking for evidence that the initiatives are working. He says the organization is considering publishing a report when the requests from Spokane and the other jurisdictions are filled.

Yet, support for bail reform is gaining momentum. Last year, New Jersey became the most recent state to essentially do away with money bail. The state replaced it with a system that allows judges to detain those accused of crimes based on a person's risk to the community. An analysis released earlier this year says the new law created "a more comprehensive, reasonable and most importantly, a fairer system of pretrial release." The problem is, it can be expensive.

The bail bond industry has challenged the constitutionality of the New Jersey law, and California is considering a similar measure, which Clayton says he's opposed to.

In addition to Spokane's work through the MacArthur Foundation, Yakima County recently implemented a new system of releasing those accused with minor crimes, usually with some sort of court-ordered monitoring, rather than bail. A study recently found that more people charged in Yakima were released pending trial, and most did not go on to commit other crimes.

In April, Spokane County requested an extension to complete the reforms called for in its grant application to the MacArthur Foundation, including implementation of the race and equity toolkit.

Spokane's average daily jail population has fluctuated between about 900 and 1,000 inmates since 2015, according to jail statistics. Spokane County endeavored to reduce that by 12 percent, below 800 inmates, by 2018.

"I don't believe we're showing any real true movement in getting that jail number down, and that's one of our main concerns," says Spokane City Prosecutor Justin Bingham, who has been involved with the MacArthur reforms from the beginning.

Pacheco-Jones, the race and equity subcommittee chair, is encouraged by the recent trainings and the pledge from City Council to move forward with the racial equity toolkit.

"This has taken decades to build up, and it's not going to turn around in a year," he says. "We expected this to be a long-term struggle, and it is. We're not surprised or disappointed by that."

After the extension period ends, Griffin says he expects Spokane to apply for a renewal of grant funds.

"We assume we'll be involved in Spokane and the other cities for a few more years," he says. "We didn't think this was a problem where you could make one grant and solve it." ♦

The original print version of this article was headlined "Show Me the Data!"