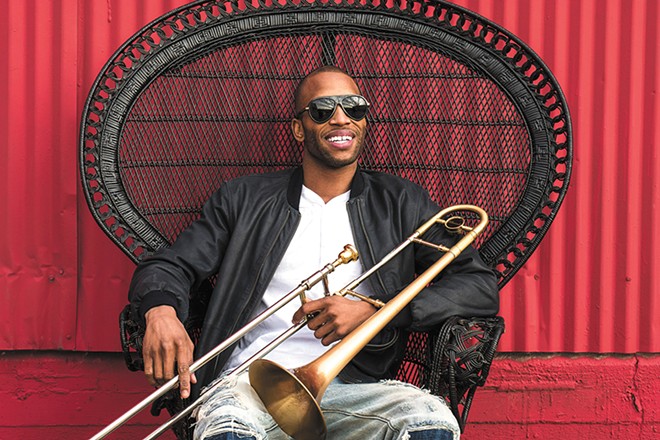 Troy Andrews, aka Trombone Shorty, brings a bit of the Big Easy to Spokane on Sunday night.

in one night-long burst of sound and energy.

The trombonist/singer, born Troy Andrews, delivers the classic, horn-driven, Big Easy jazz he grew up on, but the 31-year-old performer also incorporates the funk, rock and hip-hop that are now as much a part of the "New Orleans sound" as the funeral-line dirges in his childhood neighborhood of Tremé. On his new album, Parking Lot Symphony, Andrews manages to capture a lifetime of influences and all the undeniable chops that led to pop stars from across the spectrum — from the Red Hot Chili Peppers and Madonna to Foo Fighters and Macklemore — to come calling about collaborations or joint tours.

On a flight to Japan to play the Fuji Rock Festival, Andrews answered some questions via email before returning to his U.S. tour, which includes a stop in Spokane on Sunday.

INLANDER: New Orleans' music is so rich and full of great players. What was the first thing you remember inspiring you musically as a kid, beyond your parents?

Trombone Shorty: Probably my brother, James — he had me playing trombone by the time I was 4. My brother plays trumpet, he was a huge Louis Armstrong fan, and Louis always had a trombone player at his side. There was a shortage of trombone players in the family, so he really encouraged me on it.

What sounds outside of New Orleans pulled you in new directions musically as you were growing up? Was there anything your hometown friends and family just didn't understand about why you liked it?

Not really, no. Growing up, for the most part, the music that I was exposed to was from New Orleans, and there's so many different styles from different neighborhoods. My mom played Ray Charles, Stevie Wonder, Al Green, Marvin Gaye and that kind of thing. But most of my influences come from New Orleans. Even early Cash Money, Master P — I put that in with New Orleans music. A lot of the beats come from the second lines. It wasn't until I was older that I started to blend in things I learned from outside.

I know the New Orleans scene is supportive among musicians, but how much does friendly competition inspire the players to up their game and practice?

We would watch and learn from the established brass bands in the Treme — Rebirth [Brass Band] or Dirty Dozen [Brass Band] or Little Rascals, when they played at a jazz funeral or a party, or even just rehearsing. I'd stand on the side and watch what was going on, then I'd teach my band how to play all the different parts. Once the band saw us doing it, they'd pull us aside and tell us the right way and challenge us to learn it the right way. Then they'd go on tour and we thought maybe we could play against them when they came home, because we would see them challenging each other. But it was a positive environment with the older bands in the neighborhood helping us out and pushing us to be better.

The first time I saw you, it was a show including your band, Allen Toussaint and Rebirth Brass Band. All of you were great, but the performances were all different, too. Who are some of the bands you've seen on stage — in New Orleans or elsewhere — that inspire you as a music fan and as a performer?

Lenny Kravitz was a big one for me — seeing him commanding crowds, how he prepared, how he warmed up. Every detail from how he walked on stage, to the riffs that would catch the crowd, to the way he'd end the songs. Musically and personally he has been a big influence on me.

You tour relentlessly, for years on end it seems. What drives you to stay on the road, and what do you miss most about home when you're traveling the world?

We go hard, but it's due to people calling and wanting to hear our music — we're grateful. As long as we can play, we'll play, that's what we say. A few years ago we were doing 200 nights a year, but we pick our spots more now. It's still a sacrifice, to be away from home and family. That's what I miss when I'm out on the road — my family, and the food. As soon as I come home, I head to my grandma's for her red beans and rice.

You collaborated with a wide range of artists on Parking Lot Symphony, from Aloe Blacc to Alex Ebert (Edward Sharpe and the Magnetic Zeros) to Kevin Griffin (Better Than Ezra). How do those team-ups come about for a guy as busy as you are?

I've always been a fan of [Kevin's] band, and I used to go by his studio in New Orleans, and when he and his bandmates decided to sell it, I actually bought it. This year, we're playing his festival in Tennessee. And Alex moved to New Orleans a few years ago, but we'd bump into each other on the road, in L.A. or at festivals. Then he bought a studio, too! So I went over there and we wrote that song ["Where It At?"] there. I met Aloe at the NBA All-Star Game in New Orleans. So in those examples it's still New Orleans bringing us together, plus our mutual respect, and from there it was just an organic process of working on the lyrics and melodies.

What does joining Blue Note Records mean to you? It's such a legendary home for blues and jazz. Was that part of the appeal for you joining the label?

It's an honor. I love the music they have been putting out, and of course they have that iconic catalog. It's history; they're in the Capitol Building in Hollywood. I am proud to be a part of that, and it was special to collaborate with [producer] Don Was to create my new album. Moving labels gave me time to sit back and plan out what I was going to do, and I think it came through on the album. ♦