Over 450 miles in pursuit of flaky biscuits and steaming gravy.

Young Kwak
The biscuits and gravy special at the Cottage Cafe

I come from a family of eaters, and not in the way that all families — and all people — are eaters. We Baumgartens are so exceptional at eating, and eating in massive quantities, that it nearly defines our existence.

For my father and my brother, life’s greatest joy comes from steak, dipped in batter, chicken-fried, then drowned in a gravy consisting of butter, flour and pork sausage.

Being slightly more health-conscious, I prefer to consume my heart-attack gravy with flakey, buttery, leavened bread.

There are few things that are more delicious, when done well, than biscuits and gravy — and yet it’s generally the cheapest thing on the menu.

When the kinfolk heard of my plan to seek out exceptional B&G, they began to slaver and whimper. So last week, my brother Shane (who has literally nothing better to do) and I spent four days scouring 478 miles of scabland and Panhandle in pursuit of the area’s best B&G.

A list of restaurants that do B&G can fit on a single line, but only if you write it thus: “Almost every breakfast place in America.”

For the purpose of this throwdown (and our blood pressure, triglycerides, body image, etc.), that list needed pruning. So we asked friends (in the Internet sense of the term) and foodies for their thoughts on the region’s best breakfast spots. Special attention was paid to multiple-vote-getters. Geographic diversity was taken into account as well.

The scoring is as simple as the dish itself, awarding 1-10 points in three categories:

The Biscuit — How moist? How flaky? How flavorful?

The Gravy — How thick? How rich? How flavorful?

The Extra Sumthin’ Special — Anything (weird ingredients, interesting preparation, or just how the biscuits and gravy interacted) that contributed to the gestalt of the dish.

We worked up an itinerary and got an early start, setting off from our ancestral lands at the crack of 9 am.

Michael D’s was the most-nominated joint in North Idaho. One woman said the food is so good that she has considered kicking the door to the kitchen down, out of worry that they might have kidnapped her grandmother and forced her to cook family specialties. It certainly smelled good down the street.

Inside, we strode to our seats past paintings of Cataldo Mission, the Ironman and other iconic North Idaho scenes, our noses sniffing at fruit-topped waffles and heaping omlettes. When the B&G finally came,  it was just completely … meh.

The biscuits were dry, and not especially flakey. The gravy wasn’t overly heavy, which was nice, and had more chunks of sausage than the Hoot Owl, but the meat added mostly texture, not flavor.

We looked around at the swollen Saturday morning crowd and everyone looked to be enjoying themselves immensely. But then, no one was eating the B&G.

Ponderay, Idaho, feels like Sandpoint must have before Ben Stein and Viggo Mortensen moved to the area. It’s rural, blue-collar and unpretentious, which made it prime hunting ground for good B&G. There’s nothing less pretentious than a meal that evolved from a sauce of pork drippings and flour poured over hard tack.

The Hoot Owl revels in Ponderay’s roots. Entering through a rough-hewn pine-pole porch, you find pea-green walls and a white pine-looking counter. Very country. A sign above it opines, “Behind every successful man is a woman who couldn’t be more surprised.”

They boast about their biscuits, which are indeed fall-apart flakey and made daily. The gravy wasn’t quite as strong. It was peppery, but that was about it flavor-wise.

The real highlight of the meal for us was The Moon Man Special. It’s a half-order of B&G given a pop of sharpness, earthiness, and pork flavor from a topping of lightly grilled onions, mushrooms and more crumbled sausage.

The buzz on this place was so good we drove to Moscow twice (after misreading the closing hours the first time). It was worth the extra 180-odd miles.

Here began a decided shift from thick biscuits and thick gravy to thinner buns and lighter gravies. In the case of the Breakfast Club, it’s probably intentional. Their house specialty stuffs a slightly-above-average biscuit with bacon and an over-medium egg, lays it on a bed of hash browns and drenches it in gravy.

The B&G alone is good. Stuffed, it verges on excellent.

On the final morning of our search, we walked into the always dim, always friendly recesses of the Satellite (which is as good a place to end the night as to start a morning).

While it didn’t yield the winning B&G (though it’s a close runner-up), the Satellite did teach us something about the value of an excellent biscuit.

Shane pointed out that each of the other places was, to a degree, defined by its gravy, either for good or ill. The Satellite’s gravy is serviceable but not spectacular.

The biscuit, though, is beyond memorable — partly because the bottom of each piece is toasted and buttered. The toasted crunch adds a satisfying textural element and, somehow, the buttery biscuit brings out a ton of flavor in the gravy.

Two words: Heah-vuhn. The Cottage is an adorable English-style country house placed, confusingly, amid the scab of car dealerships off the Sprague exit on Appleway Avenue. If you’re not looking closely, you’ll miss it.

And missing it would be a shame. Their food is universally good and their biscuits and gravy are nothing short of the religious experience we went looking for.

On the third day, Shane and I were as weary as Saul on the road to Damascus. Once the meal was served, our lives were similarly changed.

The biscuit was on par with those we’d had previously, but the gravy, which was buttery and tangy and flavorful despite also being light and having almost no visible meat (truly such a thing must be the work of God) was a revelation. Like Revelations. 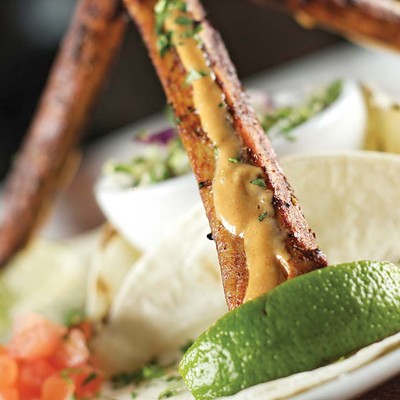