From fires to car crashes, three local eateries are rebounding after major setbacks 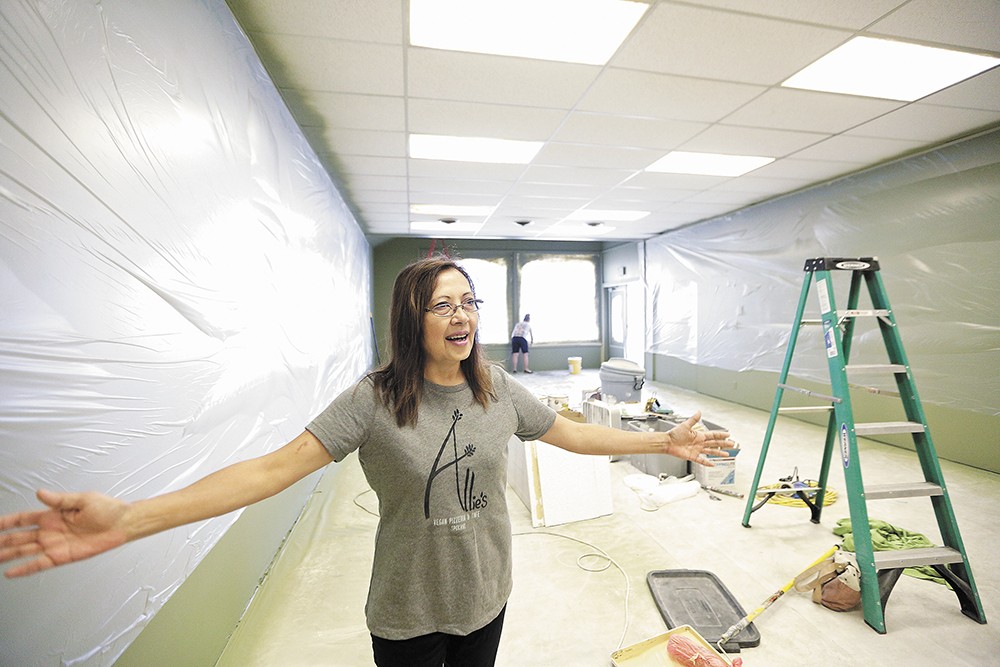 W earing a T-shirt stamped with the logo of her family's Spokane business,

Allie's Vegan Pizzeria & Cafe, the burn scars on Atania Gilmore's exposed arms are lasting evidence of what happened one afternoon three months ago.

Just after she and her staff were wrapping up Sunday brunch service on that 95-degree June day, a fire started outside the popular north Spokane vegan restaurant, quickly engulfing the back of the building in flames.

One person's careless decision to toss a cigarette butt in some bushes along the side of building nearly devastated Gilmore's growing local business, which she opened a year and a half ago in a spot just north of the busy Nevada-Wellesley intersection. Before six fire trucks arrived to douse the flames, Gilmore and her staff ran outside with fire extinguishers and a garden hose, trying to contain the fire.

Damage to the building, constructed in 1905, was so severe that it'll be another three to four months before repairs needed to reopen the restaurant are complete. The fire destroyed the back outer wall near the fire's origin, along with the roof, siding and most of the floor.

In the meantime, Gilmore and her staff have been able to focus on getting Allie's up and running sooner than projected with a new, second location on the South Hill that she plans to keep open permanently.

"I was worried; I thought, we're not going to survive this," Gilmore recalls. "That's when finding this location was just the best news. We're being super aggressive, opening within a matter of weeks from getting the keys."

Formerly occupied by the now-closed Lalo's Pizza, the space already had some of the needed infrastructure, giving Allie's a head start. Gilmore hopes to open the South Hill restaurant, at 1314 S. Grand Blvd., Suite 6, by mid-September.

It's thanks in part to her realtor, NAI Black, that Gilmore was able to secure this second location while waiting on the Nevada storefront. Since she's leasing that location too, she's not financially responsible for the building's structural repairs. She says that damages there total more than $250,000.

As a business owner, Gilmore estimates she lost $15,000 worth of inventory and could stand to lose more than $100,000 in sales between June and December. While insurance will cover the lost inventory, some relocation costs and some of her lost business income, Gilmore worries that once Allie's does reopen, it could be like starting all over again.

"My fear was losing that momentum in the community and with our customers," she says. "Being shut down for six months is an awfully long time."

Not all unfortunate events

lead to unexpected opportunities. At least, not at first.

Two miles south of Allie's, after Nevada becomes Hamilton Street as it cuts through the Logan Neighborhood, the front door of Spokane landmark Donut Parade is still boarded up with plywood. In late June, yet another misfortune befell the family-owned business when the driver of a red Honda Civic fell asleep at the wheel and plowed into the shop's corner, shattering its glass front door and splintering the wood around it.

It was the last thing that Donut Parade's Reno family, who took over the longtime business in 2008, were equipped to deal with. They'd just publicly shared with the community, via local media outlets, that the shop was struggling to stay open. Profits are still down, and matriarch Christian Reno says the business is falling behind on bills.

Though the accident — which didn't hurt anyone inside the shop, though a pedestrian standing at the street corner outside was injured — was more than two months ago, the Renos are still waiting for their building's landlord to repair the front door. They'd fix it themselves if they had the money, Christian says.

"It's like the whack-a-mole game, that's what I keep telling people," Reno says of their struggles as she gets ready to close up Donut Parade for the day at 1 pm. Its crowd of daily regulars, mostly retired folks, are just finishing up their coffee at the counter and settling up their bills.

"People want us to stay here, and we want to stay here," she continues. "We're just getting by, and going day by day. The future is completely unknown."

Now, Reno is most frustrated that some customers think Donut Parade is closed because of its boarded-up front door. It's been a tough message to communicate that no, the shop isn't closed, especially when bringing in customers is so critical to the business' long-term survival. Donut Parade has been continuously operating since 1968, a fact reinforced by its outdated interior.

another local restaurant and bar is facing the aftermath of a situation outside of its owner's control. In early August, a fire on the second floor of a historic downtown building, at 107 N. Fourth St., caused serious water and smoke damage to the street-level Beacon Pub.

General manager Rich Morrow says Beacon may not reopen until as late as October. While the fire didn't spread to the bar and nightclub, water to fight the flames damaged the ceiling, floor and the bar's point-of-sale systems. Smoke from the fire also ruined about $6,000 worth of liquor in the bar, he says.

One of Morrow's main concerns with getting the business back open has been making sure his staff of about 15 aren't without pay.

"I do have to say, we're lucky enough to live where we are. After everything happened, I had other businesses call me up and ask if it was OK if they could borrow staff for some big event weekends," Morrow explains.

In Spokane, Allie's owner Gilmore also has been making sure her staff aren't without work. Right after the fire, the vegan restaurant began renting space in a commercial kitchen to prepare food for event catering, and to sell at area farmers markets and festivals.

"The main point is that I've been able to keep my staff, and that has been very important for me because the staff has made [Allie's] successful," she says. ♦