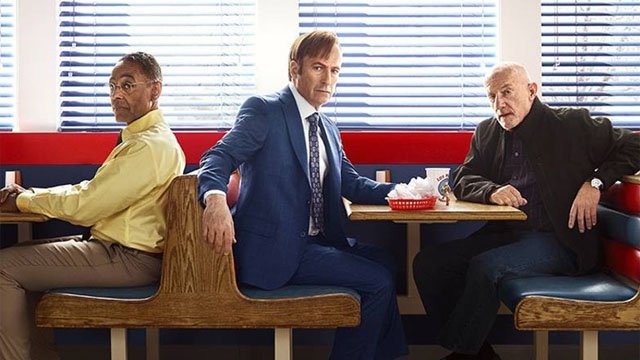 AMC
Ultimately, the middle guy has become the most interesting.
It's a paradox, I know.

When I rank the top TV shows of all time, Breaking Bad remains the king. Or, kingpin, rather. Breaking Bad is a masterclass in nail-biting suspense, tight plotting, gorgeous cinematography, relentless pacing and riveting acting.

And yet, when you pit them directly against each other, head to head, I dare say that Better Call Saul — which premieres its fourth season tonight — is better than Breaking Bad.

Breaking Bad is an operatic tragedy, full of scheming gods and anguished transformations and drug deals with the devil. But Better Call Saul is something much smaller, but much more real: It's less a tragedy of how one man's pride and ego turned him into a villain and destroys everything he loves, and more of a tragedy about how easy it is, despite our best efforts, to become the caricature our worst critics see us as.

Breaking Bad is about monsters. Better Call Saul is about humans.

Just as Walter White "breaks bad" to become the drug kingpin Heisenberg, small-time lawyer Jimmy McGill breaks bad to become Saul Goodman. But Walter White's arc is largely a descent in one direction, one immoral compromise leading to another, as Walter's depravity sinks lower and lower until there's no humanity left.

And yet McGill's upcoming heel-turn is more crushing.

Not because he leaves a huge body count, but because for so much of the series, he's desperately trying to become a better person. He wants to do right. He's genuinely smart, genuinely talented. But the world he finds is so often unjust. When the whole karma thing feels like a con, why not con them right back?

Walter is a snarling wolf. McGill is a sad-eyed puppy who's been kicked and mistreated.

Better Call Saul doesn't have breakneck pacing. It has something that can be even better. It has slow, confident, perfectly controlled pacing.  If Breaking Bad had stir-fry pacing, Better Call Saul is closer to a marinade and a braise. It's slower. But it's richer and more complex.

Think of one of Breaking Bad's best episodes, the one that took place entirely in one room, focusing on Walt and Jesse trying to kill a housefly that could contaminate their meth lab. It was great, not because it had a ton of plot development or action sequences, but because it downshifted, focusing entirely on character, particularly the relationship between Walt and Jesse.

Better Call Saul applies those lessons and that tone to the entire series. I've never seen a show more confident that it has your attention, simply through the mastery of the craft of television.

From the very beginning, the power dynamics between the two are informed by decades of bitterness. Chuck, a former successful attorney, is smug and haughty, seeing his brother as a screw-up and a joke. But he's also mentally ill, believing himself hypersensitive to electromagnetic fields. He lives in a house without electricity, walls covered in tinfoil, navigating by lamplight. He's reliant on Jimmy for help.

Each brother resents the other, but each pities the other as well. They do horrible things to each other, but they almost always tell themselves that it's in their brothers' best interest. Plenty of shows, even great ones like Breaking Bad, make simple bright red ideas like "jealousy," "ego" and "revenge" as their character motivations.

But Better Call Saul shows just how complicated humans can be. Even the montages often have more humanity. Breaking Bad loved its montages, in particular, its luxurious meth lab cooking sequences.

But I prefer those from Better Call Saul, precisely because they focus on the more mundane aspects of life. Consider the montage from the second episode of the series, focused on McGill's repetitive, unglamorous work as a public defender.

It's a four-and-a-half minute sequence, looping the frenetic strings of Vivaldi as McGill argues with the parking attendant, negotiates with prosecutors, eats his lunch in the stairwell, psychs himself up enthusing, "It's showtime, folks!" and grandstands before a mostly empty courtroom.


Or consider its spiritual counterpart, from the second season, following Kim Wexler, McGill's on-again-off-again Type A girlfriend, as she tries to find a case that will allow her to return to her law firm's good graces.

Set to Gypsy Kings' melancholic Spanish-language version of "My Way," the montage hits beat after beat of rejection, as Wexler works late nights and weekends, making calls in the bathroom, the stairwell and the parking garage, calling every contact she has, hoping to charm her way into finding a new case.

It highlights how similar her persistence and ambition is to McGill's. But where Jimmy focuses on moxie and pizzaz ("It's showtime!") Wexler is all about tenacity. Unlike Jimmy, she goes by the book — and then highlights that book and takes notes with perfect penmanship.

Nobody's murdered in any of these montages. They're beautiful montages about the sorts of things people do every day. But it's precisely because the scope is so narrow, the people so normal, that the show ultimately feels more meaningful than Breaking Bad. Even if it's not as in-your-face impressive.

In fact, if there's any flaw to Better Call Saul it's when it becomes too much like Breaking Bad. Whenever there's a plotline featuring Mike, the ex-cop turned fixer from Breaking Bad, I want to yell at the screen, "Booo! Enough of with this drug underworld stuff! Get back to Jimmy McGill's brother wrestling with mental illness!"