Everything is Terrible! brings its bizarre collection of nostalgia, psychedelia and comedy to Spokane 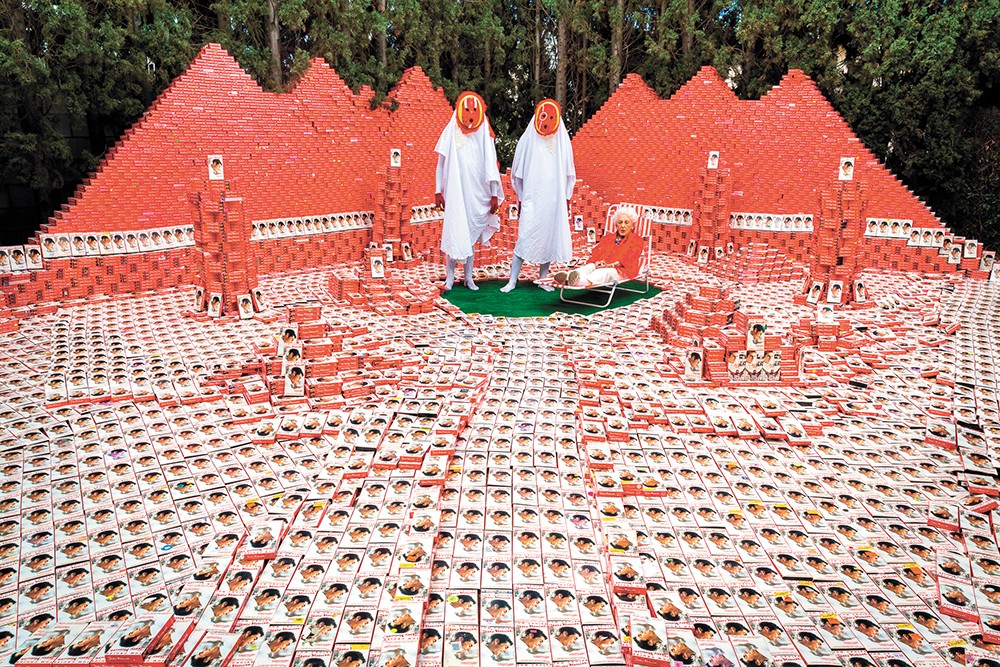 Jim Newberry photo
Guerilla video artists Everything Is Terrible! would love to take that VHS copy of Jerry Maguire off your hands.

Alex McNeely is Coeur d'Alene's most avid consumer of Jerry Maguire, the 1996 Tom Cruise film about a sports agent trying to make it big. In the last 10 years, McNeely's collected more than 1,400 copies of the film and is the largest known Maguire collector in the country, and probably the world.

But he has never actually seen Jerry Maguire. And at this point, he readily admits that it might be better if he doesn't.

Even if he wanted to watch this classic '90s rom-com, McNeely would have to find a VCR. After all, every single copy he's owned has been on VHS. And ultimately, McNeely doesn't keep them. He donates them. All of the copies McNeely has acquired have gone toward a massive collection of more than 26,000 "Jerrys," as they're known. The goal: Build a giant pyramid of Jerry Maguire in the middle of the desert between Los Angeles and Las Vegas.

I'm not making this up. This is the stated goal of Everything Is Terrible!, a media and performance group making its way to Spokane on Friday for a show at the Bartlett.

What happens in 5,000 years, after humans have died off from the climate crisis, when an alien race lands on Earth and discovers this monument to excess? What anthropological questions will they ask themselves? What will they think of our civilization? Will they laugh? Cry? Eviscerate our remains and try to forget?

I pose this conundrum to Dimitri Simakis, one of the evil geniuses behind the Jerry pyramid and a founder of Everything is Terrible!

In essence, he says yes. That is the point of the pyramid.

This sort of exhibition art might be the guiding philosophy/principle behind Everything is Terrible! (or EIT). For 10 years, they have been scouring the dustbins of American society, collecting forgotten or dead media from bargain bins and thrift stores — mostly VHS tapes from the '80s and '90s, such as So Your Cat Wants a Massage and My Yiddish Workout — and repurposing them into something... different.

It's easiest to describe EIT as "a media and performance group," but that only skims the surface. They're more similar to a modernist art experience, combining the spirit of dadaism with the insanity of 21st century internet culture.

Simakis says the live show in Spokane will be "all new" material. Expect weird film clips, puppeteering, "beautiful costumes" and "literal song and dance," culminating into a comedic and psychedelic experience.

Simakis doesn't like the term "so bad it's good" when discussing the films EIT repurposes. You know, the type of music, film or art of such poor quality that its flaws make it entertaining. That's kind of a shitty way to view other people's work, he says. Instead, he offers a different take.

"It's not bad to begin with. It's different," he says. "It's a certain type of folk art. It's not professional, for sure. It doesn't look legitimate, but that doesn't mean it's any less good, necessarily."

So while EIT's edit of Ten Little Indians might fill you with a sense of angst and existential dread, it's important to remember that somebody, somewhere made this, and now you're watching it. So enjoy.

But Simakis says there's another side to their films. Some are straight up dark.

Enter The Great Satan (2018), one of EIT's feature-length films, composed of news clips and Christian instructional films produced during the "Satanic panic." It's 75 minutes of incoherent religious zealotry, with occasional spikes of terror to keep things interesting. There's no plot to speak of, but there are varying degrees of intensity.

Some clips verge on borderline fascism, and those are the types of things Simakis says they want to expose.

For instance, "Do It Cuz Daddy Says So" is a children's instructional singalong that quite literally instructs its audience to implicitly "trust" and "obey" authority figures for no other reason than "cuz Daddy says so."

"All of this media is propaganda in some way," Simakis says. "'Daddy will explain it if he has time. Respect authority. Do not question authority. Go to school. Go to work. Don't talk.' It's amazing to see it that obvious."

The latest advancements in artificial intelligence and digital video editing have only expanded the potential for the nightmare realm of bizarre films.

"It's mind-blowing how endless this is. We don't think there is an ending," he says.

The weird films keep pouring in. And so do the Jerrys.

Jerry Maguire is beyond EIT, Simakis says. It's not about being "anti-capitalist" or poking fun at consumerism. Now, it's more about preserving the Jerrys for future generations and pushing the boundaries of art.

"We couldn't dream of something so unfunny at this point, but that's precisely why it must continue," Simakis says. "It comes back to experience and exhibition. Obviously, theres a level of stupidity. But it's our lives and that's what we want to do with it." ♦

The original print version of this article was headlined "Laugh, Cry, Scream in Horror"