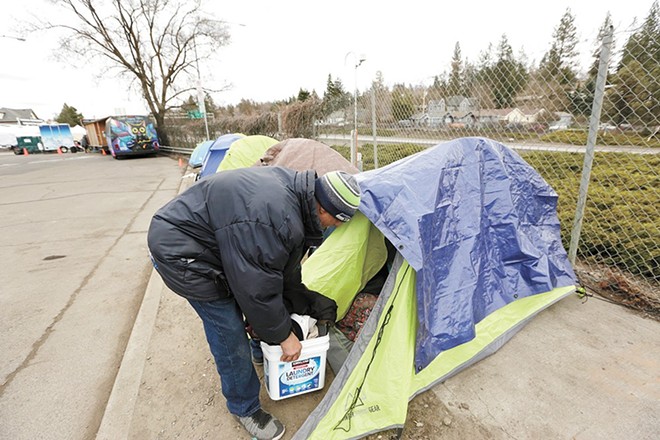 Young Kwak photo
Homeless shelters in Spokane have often been full this year, forcing some people to camp outside

The city of Spokane says it is developing a new website that will give daily updates to police and to the public on available bed space at local homeless shelters.

The Spokane Police Department unveiled plans for the new webpage on Monday, during the Spokane City Council's Public Safety and Community Health Committee meeting. During that meeting, council members brought up an Inlander article from October that revealed instances where police enforced laws against camping, sitting or lying in public spaces despite no shelter being available for the homeless people being cited. In several citations since last November, police appeared to reference shelter space as being available when it wasn't, and a couple of times suggested that local parks would suffice as adequate shelter space.

On Monday, Council President Breean Beggs says the article led to a conversation about how to have a "real-time, up-to-date, public-facing website" that shelter providers can access and input bed space directly, instead of calling in numbers to the city each night.

Currently, the city maintains a shelter capacity report of its own that is updated each night, when shelter operators call in bed space. Those numbers are then fed into a dashboard that police can use out in the field. If there is no space available, they are not supposed to cite people for illegal camping or sitting or lying on public sidewalks.

The webpage discussed on Monday would allow the public to see those numbers, and it may allow shelter operators to input bed space directly. However, while the police department indicated it would provide "real-time" data, city spokesman Brian Coddington tells the Inlander that the public shouldn't expect that.

"It's not going to be real-time data," Coddington says. "It's going to be every 24 hours."

Coddington wouldn't give an exact timeline on when the page will be ready.

"I don't think I could put a date on it just yet," Coddington says. "The technology has been developed, and we're fine-tuning how this tool can be best utilized."

The new system would also allow police to update the bed counts themselves, should they call a shelter and determine that there is in fact bed space, according to Monday's presentation.


Spokane Police Chief Craig Meidl told the council that answering questions for the Inlander article in October raised some concerns about the process that police use to determine shelter space before citing people for sit-lie or illegal camping. At times, the system would show shelter was full, but that could change during the day, he says. Officers also used Truth Ministries as available shelter space when they weren't supposed to, because starting this spring it was not under contract with the city and not considered a low-barrier shelter. But "that information did not make it to us," Meidl says.

Meidl says officers have now been told to write down where there are vacant beds in their police reports for sit-lie or camping citations.

Beyond the logistics of counting shelter space, however, City Councilwoman Betsy Wilkerson raises the concern that shelter space may be available on one side of town, but a homeless individual may not be able to obtain transportation there.

"There's no consistency on how to get that person across town," she says.

Meidl says officers have sometimes given people a ride to the shelter, but sometimes the individual has items that may not fit in the police car.

"I don't have an answer unless we were able to get bus passes from the [Spokane Transit Authority]," Meidl says.

If the webpage updates every 24 hours, and not in real-time throughout the day, it remains unclear how police will determine daytime shelter availability, and whether they will continue to enforce laws targeting the homeless when no shelter space was available the night before.

Coddington says that's part of the conversation being had within the city before launching the website — making sure everybody is "comfortable with knowing the limitation of the tool." But he says seeing shelter availability would be valuable for people who might need to access services.

"It will take the next step in terms of transparency, so people are able to see the data and information the city is seeing," Coddington says.