Get Lit!: Artists, writers team up to see old places in new ways; plus Alice, podcasts and poets 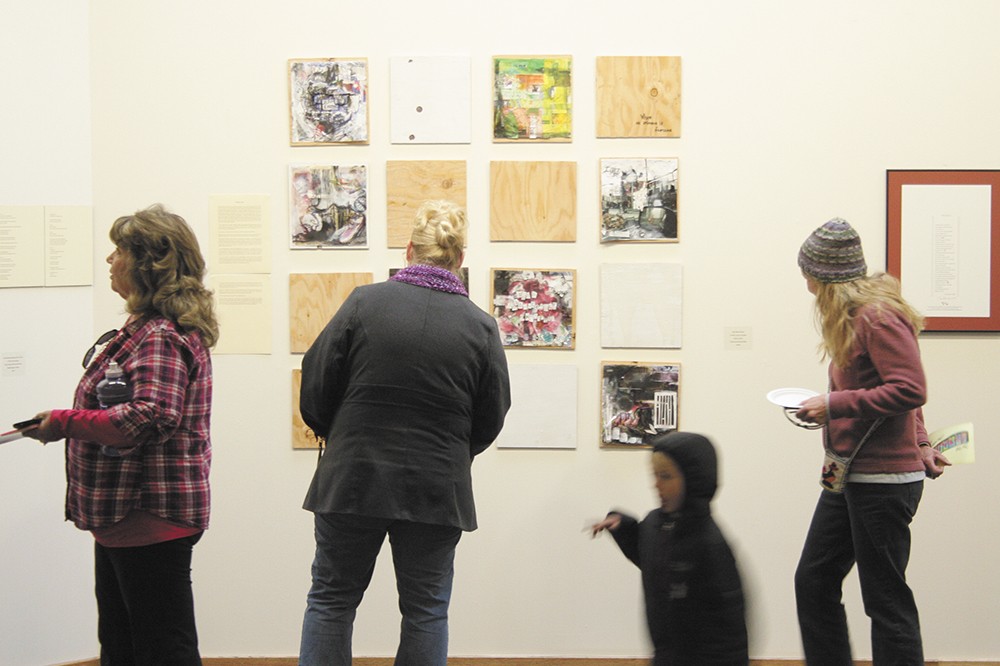 Memory Game at the "Landmarks" exhibit.

during the literary festival is a community event, from start to finish. The show brought 17 local writers and visual artists together — all focusing on the theme that gives the show its name: "Landmarks."

"How do you develop a cultural identity?" says Austin Stiegemeier, Spokane Arts program manager. "A big part of (development) is commemoration of the place that we live, and the landmarks and the landmark buildings. But at the same time we wanted something that could be universal."

Get Lit! Director Melissa Huggins says each writer/artist pair interpreted the theme differently. Some, like a piece by Inlander art director Chris Bovey and writer Emily Gwinn, focused on physical Spokane landmarks, while others interpreted it personally. Huggins was impressed with the diversity of collaboration.

"I think one of the most interesting things about viewing the exhibit was how the different pairs decided to join their work," Huggins says.

Some groups collaborated in a very literal way. Others approached the project abstractly, using their partner's writing or art to influence their own creation. Either way, Stiegemeier thinks the process gave the art depth.

"The nice thing about collaboration is you get new work and you get people out of their bubble," Stiegemeier says. "As soon as you start working with someone else you have a collision of ideas."

Writer Ellen Welcker and artist Lauren Campbell paired up for the exhibition. Their mixed media collage Memory Game was the product of a weeks-long collaborative process, Campbell says.

"I love anything that is going to push me outside of the way I typically see the ways of creating," says Welcker. "I think I secretly wish I was a painter, but I'm not."

The two met weekly to brainstorm. When they finally settled on their medium, they traded the art piece back and forth, each adding a bit to the collage.

"'Landmarks' ... felt challenging because neither of us are from Spokane and neither of us have been here very long," says Welcker.

The final product is something neither of them would have come up with on their own, and that's the beauty of true collaboration, Welcker says. It pushes the artists, and gives the viewer a unique visual experience.

A Trip for All Ages

Tumble into Wonderland with Book-It Repertory Theatre! This 45-minute interpretation of beloved literary classic Alice in Wonderland allows audiences of all ages to interact with the ever-grinning Cheshire Cat, the cranky Queen of Hearts, and the quizzical Alice. Follow Alice as she unknowingly chases the White Rabbit into the heart of a new world, where she must learn to journey on in spite of Wonderland's haziness and tendency to misdirect her. Stick around after the show for a Q&A with the cast. (COURTNEY BREWER)

Both Sherman Alexie and Jess Walter write with such vivid humor and keen eyes for the culture around them that joining forces in 2014 to create a podcast was not only natural and comfortable, but inspired as well. The result, A Tiny Sense of Accomplishment, is a joyful experience for the listeners, always engaging and often hilarious, and includes everything from guest interviews to readings of works in progress, and sports commentary to regular digressions into ephemera well worth a trip down whatever logic wormhole they find. At Get Lit!, they'll record an episode in front of a live audience, and conduct a Q&A session together as well. (DAN NAILEN)

Area teens and college students take over a Get Lit! stage for an interactive poetry slam sure to reveal some talented young writers in an entertaining way. EWU's Writers in the Community hosts the competition of three-minute unfiltered pieces judged on content, originality, and performance. Registration is free, and participants are encouraged to bring a can of food to support shelters in the community. Kris Dinnison will share an excerpt from her upcoming YA novel You and Me and Him after the teen slam winners are announced. (COURTNEY BREWER)

Speaking of Get Lit!

A few of our most-anticipated events at the 2019 Get Lit! Festival

GET LIT!: Festival celebrates its 20th birthday with a massive lineup of authors, poets and events