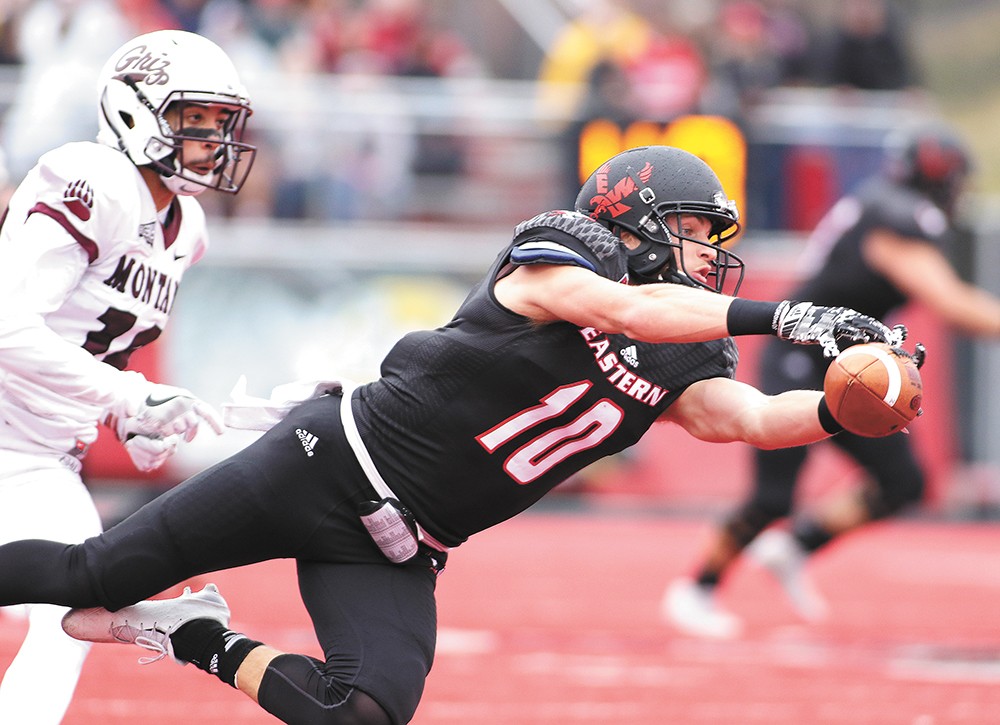 For several seconds, many of the Eastern Washington University fans

who'd just stood in barely above-zero temperatures for the previous three and a half hours had no idea why the referee was signaling a touchdown on the last play of the game. Those warm at home watching this FCS semifinal game on national television couldn't figure it out, either.

Trailing 38-34, Youngstown State had just driven down the field and had time enough left for one play from the 5-yard line, a toss to the back of the end zone, where the ball appeared to have disappeared into the back of Eagles linebacker Ketner Kupp. Somehow, Youngstown State tight end Kevin Rader pinned the ball against Kupp's back. Replay video confirmed that it was, indeed, a touchdown. Although there was one second left and the Eagles would try to lateral their way down the field on the ensuing kickoff, Eastern's season was over.

"The officials ruled it a catch, and they reviewed it and ruled it a catch. I couldn't tell — I couldn't call it from my vantage point, put it that way," was all that Eagles head coach Beau Baldwin could say about the play following the game.

The loss capped a season that began with Cooper Kupp — Ketner's older and more famous brother — announcing that he was coming back for his senior season, even though the wide receiver was already a sure NFL draft pick. Kupp said in training camp that he came back, in part, because he thought the team could win an NCAA championship. As it turned out, he was onto something.

The season began with the Eagles knocking off Washington State (which would go on to nearly win the Pac-12 North) in Pullman, and featured 11 more victories, with their only regular-season loss in overtime at North Dakota State, a team coming off five consecutive NCAA championships. Redshirt sophomore Gage Gubrud quarterbacked the team — coming seemingly out of nowhere — and eventually ended the season with an FCS-record 5,160 passing yards.

Cooper Kupp, who battled a bum shoulder for most of the season, took home his fourth consecutive All-America designation. He's the first player to earn those honors four times. Kupp's final career stat line: 428 receptions, 6,464 receiving yards and 73 touchdown receptions. All of those are records not just for FCS football, but for all of Division I. Kupp caught 10 balls for 180 yards and a pair of scores on Saturday in his final performance in an Eagles jersey — and it's unlikely that any other player will ever wear No. 10 for EWU.

With Kupp go several other stellar seniors who helped bring a lot of wins to Cheney, and a lot of fans out to the Inferno. Following the gut-punch loss on Saturday, Baldwin knew he was losing a special crew.

"It's such an amazing group and gave us so many memories," he said. "It was a resilient bunch the entire year, and they played the toughest schedule in school history." ♦