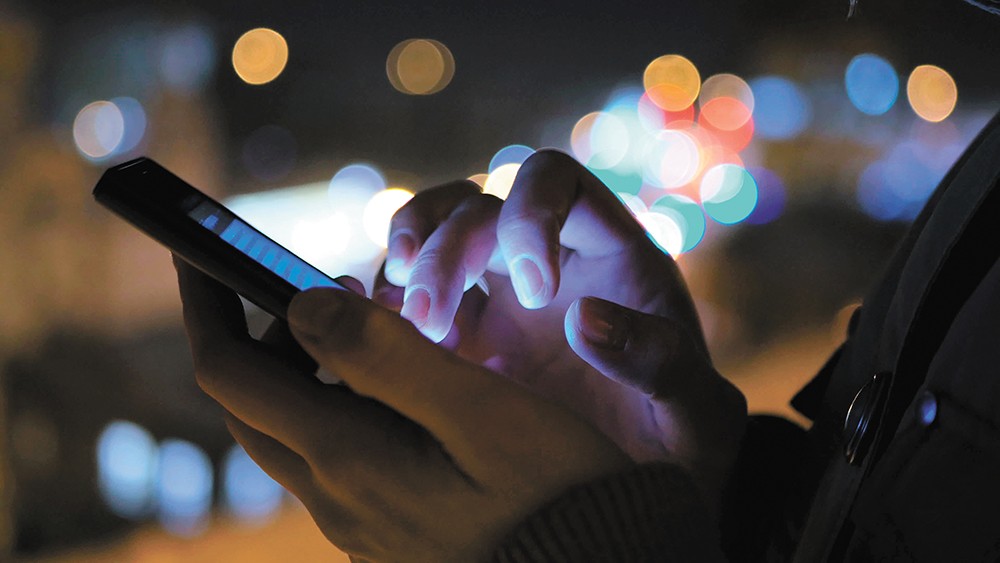 Law enforcement officials say parents should talk to their kids about the dangers of social media apps like Snapchat and Whisper.

Detective Sgt. Dan McDonald turns the lights off in a conference room and opens up an app called Whisper. The light from his cell phone spotlights his face as he scrolls through looking for sexual predators.

He passes by a few posts, the ones sharing random anecdotes or anonymous complaints from their day. There's one post asking for pictures, but that's not exactly the kind of thing McDonald has is eye out for.

Then McDonald stops and raises his eyebrows. It's a post asking if anyone wants to be "impregnated."

"Hey i liked ur post HMU," McDonald types. (HMU means "hit me up.") McDonald makes sure to type "ur" instead of the proper "your." It's less suspicious that way.

Most days, this is what the job looks like for McDonald. He sits in a room, gets on social media apps popular among teens — apps also popular among pedophiles — and then he catfishes anyone who's looking to rape or traffick kids. Whisper, which encourages anonymous people in the same area to interact with each other, is a common one. In the year that he's been stationed in Spokane, McDonald has helped catch all kinds of people who would have otherwise done harm to young children.

Yet as easy as it is for McDonald to potentially catch predators on this app, it's just as easy for kids to communicate with someone who wants to do them harm. This is the reality for teens in the social media age: Rapists, sex traffickers and pedophiles are just one click away. Rather than use fake identities, these predators use the online platforms to groom and take advantage of vulnerable children. The U.S. Department of Justice says about one in 25 kids receive online sexual solicitations in which the solicitor tried to meet the kids in real life, though it cites studies using decade-old statistics before many anonymous apps existed. More recent stats are hard to come by.

McDonald says the issue is more widespread than people think. And even as law enforcement has dedicated more resources to catching these people locally, they have a hard time keeping up.

"We could have 100 or 200 cops doing this, identifying these people," McDonald says. "And we'd constantly be busy, all day long."

"You have the fun posts, the goofy dog ears and mouths and different filters," he says. "Unfortunately, these apps are getting exploited and becoming something much worse."

What makes these social media apps the most dangerous for kids is the geolocation feature. When you sign up for Snapchat, it gives you suggested friends, some of whom a kid may not know at all but they add anyway. If the teen hasn't put themselves in "ghost mode," then any of their friends can see where they are at all times.

This is how Ferris freshman football coach Charlie Eglet found and allegedly raped a 15-year-old girl this summer. Eglet friended the girl, who lives in Moses Lake, on Snapchat. She assumed he was her age, court documents say. She did not have her location turned off, and he tracked her down when she went to Northern Quest Resort & Casino in Airway Heights.

"It's not a certain profile. It can be anybody."

After she reported the crime, McDonald struck up a conversation with Eglet using the girl's online identity. He got Eglet, 29, to corroborate details from the girl's account of the alleged rape and to plan a second meetup, with Eglet thinking he was still talking to the 15-year-old girl. When Eglet got to the casino, he was met by police. McDonald and an officer from the Kalispel tribal police department later got Eglet to confess to having sex with the 15-year-old, which is rape under state law. Court documents note that Spokane Police got a similar report in July, alleging that Eglet was tracking a different 16-year-old girl's location on Snapchat.

McDonald says cases like that highlight how important it is for parents to teach kids about "stranger danger" on social media and to keep their location private.

"You have to take the time and energy to learn about these apps," he says.

Since McDonald moved to Spokane to work with HSI on catching online predators, they've arrested all kinds of people — coaches, church leaders, foster parents and others — both here and in the rest of the state. It can range from single men looking to have sex with underage kids to people involved with sex trafficking.

"It's not a certain profile," says HSI special agent Sam Hart. "It can be anybody."

Usually McDonald and Hart catch predators by getting on the internet and posting ads, responding to ads, or striking up conversations with people. McDonald says it's a relatively new kind of law enforcement for the state patrol — one that doesn't involve troopers out in patrol cars or answering calls for service.

"Nobody that I know of who has gone into law enforcement goes into it thinking, 'I'm going to go down this path,'" McDonald says. "This is relatively new to us. But it's important. There needs to be a lot more of us doing this, no doubt about it."

McDonald is part of the patrol's Missing and Exploited Children Task Force (MECTF) and another task force focusing on human trafficking in Eastern Washington. In the last year that the state patrol allocated resources to the Spokane area specifically for these purposes, they're already seeing the need.

This summer McDonald was part of the raid of local Asian massage parlors that are suspected of sex trafficking women who work there. That investigation remains active, he says.

Meanwhile, the MECTF task force has spearheaded a series of what they call "Net Nanny" operations across the state, in which undercover officers catch people on the internet who want to have sex with children. Those operations have caught more than 200 people since 2015 and rescued dozens of child victims. In June of this year, one such operation, overseen by McDonald and HSI, led to nine arrests of Spokane County men ranging in age from 30 to 49 years old. That included a man named Kyle Dettorre, who worked at a nursing and rehab center in Medical Lake called Lakeland Village. Some of those men were caught by law enforcement through Whisper, says McDonald.

"We're getting a feel for the need for more resources put into this arena, which is a lot. We're getting an idea of how bad the problem is, which is bad," McDonald says.

"It's extremely tough," Gregory says. "We don't have the resources to go to the internet and monitor these sites constantly."

"It's a really, really dark world. And you don't realize how dark it is until you're really knee-deep into it."

That's why it's crucial to educate parents and kids on their social media use, he says. He likens it to kids going to the park and talking to strangers. If parents don't allow that, then they should also pay attention to social media.

"Why are we allowing our kids to go on an app that is specifically designed to have private conversations?" Gregory says. "It doesn't make any sense."

Scouring the hidden corners of the internet for sexual predators can affect McDonald's personal life, if he lets it, McDonald admits.

"You have to put the mission in focus. There's no better arrest than the arrests we're doing, because these people are actually doing harm to kids," McDonald says.

He tries to focus on how to do the job right. He has specialized training on how to talk to people online, how to make somebody reveal information. Kids should be able to grow up as kids, not lured and abused by the world of the internet.

"It's a dark world," McDonald says. "It's a really, really dark world. And you don't realize how dark it is until you're really knee-deep into it."

Back in the conference room where the state patrol works with HSI, McDonald goes back to his Whisper account. He's checking if the guy who wants to impregnate someone has messaged him back.

"Ummm...I'm the one doing the impregnating," the anonymous user says, pointing out that McDonald's profile says he's a man.

McDonald takes a second to come up with an excuse. He decides to just say, "duh."

"Did you have somebody in mind?" the account asks.

It's a possible hit.

"Now this guy thinks that I have somebody that I want impregnated, so you can see where this conversation's going to go, right?" McDonald tells the Inlander.

From here, McDonald can pose as someone selling a kid for sex. He can say he has an underage girl that he will sell. Most people would end the conversation there, or call the police.

But if the user is interested, then McDonald knows he has someone who wants to rape a child.