A ghost-less ghost story that haunts you with your own fears. 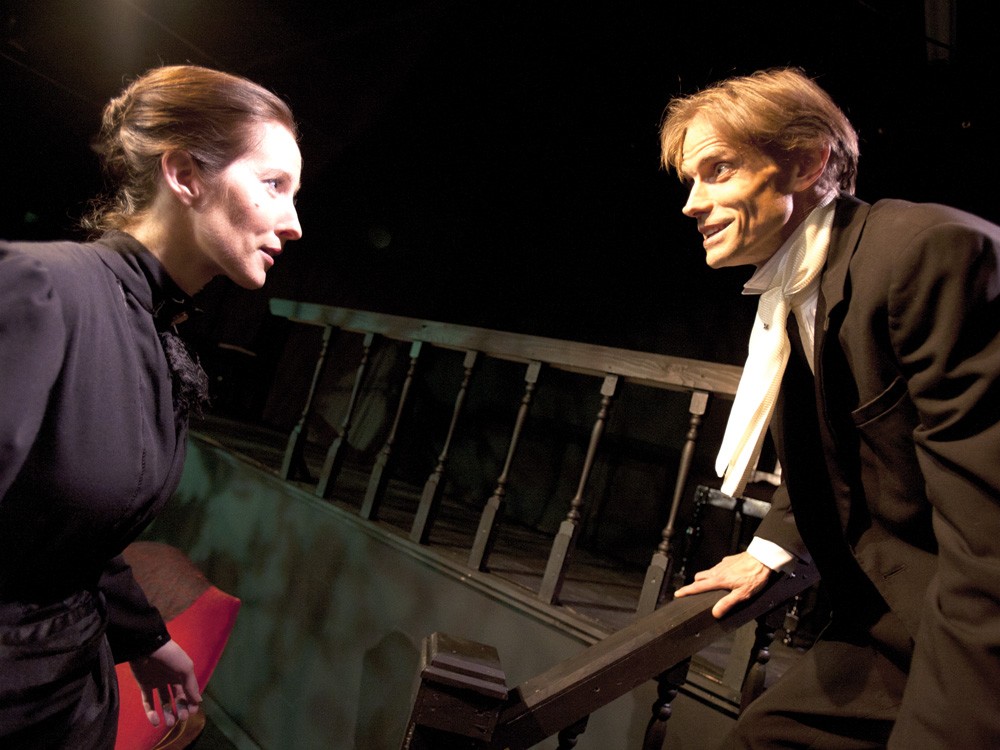 Mike McCall
Laticia Widman as The Woman and Doug Dawson as The Man.

The Turn of the Screw is a psychological thriller about a woman who starts seeing things — creepy things — when she takes a job as governess for a brother and sister.

Playwright Jeffrey Hatcher’s 85-minute theatrical distillation of Henry James’ 1898 novella doesn’t try to scare you with gobs of blood and guts. Instead, using just two actors and a plain set, Hatcher tells a ghost story in which you can’t see the ghosts.

That’s because they’re inside your head.

Some basic questions, then, about this thinking person’s fright night: First, is it scary? On opening night at the Civic’s Studio Theater, sometimes all 90 people in the audience were silent, leaning forward, breathless, intent. Then they twitched and sat up, sucking in their breath collectively.

Is Doug Dawson chameleon-like in multiple roles? On one hand, he overplays the seductiveness of the uncle (leaning in too close to make a point) and he settles for stereotype with the housekeeper. (Dawson sometimes exaggerates her into a cackling cliché.) On the other hand, as Miles, the imp who’s under the nanny’s charge, Dawson combines boyish fidgeting with adult menace.

Does Civic newcomer Laticia Widman convey the transformation of the governess from mouse to virago, along with her sexual repression? Yes, very well. Widman’s eager, credulous facial expressions in the early action twist into snarls and mania later on.

Do the lights and sound effects create spooky moments without calling attention to how frightening they’re trying to be? Again, yes. Dawson lurks behind an upstage curtain — making animal noises or tolling the hour — and it’s surprising how eerie that can feel just because it’s unexpected and happening right now in live performance.

The actor-generated sound effects become more prominent when Dawson, playing the devil-child with Chucky’s manic glee, pounds away at an imaginary keyboard. Next to him on the piano bench, Widman — with torso stiffening and face clenched — gives vent to the forbidden desires that she’s willing to detect in the manor’s “ghosts” but not in herself.

With good effect, director Susan Hardie returns at the end of the show to the way she introduced the governess: Widman with her back to the audience, posing at the top of a ramp, the bustle of her death-black Victorian gown hiding the repressed desire that seethes within. (And sometimes pops out.)

Is it that the nanny needs to preserve her own innocence by keeping the kids pure? Or that she projects her own taboo lusts onto little Miles and Flora, necessitating (in her own misconception) their demise?

The Turn of the Screw, filled with ambiguities like that, is a head-scratcher: You leave wondering if the Victorian lady thinks she has to defeat herself or scapegoat others.

And once you’re unsure if the scariest stuff involves the ghosts, the kiddies, the nanny or yourself — well, that’s when the Civic’s production has fastened your fears down, rock-solid, with an extra turn of the screw.

Event: Turn of the Screw At the Civic through Nov. 13