Juan Alonso-Rodriguez is the featured artist at Marmot Art Space in December, with paintings and sculpture that audiences should find very accessible.

For example, several canvasses originated with the concept of horizons, says Alonso-Rodriguez, who grew up in Cuba and remembers spending a lot of time with his family looking out to sea.

“While that was a very relaxing experience, as being near the ocean is always so for me, it also brought up the fact that many Cubans were desperate to leave the island and reach the other side of that horizon I loved seeing so much,” says Alonso-Rodriguez, who left Cuba at age 10 to live in Florida with relatives.

The Marmot show marks a return to Spokane for Alonso-Rodriguez, who first exhibited at Eastern Washington University in 1989 at the behest of Ruben Trejo, whose 30-year teaching career at EWU highlighted Chicano and Latino culture (Marmot has also exhibited Trejo’s work posthumously).

In addition to his regular studio practice, Alonso-Rodriguez is dedicated to making public art, such as a recent work depicting hollyhocks near his Seattle-area home.

“Hollyhocks thrive in neglected soil, and I wanted to give those hardy metaphors the regal look in stainless steel,” Alonso-Rodriguez says. The work celebrates the presence and endurance of the Black community in a district formerly redlined, explains Alonso-Rodriguez, when businesses, especially banks but also the federal government, discriminated against individuals and communities based on race.

Alonso-Rodriguez is an advocate for marginalized artists, mentoring them and offering his art space as a platform for women; Black, Indigenous, and other people of color; and lesbian, gay, bisexual, transgender, queer and similar communities.

His advocacy includes speaking to several of Seattle’s arts commissions to suggest that the selection panel include at least one person of color, which is more or less standard practice now, Alonso-Rodriguez says. He has also pushed back against stereotypes against Latinx artists, writing and helping teach a professional development program for Artist Trust.

“My way of thinking is that if I see something is not fair, I have to do something rather than complain about it,” Alonso-Rodriguez says. “We should all really feel a responsibility to educate.”

Alonso-Rodriguez draws the line at telling people what they should experience when looking at his work, however, noting that abstract artwork “offers the viewer the opportunity to add something to the experience. We bring our own thoughts, culture, upbringing, ideas, and viewpoints when we look at art.”

Looking at artwork, including abstract work like his, can and should be challenging, says Alonso-Rodriguez, who welcomes the audience to engage him with questions.

“I hope to demystify art and make it less intimidating than it should ever be,” he says. 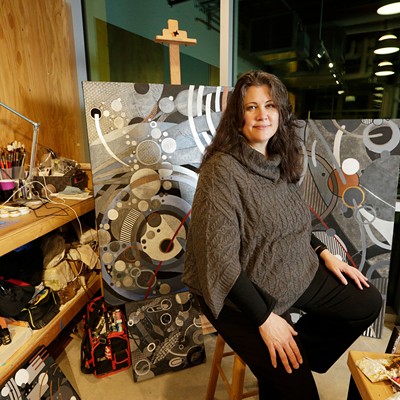