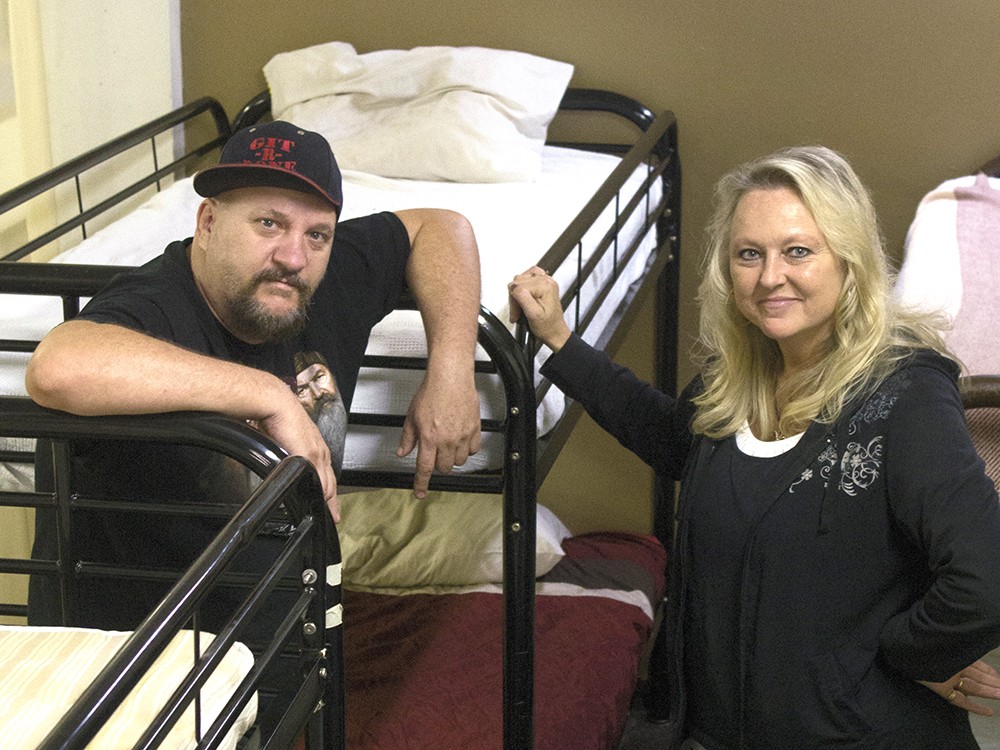 Samuel Sargeant
Marty and Julie McKinney are holding an open house at their shelter on Saturday.

Marty McKinney is a rock of a man. At 45, he’s gruff and heady, wearing a black “Git-R-Done” ball cap over his bare head and a Duck Dynasty T-shirt. He could be a Robertson brother, but with a shorter beard. McKinney scans the room. There are 22 familiar faces at Truth Ministries homeless shelter tonight. Only one guy is new. McKinney doesn’t forget that 20 years ago, he could have been one of them.

“Got any good news today?” he asks.

A young man with a long goatee and a few missing teeth breathlessly describes a job lead, doing construction work for guy he knows. (“He’s talking big,” he says. “Time will tell.”) Another young man says he’s starting school at Spokane Falls Community College in two weeks. His plan is to study computer engineering, and his dream is transfer to a big-name school. (“Stanford or MIT,” he says.)

McKinney asks who wants to lead this evening’s prayer. A recent transplant from Los Angeles volunteers. Head bowed, hands together, his voice is rich and clear as water.

“Heavenly father, thank you for Marty and his wife, Julie, and Truth Ministries for helping us out,” the man says. “Without them, I don’t know where we’d be.”

One by one, the men file into the dining area, sign their names on a clipboard and donate a dollar if they have it. Dinner tonight is hot dogs, potato salad and a bag of Doritos. Dessert is chocolate cake. Blue, a pointy-eared blue heeler, lolls on the floor near the cafeteria tables, her dark eyes fixated on the men’s paper plates.

Three weeks ago, Truth Ministries was on the brink of closing. The shelter sleeps 50 men per night — and even more as the nights get colder — on a $60,000 annual budget. It’s one of three men’s shelters in the city. Scraping together enough money to operate Truth Ministries has always been a challenge for owners McKinney and his wife since they opened the shelter 10 years ago, but it’s gotten harder to elicit donations after the economy collapsed five years ago. Last month, the McKinneys needed $2,800 to cover utilities and repairs, but their accounts were empty. They didn’t know where or who to go to for extra funds. At the time, McKinney said it’d take a miracle to keep them from closing their doors for good.

“I’d come to a place where my faith was in question, my belief in what we were doing,” he says. “When you’re not supported for what you do, it makes it pretty tough to keep doing what you’re doing.”

At a bucket drive two Saturdays ago, their miracle happened. McKinney, wife Julie and a slew of volunteers raised $3,000 in cash and spare change from drivers at Browne Street and Spokane Falls Boulevard. But even though their bills are paid through October, the shelter’s future is far from secure. In November, Julie McKinney says, “it starts all over.”

“This is our life,” she says. “I don’t think we’re asking for too much. We’re just asking to get by.”

In his much younger days, McKinney roamed the Northwest with his rock-and-roll band. They looked like the guys from Poison — long-haired and spandex-clad — and thrashed like AC/DC. He was drinkin’ and druggin’, headed toward divorce and desperately unhappy. One night 20 years ago, his sat in his room, alone save for a bottle of sleeping pills, a half rack of beer and a dusty, paperback Bible.

“Something changes,” he thought. “Or I’m bailing.”

He read the New Testament and he prayed — consistently and ritualistically for months. Reading the Bible, he says, saved life and his marriage.

A decade ago, McKinney quit his job in construction to dedicate his life to ministry. He, his wife, their son and some friends used to walk downtown from 7 pm until 2 am, delivering homemade sandwiches to the homeless and talking about God. They’d start at Division and Sprague and head west before looping around Crosswalk, an emergency shelter for teenagers, at Howard and Second. One sack of burgers turned into more than 200 sandwiches — PB&J, tuna fish, bologna, all kinds. It wasn’t long before their ministry had a brick-and-mortar home.

“God gave us that fire,” Julie says. “And we couldn’t stop.”

They moved their shelter to its East Sprague location in 2005 after losing a lease on their downtown building. A local businessman gave them the keys and a generous mortgage. The space used to be an antique emporium, and it still looks like one. Lattice garden panels skirt the walls near bunk beds with mismatched blankets and pillows. Thrifted couches and used office furniture surround black-box TVs. Retro glass figurines and potted plants line the shelves. A fissure in the ceiling crackles and leaks. Their neighbors down the street are mostly abandoned, boarded-up storefronts. Occasionally prostitutes dawdle nearby with their pimps. Last week, on the night of a fundraiser at Carr’s Corner, someone chucked a trash-bin lid into their window.

But for the McKinneys, this place feels like home; these men are their family. They spend holidays and birthdays here. When someone moves out, breaks an addiction, gets a place of his own, a job and a family, their pride is palpable. When someone dies, their pain is real.

For the men who stay here, Truth Ministries is a temporary respite, a step in the right direction. Police and hospitals will call in the middle of the night and send the McKinneys men who Union Gospel Mission down the street won’t take, or when House of Charity on Pacific Avenue is too full. Guys come in drunk and high, without an ID. But McKinney’s an adherent to the school of tough love. He doesn’t expect them to go cold turkey, but he demands that they work toward it.

“We’re not gonna pull any punches or powder anybody’s tushes. We’re not here to change diapers,” Marty says. “We’re here to say we want to be there for you, but you have to do the work.”

That’s exactly what the McKinneys are doing. They’d like $5,000 a month to cover the expenses of running the shelter and their own income.They don’t need much. McKinney does odd construction jobs on the side for money. Julie McKinney worked as a caretaker for an elderly woman for 10 years and at a Fred Meyer deli for about a month this summer. They’ve never made a real salary from the shelter before, but they’d like to, so they can run it full-time. Eventually, they plan on opening low-income housing for their boys if they can raise the funds to do it.

“To just give up and walk away and let everything we’ve done for the last 10 years go… ” McKinneys says, his voice trailing off. “We’re not giving up without a fight.”

Fifty men will be back on the streets if the shelter is shuttered. Truth Ministries doesn’t have the budget Union Gospel Mission has for advertising and marketing, or the institutional support and government grants that keep House of Charity afloat. This weekend, the McKinneys are holding an open house at the shelter to convince the public that the work they do for the homeless is worth the community’s support.

“If [anyone is] interested in seeing what we do, we open every night at 8 pm. We’re here at 7 pm,” McKinneys says. “Don’t tell us you’re coming. Just walk in the door and watch. You’re gonna see the real thing.”