Marmot skull and crossbones, and 24 other Spokane flag ideas that would make Betsy Ross weep with jealousy

How to draw the current Spokane city flag: Start with two smears of Pepsodent toothpaste on a white backdrop. Then trace your dry erase marker around your coffee cup and fill it in with Wite-Out. Tape a bottle cap in the 2 pm position to the circle and then throw in a few of those family silhouette car decals. Label them "Children of the Sun."

Now, this is the most important part: On the right side, type out "SPOKANE," to differentiate it from all from the other city flags with tiny people waving at you from a little circle.

On second thought, type out CITY OF SPOKANE, so people don't confuse us for Spokane County or, God forbid, the Spokane–Spokane Valley Metropolitan Statistical Area.

And there you have it, Spokane's current flag: 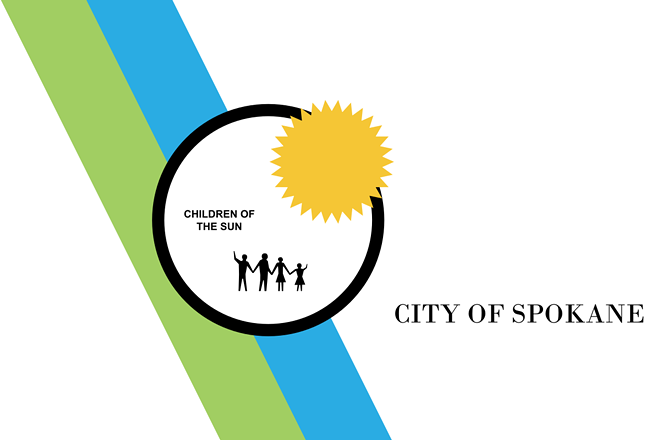 But lately, some local residents have been dreaming up a crazy possibility — what if there were a way to make an even better flag?

Monday night, the Spokane City unanimously passed a resolution to "select a simple, bold, new design for our city flag." The design will be chosen by a work group composed of council members, community members, as well as representatives from the Mayor's Office, Spokane Tribe and the arts commission.

Here at the Inlander, we're more than happy to get a little bit vexillological when the mood strikes us. So to help out all those would-be local flag designers out there, I've contributed some of our most brilliant design proposals.