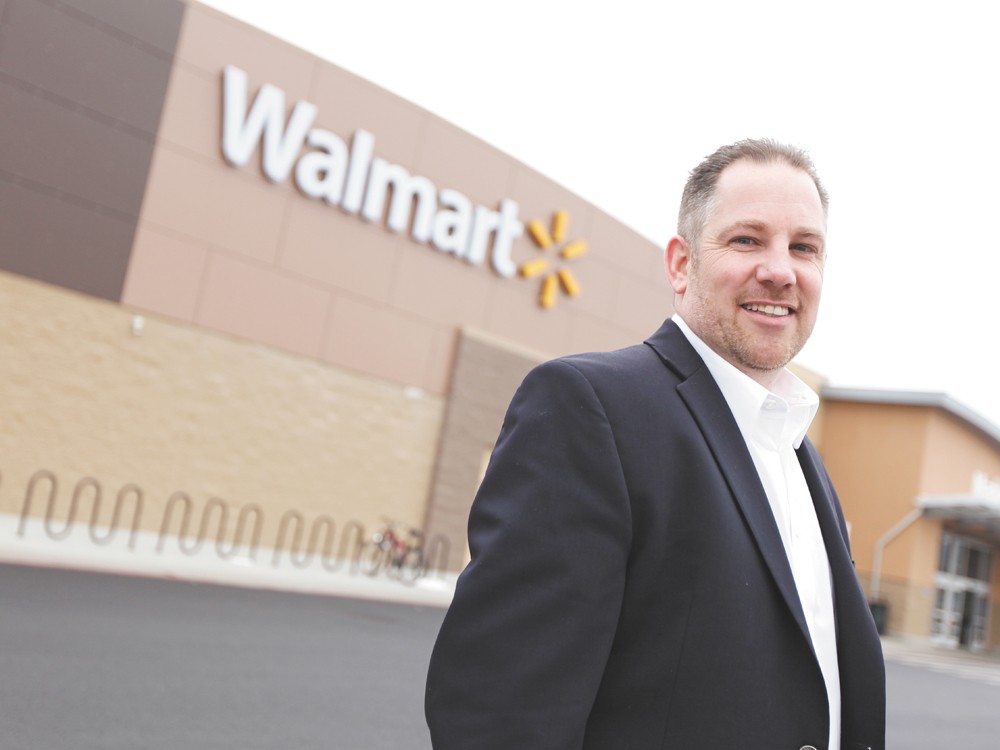 When Walmart tried to build a supercenter on Spokane’s South Hill in 2006, 600 people filled a high school cafeteria, many of them slamming the corporation’s impact on traffic, wages, benefits and surrounding businesses. The outcry worked. Walmart built elsewhere.

But in the more conservative Spokane Valley, the opening of a new Walmart this October not only was uncontroversial — it was celebrated.

In fact, last month, the face of the Walmart manager, Brian Mansfield, topped a billboard paid for by the city of Spokane Valley, proclaiming in giant text: “Spokane Valley has been the best city when it comes to obtaining permits.”

He starred in a television advertisement as part of the same campaign. “The city of Spokane Valley helped us achieve our goals with the permitting process by making it so easy,” Mansfield says in the ad. As jaunty music plays, the camera pans across the store. “They were so willing to come out to the store at any given time. The city is so pro-business-like that they were willing to help get our store open on time on October 17.”

In Spokane and Spokane Valley, candidates campaigned on “pro-business” promises to make permitting swifter and easier. Both have made efforts in that direction, but the Valley is unique in advertising it. It has spent $75,000 of leftover economic development money on print advertisements, billboards and TV and radio spots, bragging about having the “Friendliest Permitting Process in Washington.”

But it wasn’t always so friendly.

Traditionally, says John Hohman, community development director, the Valley was more hands-off. They may have handed the developer a copy of their regulations, pointed them to their website and then let them fend for themselves. But that’s not the case anymore.

Mike Jackson has been city manager since 2010, when former City Manager David Mercier was dumped by the new crop of conservative Spokane Valley council members. Jackson says when the previous community development director retired, he began looking for someone to take the department in a different direction.

“This is something we’ve heard about in the Valley since incorporation,” Jackson says of permitting problems. “It’s common throughout any city — permitting is a challenge wherever you go.”

That’s when Hohman was hired, and he began working on a “roadmap” to improve permitting. The last 18 months have been about turning permit employees from gatekeepers into guides.

“The biggest change is our perspective and attitude,” Hohman says. “We have taken a perspective of not just throwing the rulebook at the applicants, but walking them through all the different regulations.”

That’s meant new reorganization: a new development services coordinator now assists permit-seekers in navigating through all the different phases and departments. Two planners have been moved permanently into the permitting center to provide additional on-the-spot expertise. And the Valley is getting rid of its two “permit specialist” positions and replacing them with more advanced “permit facilitators.”

“What we’re looking for is a more educated, better experienced individual that can help direct people when they come in the door,” Hohman says. If a resident wants to add a garage to their house, for example, they may not even know where to start. A permit facilitator, he says, would have the broad knowledge to help them immediately, instead of passing them off to someone else.

The department also went digital. Hohman dumped a drawer full of paper permitting documents, many out of date, into recycling. Now the forms are online, always updated with the latest version. In 2013, the Valley aims to make it even easier.

“We’re getting away from application forms,” Hohman says.

You’ll be able to walk into the city, he says, sit down, and the permit facilitator will interview you. She’ll ask a series of questions about your project, then fill out your paperwork for you. You won’t have to write a thing.

For the city of Spokane, the permitting overhaul hasn’t made billboards, but the changes may be just as dramatic. It began with a November 2011 “kaizen” event — an intense, in-depth efficiency-management seminar used to solve a specific problem and brainstorm how to cut waste.

The “silos,” Quintrall says, referred to the habit of each department only concentrating on its specific role, without communicating about the project as a whole. Mistakes get made that way.

“We had the customer bring in seven sets of plans to seven different departments,” says Quintrall. “A lot of them were repetitive. So by having everyone in the room and everyone talking to each other, that doesn’t happen.”

Even as Mayor David Condon’s tight budget cut positions, Quintrall began moving her employees to the permitting department: Thanks to restructuring, a department of 10 grew to a department of 30. She says all the changes have slashed the initial response time of 60 days nearly in half.

And in February, the city of Spokane will officially open the “Developer Service Center,” a one-stop shop for anyone in the city needing a permit.

Meanwhile, Walmart’s not the only business praising the Valley. When Tacoma Screw Products opened its new Spokane Valley location last year, the company’s executive adviser, John Wolfe, says he had to go through the typical eight or 10 required permits, including demolition, plumbing, electricity, mechanical permits, site plan reviews, sign codes, even a seismic capacity permit to ensure the storage containers could survive an earthquake.

“It was outstanding,” Wolfe says, praising the Valley’s accessibility. “I’m over in Tacoma, and I could pick up my phone and call any one of the [Spokane Valley] departments. … I ended up feeling like I found some new friends.”

And Dennis Crapo, with Diamond Rock Construction, says that permitting in the Valley has been “extremely difficult” in the past, but that they’ve “improved vastly.”

The question, he says, is whether it will continue to improve. Putting up a billboard claiming to have the friendliest permitting process is one thing, “but a reputation is earned over time.”