After a strong first year in 2021, the new Riverfront Park concert venue is going mostly unused 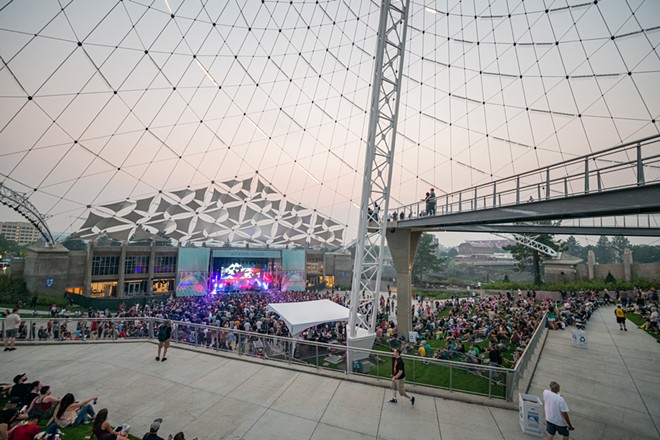 The last few years haven't exactly been a blast when it comes to the live music sector. That whole "global pandemic" thing really threw a wrench in concertgoing.

That said, a major bright spot here in the Inland Northwest emerged last August with the debut of the Spokane Pavilion concert series. While the space certainly wasn't designed for music, throwing together a stage under Riverfront Park's signature tent-like structure from the 1974 World's Fair (and sometimes even illuminating it during the concert) proved to be an excellent and unique concertgoing experience.

The inaugural 2021 slate of Spokane Pavilion concerts saw headliners like Primus, Death Cab for Cutie, Counting Crows, Porter Robinson, and Machine Gun Kelly fill Riverfront Park with sound over the course of a dozen concerts which ran from August to October.

Things looked to be shaping up for another great outdoor concert season when Phoebe Bridgers was the first show of the 2022 concert series announced back in early March.

Eventually, two more concerts were announced: chart-topping singer-songwriter Zach Bryan (who opens the summer festivities with a sold out show tonight) and a co-headlining gig with Iration and Atmosphere (Aug 13).

But that's it so far. The lack of more Pavilion shows has been a topic of conversation for months in music-loving circles.

How did the Pavilion go from hosting a dozen shows in the times of tighter COVID restrictions to only a few this year?

Can three concerts even be called a "series"?

According Spokane Parks and Recreation Director Garrett Jones, it's a combination of factors that have left local concertgoers wanting more.

For starters, Spokane Pavilion concerts are technically a partnership between the Parks department and the massive event promoter conglomerate AEG. It's AEG who books the shows and controls the lineup, while the Parks department handles on-site management. Part of that relationship comes from the Parks department blocking out dates that cannot work for concerts because other community summer events are being held in the park those days (things like Hoopfest or outdoor movies at the Pavilion), and that limits the days AEG can book shows.

"The Pavilion wasn't designed exclusively as a concert venue," says Jones. "We could have 22 concerts if we have 1,000 people at each concert, [but] that takes away to from just the general community experience — whether those are community organization events or some of our legacy events that want to utilize that space. So it's just trying to find that balance. And we're continuing to work with AEG and finding what that balance is."

AEG's heft should be able to land more shows in Spokane (it's the second-biggest presenter of music events in the world behind LiveNation), but that just hasn't translated in 2022. While AEG successfully runs musical powerhouses like Coachella, they're also the organization which wasn't able to successfully run Seattle's Bumbershoot festival and eventually pulled out of the fest in 2019 after only four years. Even Missoula's KettleHouse Amphitheater has a much more substantial lineup than the Pavilion this year (which perhaps might cut into the shows we get in Spokane, as some promoters might see that as a market overlap).

It should be noted that there is no contractual obligation that AEG book a certain number of shows at the Pavilion each year. One would think AEG would book some of the same acts they book for outdoor concerts at Seattle's Marymoor Park, but that hasn't been the case (Bridgers is only example of that this year). (The Inlander reached out the AEG on numerous occasions for comment and never got any response.)

There were also first-year growing pains with the Pavilion concerts in 2021. Some of it was fairly banal things, like behind-the-scenes procedures and concessions management. But there is also the question of what types of shows the Parks department wants booked at the venue and how many tickets they want to try to sell. Jones is partial to shows like the Nathaniel Rateliff & the Night Sweats gig — which brought in a family audience of everyone from toddlers to senior citizens, while also being near capacity.

"It's really finding that that niche for that new facility and having the best customer service experience," says Jones. "So finding those shows that we really want to have at capacity. We can fit about 5,000 concertgoers in the Pavilion."

Part of the excess of concerts last year can actually be explained by the pandemic. The first year of Pavilion concerts was supposed to be 2020 before COVID reared its ugly head, so the 2021 lineup actually consisted of both planned 2021 shows and rescheduled shows from 2020. It was essentially two-years of planned Pavilion shows crammed into a two-month window.

The good news for anxious concertgoers is the 2022 season might still have more on the horizon. According to the Parks department, a fourth Pavilion show should be announced next Monday and there's a possibility that a couple other could be added in the future.

"The ultimate goal is to put the Pavilion on the map," says Jones. "So it's really when artists are looking, and working with their agents on tours, that this really becomes a destination for that outside venue."

While it would obviously be wonderful to see the Pavilion become a go-to spot for artists on summer tours, it's hard to put a venue on the map when there are barely any shows at it.

Samantha Wohlfeil photo
Audience members pumped their hands and moved to the music during Louis The Child's Sept. 15 show.