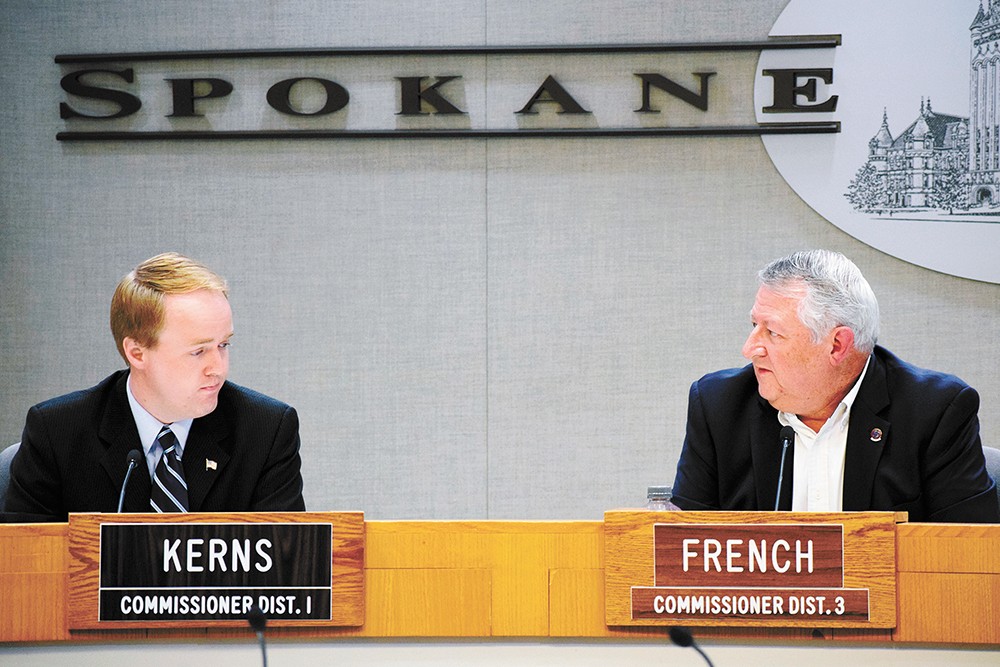 Wilson Criscione photo
Spokane County Commissioners Josh Kerns and Al French argue that hiring a nonprofit to provide legal representation for poor clients will lessen caseloads on defense attorneys and save money at the same time.

Over the past year, Spokane County Commissioner Josh Kerns, Spokane County Public Defender Tom Krzyminski and other county officials have been hosting conference calls with staff from Snohomish County Public Defender Association — a nonprofit organization that Snohomish County contracts with to represent the most needy defendants — to learn more about its model. Commissioner Al French has also been reaching out to officials in other counties that contract with nonprofit law firms.

"It's just something that we thought: 'It's worth exploring,'" Kerns tells the Inlander. "It's just kind of one of those innovative ideas and seeing how it could potentially work here."

Now, county staff are drawing up plans to potentially put out a request for contract bids from nonprofits, according to Kerns.

"This kind of sets in line that that's the direction that we're heading," he says, referring to a coming resolution outlining the county's intent to put out a request for bids. "It would essentially just say that our intent is to move forward and examine this process and develop [a request for proposals] for the process."

French, on the other hand, is essentially sold on the idea: "I'm pretty comfortable with the idea of moving forward on it," he tells the Inlander. "I'm not in that frame of mind where I have to be convinced about the concept."

Union representatives for both the public defenders and their support staff — such as paralegals and investigators — say they feel blindsided: They weren't informed about the interest in privatizing the office until they heard rumors. They also slam the initiative, arguing that it won't improve the quality of legal representation for needy defendants.

"They started this process of looking without contacting any of the unions to let them know what they're doing," says Joe Kuhn, a staffer with Teamsters Local 690, the union that represents the county's public defenders. "I think it's a mistake on their part to try and essentially freelance this thing out."

Kerns says that a nonprofit model has the potential to save money for the county as well as improve the quality of service and lessen caseloads on attorneys. This could be done by giving a nonprofit the flexibility to shift around attorneys doing private sector work into the public defense realm so "no single attorney is overloaded," he says.

"By going to a contracted service and working with a nonprofit, we don't have to be constrained by the caseload restrictions like we are now," French says. "Within the nonprofit, they have the ability to flex cases much more effectively than we do."

Additionally both Kerns and French argue that nonprofits have the ability to take in grants, donations and revenue from private case work, meaning that they have additional revenue to spend on these cases.

"As a nonprofit, they would have the ability to go out and collect other streams of revenue that they can't do today as a county department," Kerns says.

Kathleen Kyle, the executive director of the Snohomish County Public Defender Association, says that while the nonprofit does contract with other jurisdictions for public defense work, they aren't bringing in money through grants or other private defense work. "White-collar clients are not beating our door down," she adds. They have about 60 attorneys.

She says that her staff is already working at "maximum" capacity with their public defense work through Snohomish County, leaving no time for any kind of more lucrative cases on the side. And besides, Kyle says, governments shouldn't rely on the private sector to pay lawyers for needy defendants.

"The funding for public defense comes from the Sixth Amendment and that really is a government function," she says. "Governments should not be looking for private donations to do what is government work."

French, meanwhile, is bullish about the cost-saving prospects of hiring a nonprofit to provide these legal services. He also argues that caseload standards for how many cases public defenders can take on annually — which were set by the Washington state Supreme Court — mandate financial costs on the county by forcing them to hire more staff or risk a backlog of cases.

Jacob Jones photo
Spokane County Public Defender Tom Krzyminski says that inadequate staffing in his office and the high number of cases filed by prosecutors are behind heavy caseloads among his attorneys.

Gordon Smith, a representative of the local chapter of the Washington State Council of County and City Employees (WSCCC), the union that represents support staff at the Spokane County Public Defender's Office, says that the move would be a "bad idea" because the existing staff is experienced and can do the job well.

"I can't imagine that this could be a cost-saver," he says. "I would think that a ton of experience and knowledge would be going out the door if such a move were to be made."

Both Smith and Kuhn say that they plan to demand to bargain over the potential privatization of the office.

Krzyminski, the Spokane County Public Defender, says that while he's been on the conference calls with Kerns and other local officials to learn about Snohomish County's model, he still needs to learn more about the concept. But he adds that his office can theoretically meet the county's public defense needs if it were properly funded and staffed to both handle heavy caseloads and abide by caseload standards for public defenders set by the state Supreme Court.

"I believe we really have to study [it] and make sure that we understand the consequences of moving in that direction," he says. "My concern is addressing the needs we have right now which I don't believe are being met."

At numerous points last year and this year, Krzyminski has delayed assigning felony cases to his attorneys to adhere to caseload standards that dictate that public defenders take on no more than 150 felony cases annually. He routinely points to the Spokane County Prosecutor's Office high case-filing rate — combined with inadequate staffing — as the cause. Currently the Spokane County Public Defender's Office has roughly 60 attorneys, six investigators and eight paralegals.

"We do not have enough attorneys for the cases being filed. I'm not funded to meet those needs," Krzyminski adds. "We delay assigning. We've been in that mode for a few months."

Krzyminski held a meeting with his staff last week to address a "recent rumor regarding our office" and fill them in on the county's interest in privatizing their office. He says that staff were "concerned" about the issue.

He adds that while he's confident his attorneys can find jobs elsewhere, they stand to lose the county's level of pay and benefits: "The county historically has had a very good compensation package."

Kuhn says that the unions have been advocating for increased staffing for years, and that the argument that privatizing public defense could lessen caseloads is "disingenuous."

"We've been fighting with them for additional staff even to the point of investigators and support staff that help them do their job," he says. "It's really just gone on deaf ears."

In response, Kerns points to recent boosts in spending in the Public Defender's Office as evidence that they haven't been ignoring the department, such as funding to keep on two temporary attorneys who were hired last summer. Broadly, the Public Defender's Office budget has increased from $8,642,312 in 2017 to $9,418,879 in 2019, according to figures provided by Spokane County spokesman Jared Webley.

"That's where you get really poor quality bad staffing arrangements because people have out-competed each other to do more for less."

"With any budget discussion, we're limited by the funds available and Tom is not the only department that is asking for more employees," he says. "[Prosecutor] Larry Haskell wants more employees. [Sheriff] Ozzie Knezovich wants more deputies."

The interest in privatizing the Public Defender's Office also comes amidst reports of high turnover in the office and complaints from former staffers that Krzyminski's personal management style contribute to burnout. But both French and Kerns say that the office's leadership isn't driving their effort.

"What I'm talking about is a systematic change to public defense and that's not driven by personnel as much as a system change that will make the system work better," French says.

Krzyminski wouldn't directly comment on the complaints about his management style: "I'm concerned about clients being represented."

Whether the potential future nonprofit model would be one contractor or a variety that would split the workload is unclear. Kerns says that he primarily envisioned one single nonprofit entity that would take on all of the county's work. French, meanwhile, says that he's open to having numerous organizations compete for the county's public defense work.

"You've already got a number of nonprofit law firms here in town, so it would be nothing for them to take on the public defender caseload and expand their scope of work," he says.

Other Washington counties have experience with privatized public defense. Prior to 2013, King County contracted with four nonprofits. In 2006, a public defender filed a successful lawsuit against that county, arguing that they were effectively county employees who were treated as contractors; King County has since folded the nonprofits into its Department of Public Defense.

When asked if he was concerned about the potential for a similar lawsuit that prompted King County to move away from its nonprofit model, Kerns says that he hasn't considered it thoroughly: "It's something that will have to be looked at. Not something we've discussed yet."

"When you have more than one [nonprofit], by definition, you have a hungry neighbor that is all too willing to step up and do the work for a little less or under less appropriate conditions," she says. "That's where you get really poor quality bad staffing arrangements because people have out-competed each other to do more for less."

In some cases, she recalls, nonprofits would accept flat-fee contracts for unlimited caseloads that didn't include enough compensation for adequate staffing, in part because they were competing for work. This resulted in attorneys having inadequate time to work cases.

The original print version of this article was headlined "Outsourcing Defense"